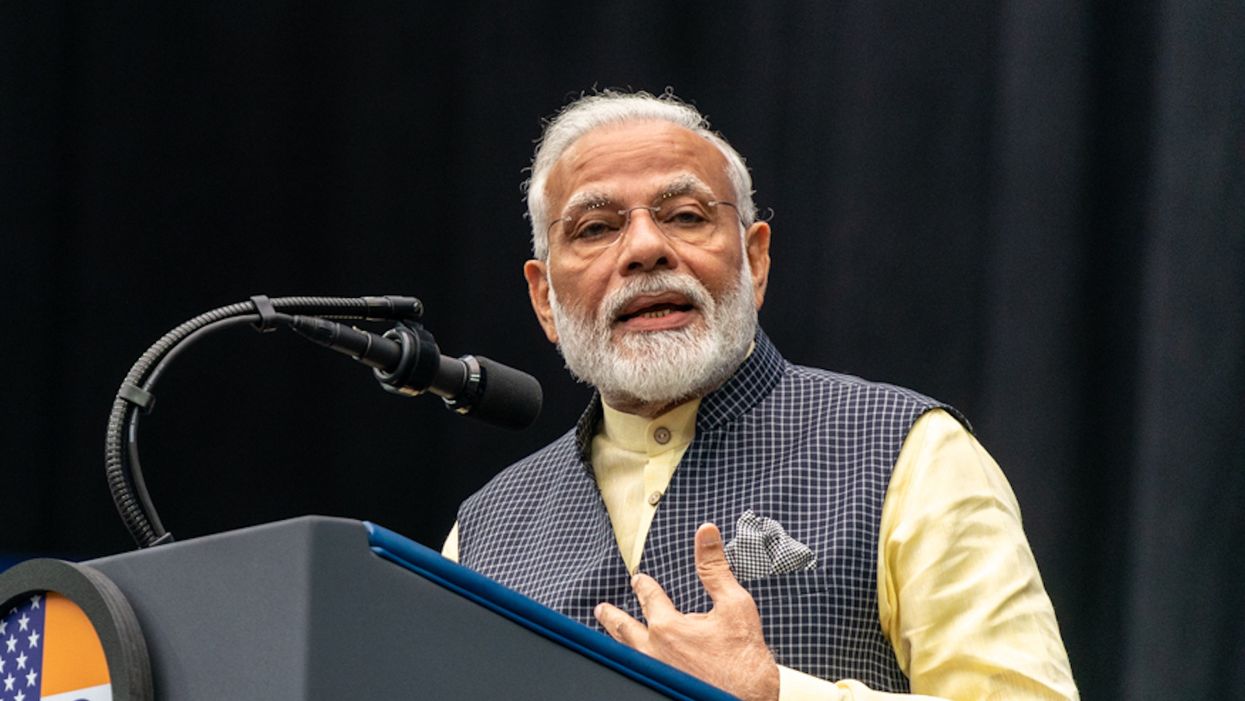 Prime Minister Narendra Modi of India addresses his remarks on stage Sunday, Sept. 22, 2019, at a rally in honor of Prime Minister Modi at NRG Stadium in Houston, Texas. (Official White House Photo by Shealah Craighead)
Prabir Purkayastha
and
Globetrotter
May 06, 2021

The COVID-19 pandemic continues its brutal march across India. Figures of new infections reached 355,828 on May 3—which accounted for more than 62 percent of the world's new infections on that day. As hospitals run out of beds, ICU capacity, and even oxygen, these factors have been contributing to the already skyrocketing death toll in the country. Dead bodies in mortuaries, crematoria and burial grounds speak of the awful toll of the pandemic.

India's daily numbers of COVID-19 cases have outstripped infection rates in other countries like the United States and Brazil. The end of the surge is nowhere in sight as more states and cities slip into the grip of the pandemic. The new confirmed cases are rising quite steeply in states like Karnataka, Bihar and West Bengal even as numbers in cities like Mumbai and Delhi are beginning to flatten. What is more worrying is that the positivity rates are rising quite steeply, indicating that the actual number of infected people is even higher.

After the first wave subsided in December 2020, the BJP-led government of Prime Minister Narendra Modi declared victory against the pandemic. Perhaps it truly believed in its own propaganda. At any rate, it was busy, chest-thumping on its great success. At the World Economic Forum in January, Modi said, "In a country which is home to 18 percent of the world population, that country has saved humanity from a big disaster by containing corona effectively." The BJP's National Office Bearers meeting in February applauded the Modi government's performance in keeping the first wave of the virus under check. "The party unequivocally hails its leadership for introducing India to the world as a proud and victorious nation in the fight against COVID," said a press release issued by the BJP. This pyrrhic victory and these vainglorious claims are doubly painful as India grapples with a second wave that makes the first wave seem like a trailer.

The BJP was focusing on how to convert this so-called success into electoral victory in state elections when the second wave struck. As the numbers began to rise, the BJP decided that if it could not control the pandemic, it would try to control the narrative. It went on the offensive, with its troll army amplifying the message that the state governments have failed; people are to be blamed for abandoning the safety norms of masks and social distancing; everyone is to be blamed but the Modi government. This, notwithstanding the central government's signal of a return to normalcy by holding public rallies, election campaigns and huge religious gatherings such as the Kumbh Mela. If people did relax their adherence to the COVID-19 norms, they were only following the example of the leaders—Modi and others—on the dais during political rallies and roadshows, who appeared maskless while addressing large crowds during these events.

The first COVID-19 wave in India peaked around mid-September in 2020, touching nearly 100,000 new infections per day. It had gone down to about 10,000 by mid-February. This period should have been used to strengthen the public health system: increasing the numbers of hospital beds and ICU facilities, stepping up oxygen production and building a supply chain for delivery of medical oxygen. Tragically, the central government, which has centralized all powers under the Disaster Management Act, refused to prepare itself, or the states, or the public, for this second wave.

The worst failing in the current crisis is the lack of oxygen supply. When the lungs of patients are affected due to the virus, the most important medicine is oxygen. This shortage of oxygen has added to the rising death toll, as patients requiring oxygen are unable to get admissions in hospitals; they are dying as hospitals run out of oxygen; and oxygen cylinders are not available for home treatment. During the last week of April, several hospitals in Delhi reported that they had only a few hours of oxygen left. Failed oxygen supply has resulted in the deaths of patients in various hospitals, even in elite hospitals in the capital. If this is the situation in the nation's capital, and that too in elite hospitals, one can only imagine the plight of hospitals elsewhere in small towns and rural India.

That is the core of the current crisis. The major reason for deaths during a pandemic is when the number of serious patients outstrips the availability of hospital beds and the supply of oxygen. That is when fatalities start mounting. This is the case now in India.

In the first wave in India, the spread was limited to a few states, and to certain densely populated areas. This time, it is spreading across almost all states, and affecting a much larger cross-section of people.

Why didn't the government prepare for a rise of this magnitude? This government is, unfortunately, completely centralized; only the prime minister and his trusted lieutenant, Amit Shah, the home minister, can act. The other ministers are harnessed only to dismiss any criticism, even constructive criticism—from former Prime Minister Manmohan Singh, for example. Modi's sights were set on winning the elections in the east, particularly West Bengal where the BJP recently faced a decisive defeat. Modi continued to hold political rallies and only stopped when he realized the poor optics of being in electioneering mode amid a major pandemic. By then it was too late, and his poor handling of the situation on the ground led to his party's defeat in the West Bengal elections.

The central government has also failed to ensure a smooth vaccination rollout and has provided misleading information about vaccinations, which might not address the immediate crisis, but will help with controlling any future waves that may follow by creating herd immunity. The government's announcement about having vaccinated 157 million people as of May 3 is misleading. While 157 million vaccine doses have been given, only about 27 million people have received the two required doses as of May 3.

At the beginning of April, states such as Maharashtra, Delhi and Punjab were complaining about their vaccine supplies running low. Health Minister Harsh Vardhan dismissed these complaints by states as politicizing their "failures to control the spread of pandemic." The figures of vaccinations, however, reflect a different reality than the one claimed by the health minister and show that the number of vaccine doses given per day has indeed fallen drastically in mid-April in comparison to what it was in early April.

With the vaccine supply still constrained, the Modi government has failed to explain why it is now proposing that everyone above the age of 18 be vaccinated under the third phase of its vaccination drive. No explanation has been offered, nor a plan announced on how the country will ramp up its production and delivery to meet the expanded target.

The central government has mostly abandoned its responsibility to ensure that vaccines are available for the entire population, after its initial push to inoculate health workers and people above the age of 45. The government said that it will continue to provide 50 percent of the country's vaccine production to states and union territories for free under the third phase of the National Vaccine Strategy. The rest of the 50 percent will, however, have to be acquired by the state governments and the private hospitals from the two vaccine suppliers in India—Serum Institute of India and Bharat Biotech. The center has also removed all price controls on vaccines, creating a competition for scarce vaccines among the states, which will ultimately benefit the private suppliers. Instead of a well-thought-out plan to increase vaccine production, distribute it centrally and vaccinate all the people, this appears to be a cynical exercise in abandoning the central government's responsibility and shifting the blame to the state governments for failing to vaccinate the people.

The Indian Council of Medical Research (ICMR) and the National Institute of Virology (NIV), in collaboration with Bharat Biotech, had developed Covaxin. There is no reason why ICMR-NIV should not have given licenses to other vaccine manufacturers, including half a dozen public sector units that are idling today, to ramp up production of this vaccine. Instead, the Modi government granted the rights to produce the vaccine, which was created with public-sector technology and public money to Bharat Biotech only. And no explanation has been given about why the Modi government refused to take issue with the United States on its denial to provide vital supplies for the production of vaccines in India until it reached the current crisis.

The Modi government believes in centralizing all political power in its hands and letting the "free market," led by big capital, solve the problems of the country. And if this policy fails, it can always blame the state governments, the anti-national forces and, finally, the opposition for its own failures.

This article was produced in partnership by Newsclick and Globetrotter. Prabir Purkayastha is the founding editor of Newsclick.in, a digital media platform. He is an activist for science and the free software movement.