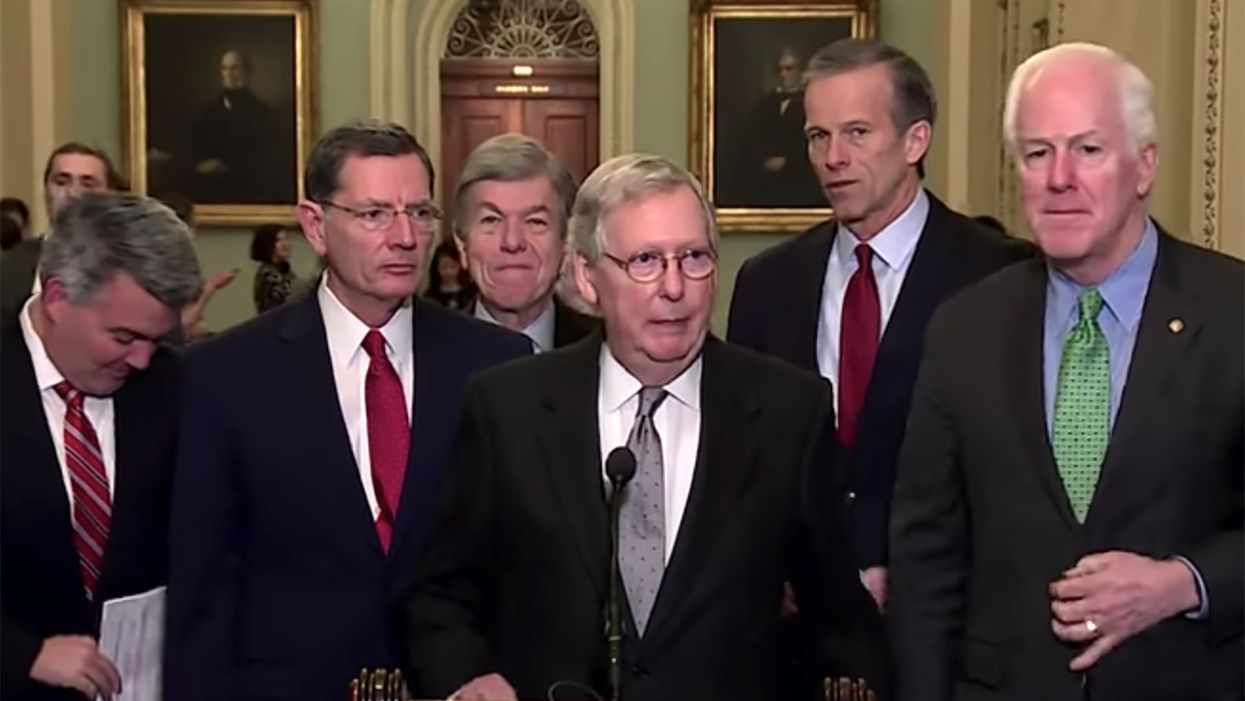 Image via Screengrab.
John Wight
and
The New Civil Rights Movement
May 27, 2021

CNN reported Thursday that Senate Minority Leader Mitch McConnell has been begging GOP senators to vote against a bill that would establish an independent commission to investigate the pro-Trump insurrection at the Capitol on Jan. 6.

"Within the last 24 hours, McConnell has doubled down, started reaching out to particular senators he was afraid might be wavering, and asked them to vote against the commission, quote, 'as a personal favor,'" CNN's Jamie Gangel reported.

Host John King noted that it's not uncommon for a leader to ask members of their caucus to vote a certain way as a favor.

"Exactly right, and I'm told the senators were really caught by surprise at his using that kind of language, and just how insistent he's been," Gangel responded. "One Republican source said to me, quote, 'No one can understand why Mitch is going to this extreme of asking for a personal favor to kill the commission.' The source went on to say, 'How can you have an attack on the Capitol and the Republicans leader is saying vote against it?' The source ended by saying, 'It is despicable.'

"Our sources are suggesting that Mitch McConnell may really have been concerned that Mrs. Sicknick's visit today would sway some Republican senators." Gangel added. referring to the mother of fallen Capitol Police officer Brian Sicknick, who is lobbying in support of the commission.

Earlier Thursday, McConnell spoke against the commission on the Senate floor, saying "the role of the former president has already been litigated exhaustively in the high profile impeachment trial."

"I do not believe the additional extraneous commission that Democratic leaders want would uncover crucial new facts or promote healing," McConnell said.

CNN reported that Republican senators are expected to block a bill that would establish the commission as early as Thursday: "The refusal of at least 10 Republican senators to vote for the commission underscores the deeply partisan divide that has emerged over the insurrection earlier this year and comes at a crucial time for Capitol Hill where Democrats are struggling to advance President Joe Biden's agenda. Some Democrats are citing the resistance by Republicans as a sign for why the Senate should blow up the 60-vote threshold to pass most legislation, given the narrowly divided chamber."

Watch the two clips, and check out a few reactions, below.

Mitch McConnell has reached out to certain Republican Senators and asked them to vote against the commission as “a… https://t.co/2auAIGKRDe
— Acyn (@Acyn) 1622132036.0

McConnell: and obviously the role of the former President has already been litigated exhaustively in the high profi… https://t.co/MzGzxNhXW8
— Acyn (@Acyn) 1622126868.0