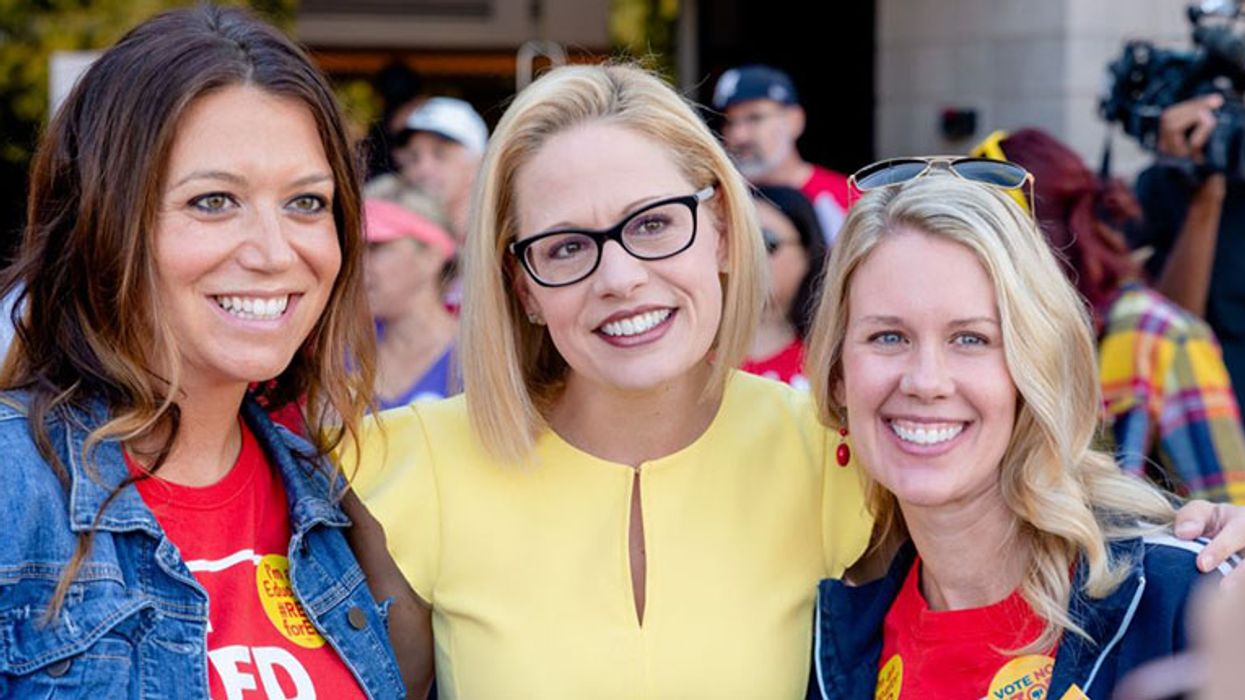 If you're worried about Senate Democrats failing to pass key elements of President Joe Biden's agenda, you're not alone.

"The longer we wait, the more anxious we become," Sen. Dick Durbin of Illinois told The Hill, adding, "We have a lot to do, and a limited amount of time."

Durbin seems to be channeling a broader sense of unease that's spilling into impatience for most of the Senate Democratic caucus as bills related to voting rights, immigration, police reform, gun control, and infrastructure pile up on their doorstep.

Majority Leader Chuck Schumer has finally started to lower the boom on GOP obstruction aided by the diddling of Democratic Sens. Joe Manchin of West Virginia and Kyrsten Sinema of Arizona.

This week, Schumer filed for cloture on a bill creating a commission to investigate the Jan. 6 insurrection at that Capitol, and he set an expiration date for bipartisan negotiations on Biden's American Jobs Plan.

"It has always been our plan—regardless of the vehicle—to work on an infrastructure bill in July," Schumer said Tuesday. "That's our plan, to move forward in July."

In other words: Time's up in July, Joe—you either find those 10 GOP votes or it's over.

Naturally, Manchin pushed back. "There's no magic date and there's no magic time," he said on Tuesday. Except that the leader of his caucus says there is a magic date and time—July. That is now the point at which the Democratic caucus as a whole will officially turn to holdouts like Manchin and say, You're the problem now, not Republicans.

It may not feel particularly satisfying at the moment, but it's the official start of a countdown, and that's worth something.

Manchin and Sinema will also get their first taste of GOP hypocrisy this week with a likely vote on the bipartisan Jan. 6 commission bill passed by the House last week. The deal brokered by Democratic Rep. Bennie Thompson of Mississippi and GOP Rep. John Katko of New York divides the 10-member commission up evenly between Democrats and Republicans and grants all of them subpoena power. House Speaker Nancy Pelosi effectively met all of the demands made by GOP Minority Leader Kevin McCarthy only to have him and Senate Minority Leader Mitch McConnell trash the bill in the end as a "purely political exercise."

That was how McConnell framed the bill to reporters after a lunch meeting with his caucus on Tuesday. In that same closed-door luncheon, McConnell also revealed his purely political reasons for blocking the bill, according to Politico.

"McConnell warned his caucus Tuesday that the report could be released in the middle of the 2022 election cycle, when control of the House and Senate are at stake," writes Politico.

Ah, yes, the cover up—a Trump-era GOP staple. While several congressional committees have heard testimony related to the security failures on the day of the siege and what led to them, the nation still knows next-to-nothing about the origins of the attack on the Capitol. And McCarthy and McConnell are now staging a McCover Up to make McCertain American voters won't get a thorough accounting of whether and how Republicans aided and abetted the deadly Capitol riot.

Democratic Sen. Tim Kaine of Virginia told The Hill that a GOP filibuster of that bipartisan commission would ultimately force a deeper discussion within the caucus about the extra-constitutional mechanism Republicans are using to stymie Democratic progress on multiple fronts.

"I think if the Republicans filibuster Jan. 6, I don't know that we'll change any Senate rule … but it will then become very key to the voting rights discussion," Kaine explained.

Manchin and Sinema also seem to understand the stakes of that commission vote and the backlash they will endure if congressional Republicans—who dedicated two years, $7 million, and 33 hearings to a special Benghazi probe that had already been investigated by seven other congressional committees—block that bill.

On Tuesday, Manchin and Sinema issued a joint statement begging Republicans to "work with us to find a path forward on a commission to examine the events of January 6."

Sure, it's pathetic. But in a sense, it's also Manchin and Sinema publicly telling Republicans that their filibuster of a bipartisan Jan. 6 commission will prove indefensible—even for them. It's not definitive, but it's an acknowledgment that their bipartisan schtick—which is already wearing thin—could eventually become untenable.

That's an important marker as infrastructure negotiations continue and Democrats begin in earnest to take stock of where the caucus stands on critical voting rights legislation and, specifically, the For the People Act, otherwise known as H.R. 1 and S. 1.

"We still have to sort of make the case to some of our members that the filibuster is an obstacle to bipartisan compromise and I don't think that's happened yet," said Sen. Chris Murphy of Connecticut. It seems an obvious point, but Senate Democrats who are clear on the matter could use a vote like the Jan. 6 commission to help prove their point—along with the reality that bipartisan compromise simply won't be achievable on many of the measures currently being considered.

On Wednesday, Senate Democrats are scheduled to hold a meeting on the For the People Act, which would overhaul federal elections and help turn back the wave of voter suppression bills Republicans are passing at the state level. According to The Hill, Democrats held a meeting on the measure earlier this month but Manchin wasn't in attendance as he traveled his home state with First Lady Jill Biden.

Wednesday's meeting, explained Sen. Kaine, is designed to pinpoint exactly where all the Democratic senators stand on the bill and what changes might help get it to 50 votes with Democrats alone.

"The real key is making every Democrat declare where they are," Kaine said. "And if they don't like it, well what don't you like about it? Can we change this or that?"

What's important to keep in mind with all of these proposals—including those on immigration, guns, police reform, and Biden's American Families Plan—is that they don't exist in isolation. It's an entire legislative ecosystem in which progress or stagnation on any one effort affects all of them. As Senate Democrats run up against GOP obstruction on the Jan. 6 commission and immigration and Biden's jobs and families plans, for instance, the prospects of utilizing reconciliation to pass some and even making meaningful changes to the filibuster to pass others improves for all of them.

So using deadlines and votes as barometers is key to gauging the changing environment and Democratic prospects for success.