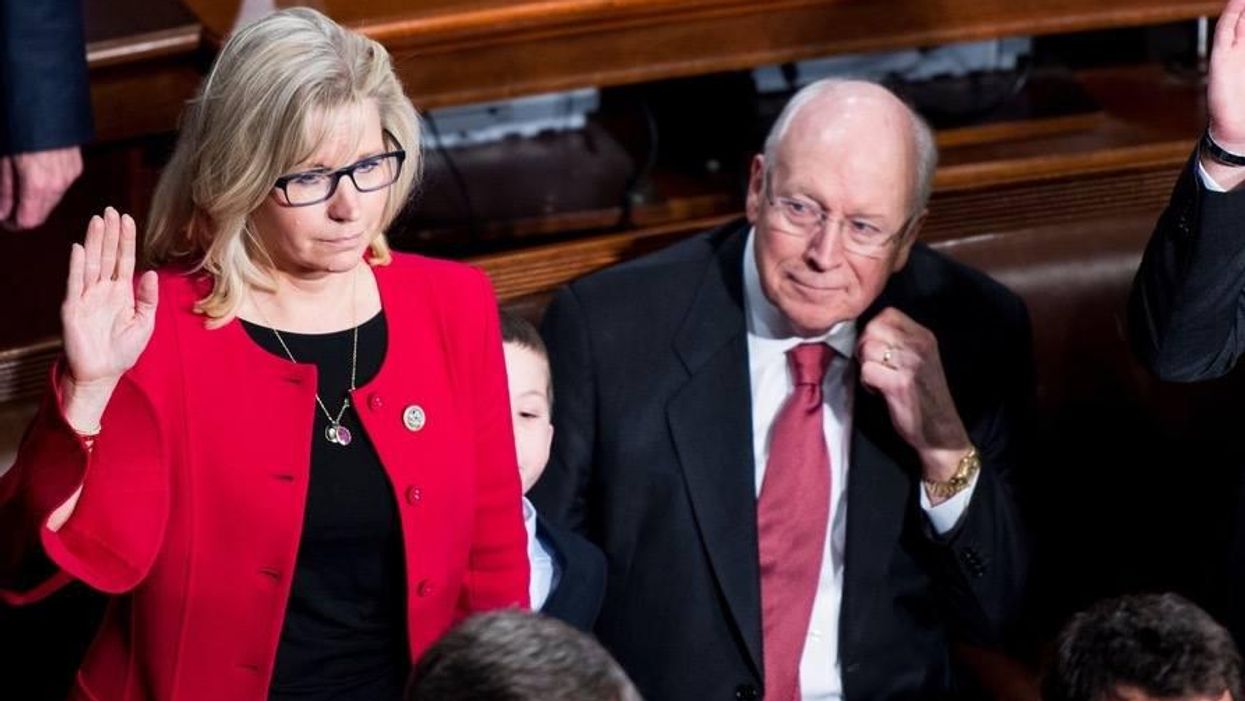 In 2021, arch-conservative Rep. Liz Cheney of Wyoming has often found herself being praised by an unlikely combination of liberals, progressives, Democrats and Never Trump conservatives while being lambasted by former President Donald Trump and his devotees, who now view the 54-year-old GOP congresswoman as a RINO (Republican in Name Only) for acknowledging Joe Biden as the legitimately elected president of the United States and calling out Trump's voter fraud claims as a flat-out lie. The words "profile in courage" are being used to describe Cheney by Trump critics on both the left and the right. But one anti-Trump journalist who is being critical of Cheney is Adam Serwer, a staff writer at The Atlantic.

In an article published this week, Serwer argues that the authoritarianism in the GOP is something that Cheney helped bring about.

Serwer explains, "Liz Cheney, the representative of Wyoming, the daughter of a former vice president, and a lifelong conservative Republican, is facing a purge. Cheney's transgression? She has continued to insist, truthfully, that former President Donald Trump's claims about the 2020 election are false, after having voted to impeach him in March for inciting a mob that stormed the Capitol in an attempt to overturn the result. Yesterday, Steve Scalise, the No. 2 Republican in the House, publicly advocated for removing Cheney from her leadership post as the third-ranking House Republican, and replacing her with Elise Stefanik, who has obsequiously amplified Trump's lies about voter fraud."

In his article, Serwer joins others in saying that if Cheney is removed from her leadership position by House Republicans, it will send out a dangerous message.

"Cheney's fall will ensure that ambitious Republicans eschew the folly of respecting the outcome of elections that the GOP loses," Serwer warns. "They will all understand that the only acceptable outcome of political contests is Republican victory, and that any system that allows for the possibility of defeat is illegitimate…. Even a lifelong conservative Republican like Cheney becomes the enemy if she is willing to uphold essential democratic rights — such as the opposition's right to govern if it wins the most electoral votes — above the whims of King Trump."

Serwer acknowledges that Cheney is gutsy for taking a stand against Trump at a time when so many other Republicans are cowering in fear of him, but he stresses that there are many unsavory things in her history that shouldn't be forgotten.

"The (Republican) Party's rejection of the rule of law is also an extension of a political logic that Cheney herself has cultivated for years", Serwer explains. "During the Obama administration, Cheney was a Fox News regular who, as was the fashion at the time, insisted that the president was secretly sympathetic to jihadists. She enthusiastically defended the use of torture, dismissed the constitutional right to due process as an inconvenience, and amplified the Obama-era campaign to portray American Muslims as a national security threat. Until the insurrection, she was a loyal Trumpist who frequently denounced the Democratic Party."

Serwer also points out that "in 2010, Cheney launched a McCarthyite crusade against seven unnamed attorneys in the Obama-era Justice Department who had previously represented terrorism suspects held in the detention camp at Guantánamo Bay…. Cheney smeared them as terrorist sympathizers, as the enemy."

"Cheney's courageous stand against the party of Trump is a stand against a party she helped build, a monster she helped create," Serwer argues. "The tragedy is not that she might suffer for her folly, but that American democracy will. Her latter-day epiphany is welcome, but it also comes far too late."