'The GOP is destroying democracy': Alabama GOP hit with a barrage of criticism after curbside voting ban 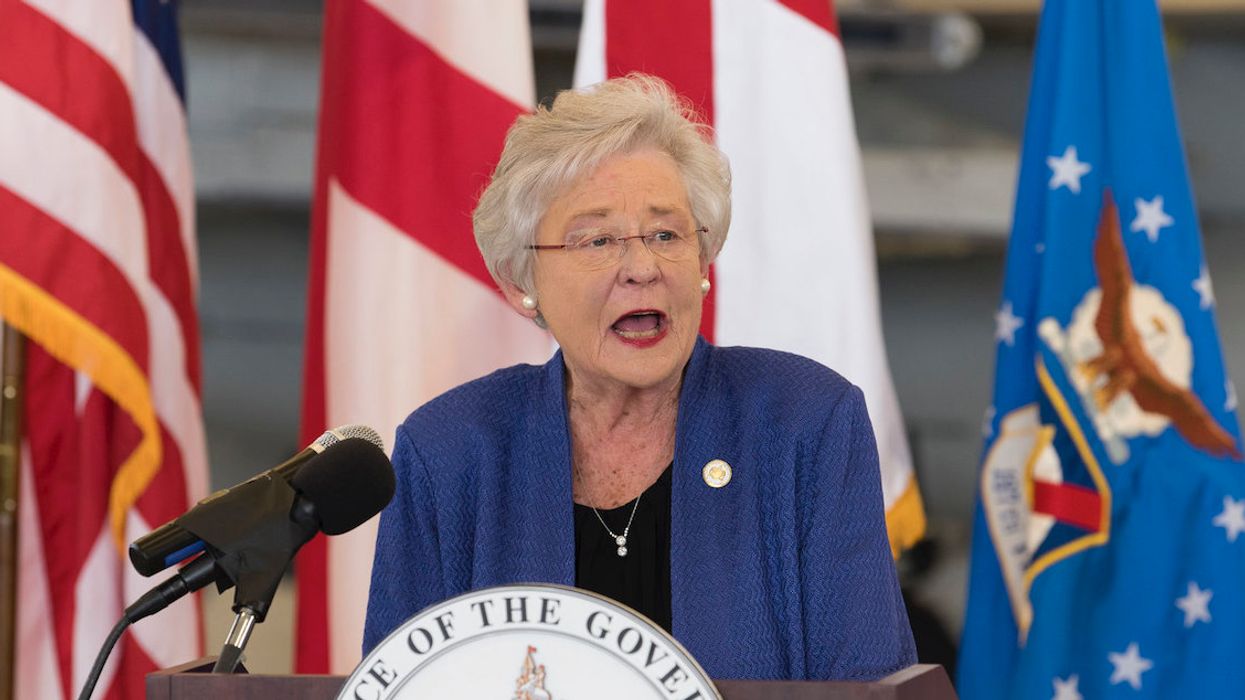 Alabama Governor Kay Ivey hosted a press conference at the 187th Fighter Wing to announce that Secretary of the Air Force Heather Wilson had selected Dannelly Field Air National Guard Base, Ala., as a preferred location for the F-35A aircraft Dec. 21, 2017, on base. Dannelly Field and Truax Field Air National Guard Base, Wis., were chosen as preferred alternatives until Wilson makes the final basing decisions after the requisite environmental analysis is complete. (US Air National Guard photo by Tech. Sgt. Chris Baldwin)
Lauren Floyd
and
Daily Kos
May 30, 2021

First, Alabama Gov. Kay Ivey came after women, signing into law in 2019 a bill outlawing abortions, even for victims of rape and incest, except when medically necessary. Then, she targeted transgender youth and signed into law on April 23 a bill prohibiting the children from participating in public school sports. Now, Ivey's targeting people with disabilities.

The Republican governor signed a bill into law on Wednesday to ban curbside voting and in effect make casting ballots more difficult for people with disabilities. The unfortunate law prohibits placing voting machines outside of voting places and prevents poll workers from taking ballots into or out of voting places except when done as part of the established process to transport ballots. The bill sponsored by Republican Rep. Wes Allen was passed by the Alabama House of Representatives in a 74-to-25 vote on March 18 and pushed through by the Senate in a 25-to-6 vote on May 17, the last day of the legislative session, the Montgomery Advertiser initially reported. The ACLU of Alabama tweeted: "With our state is in the middle of a devastating pandemic and economic downturn, what is the Alabama Legislature doing? Passing bills that burden or attack Alabamians."

Ivey didn't mention curbside voting ban's potential impact on people with disabilities in her press release bragging about rubber stamping Republican Alabama Secretary of State John Merrill's voter suppression effort. "Our freedom of speech is rooted in our ability to vote," she instead said. "A strong election process is what sets our democracy apart from every other country in the world." Protecting the electoral process has become a popular guise for voter suppression tactics embraced throughout the country among Republicans following a triple loss for the party, last year in the White House and in two U.S. Senate runoff races effectively flipping the Senate from majority Republican to majority Democratic.

Maria Schell-Cannon, a mother and educator, called the new Alabama law "disgraceful' in a tweet on Wednesday. "This doesn't prevent fraud, just mks it more difficult 4 the disabled & elderly 2 gt 2 the polls," she said in the tweet. "Sad! The GOP is destroying democracy." Randy Wilson, a real estate investor and father, tweeted on Thursday: "No lottery. No expanded medicaid. No effort to rewrite the antiquated constitution. BUT, we made it a priority on the last day in session to ban curb side voting without a single case of curbside voting or any significant voter fraud. C'mon Alabama..."

Some examples of accessibility issues that were documented by volunteers during 2020: ◾ A church in Huntsville had… https://t.co/Y9TJM2Vcqf
— ACLU of Alabama (@ACLU of Alabama) 1616681626.0

Voters and activists brought up the subject of curbside voting last year in a federal lawsuit criticizing voting laws that didn't take into account health risks during the COVID-19 pandemic, and a federal judge sided with activists, AL.com reported. Merrill and Attorney General Steve Marshall, however, successfully appealed the decision, getting the U.S. Supreme Court's permission to ban curbside voting. Justice Sonia Sotomayor wrote in the dissent opinion that Merrill "does not meaningfully dispute that the plaintiffs have disabilities, that COVID-19 is disproportionately likely to be fatal to these plaintiffs, and that traditional-in-person voting will meaningfully increase their risk of exposure."

Sotomayor also highlighted in her dissent the account of Howard Porter, Jr., a plaintiff in the case and a Black man in his 70s with asthma and Parkinson's Disease. He said in district court "many of my (ancestors) even died to vote. And while I don't mind dying to vote, I think we're past that. We're past that time." Alabama Republicans apparently disagree.