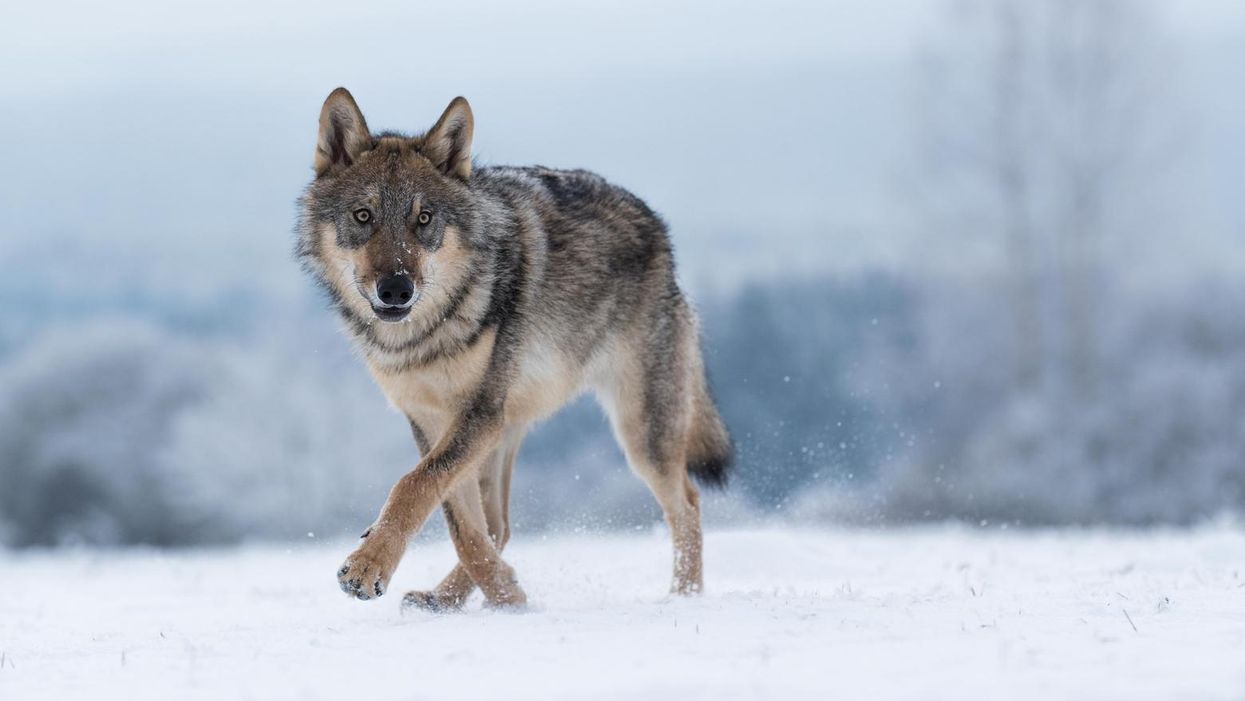 Wildlife advocacy groups are sounding the alarm about a new "extermination" law in Idaho, signed this week by GOP Gov. Brad Little, that will allow hunters and private contractors to kill up to 90% of the state's gray wolf population—about 1,350 animals.

"Backed by an array of misinformation and fearmongering, the state Legislature stepped over experts at the Idaho Fish and Game Department and rushed to pass this horrific wolf-killing bill," said Andrea Zaccardi, a senior attorney at the Center for Biological Diversity, in a statement.

"And Republican lawmakers have promised that this is just the beginning, even though the new measure would doom 90% of Idaho's wolves," Zaccardi noted. "We're disappointed that Gov. Little signed such a cruel and ill-conceived bill into law."

Before Little approved the measure, Fast Company reported that "it's one of a handful of Western states' aggressive pushes to cull predator populations. But, this one goes a step further: hiring hitmen for wolves."

The law increases the funds allocated to Idaho's Wolf Depredation Control Board from $110,000 to $300,000. According to Fast Company:

With that money, the bill calls for hiring private contractors to kill (or, using the bill text's language, "dispose of") wolves. In past years, wolves were killed via controlled hunting seasons, or government bodies like the Wildlife Services (a federal body whose job it is to keep animal populations down); the use of these contractors is "unprecedented," Zaccardi says. The bill explicitly empowers these freelance assassins to use creative ways to shoot wolves, including from ATVs, snowmobiles, and motorized parachutes.

The development in Idaho follows a series of anti-wolf bills in Montana signed into law this year by Republican Gov. Greg Gianforte—who violated his state's hunting regulations in February, when he killed a black wolf on a private ranch near Yellowstone National Park.

A rider proposed by congressional Republicans and attached to a federal budget bill a decade ago stripped gray wolves of Endangered Species Act (ESA) protections in Idaho, Montana, and parts of Oregon, Utah, and Washington state. The Trump administration's delisting of gray wolves in the lower 48 states took effect in January.

Critics of the recent delisiting highlighted conditions in Idaho to make the case for retaining national ESA protections. Last September, conservationists revealed that a record-breaking 570 wolves, including dozens of pups, were brutally killed in the state over a recent one-year period.

Samantha Bruegger of WildEarth Guardians said at the time that "Idaho's reckless, violent, massacre of wolves and their pups not only showcases the worst of state wildlife 'management,' it shines a light on the darkest corners of humanity."

Other leaders at the organization echoed that sentiment this week.

"WildEarth Guardians and our allies filed a lawsuit 10 years ago in an attempt and overturn this undemocratic, spiteful wolf rider because we believed the wolf delisting rider violated the U.S. Constitution," noted executive director John Horning.

"While our lawsuit wasn't successful because Congress simply closed the courthouse doors," Horning said, "the hateful and ongoing attempts to completely decimate wolf populations in Idaho and Montana warrant national outrage and action by Congress to restore wolf protections in the northern Rockies."

"These types of actions were not only deplorable in the early 1900s, but they have zero place in science-based management of a keystone species in 2021, especially in the midst of a biodiversity crisis and nature crisis," she warned. "We must not abandon fragile wolf-recovery efforts and allow anti-wolf states, hunters, and trappers to push these iconic species back to the brink of extinction."

Why are Montana lawmakers pushing to hunt more gray wolves, after they were nearly wiped out completely? Conservat… https://t.co/uS4fXMFpAZ
— Vox (@Vox)1618256945.0

Western Watersheds Project similarly blasted the new laws, and the legislators behind them, as politically motivated rather than informed by science.

"These bills recall the anti-predator hysteria of the early 1900s that originally led to the near-extirpation of wolves from the lower 48 states, and represent a gross overreach by Montana and Idaho's legislative bodies," said Jocelyn Leroux, the project's Washington and Montana director. "Rather than allowing science and agency professionals to be the leading voice in wildlife management, these state legislatures instead have executed a blatant power grab on behalf of a small group of anti-predator fanatics."

"The campaign to exterminate wolves continuously disregards facts," Leroux charged, pushing back against claims about wolves causing livestock losses. "This type of uncontrolled slaughter is what led to the original listing of gray wolves and will have broad ecosystem impacts."

Talasi Brooks, staff attorney for Western Watersheds Project, pointed to the measures as proof that action is needed at the federal level to protect gray wolves.

"The actions of Montana and Idaho this year show that these states are unfit to manage large predators," Brooks said. "Federal supervision is necessary to make sure wolf management is based on sound science and not directed by anti-wildlife extremists. We will be keeping a close eye on wolf populations in the northern Rockies."