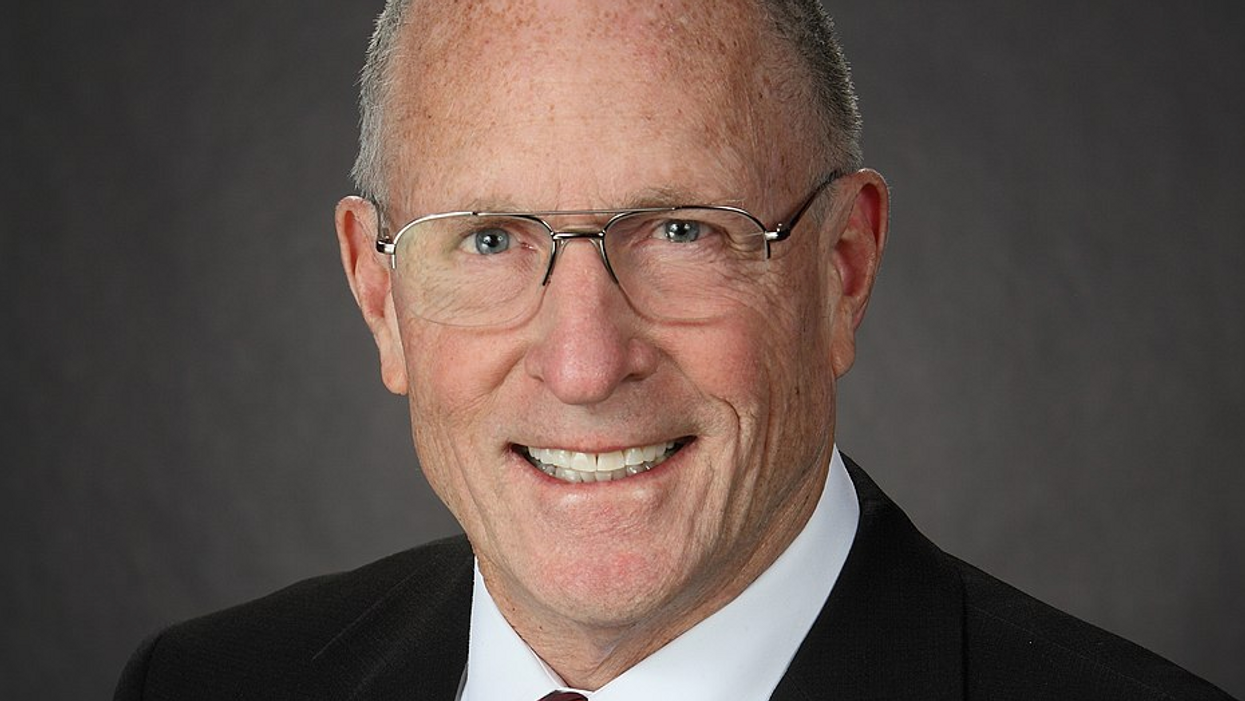 Image via Wikimedia Commons.
Shawn Mulcahy
and
The Texas Tribune
May 17, 2021

"Texas GOP state senator urged use of unproven hydroxychloroquine treatment for COVID-19. Now he's spreading doubt about vaccines." was first published by The Texas Tribune, a nonprofit, nonpartisan media organization that informs Texans — and engages with them — about public policy, politics, government and statewide issues.

State Sen. Bob Hall is not a doctor.

The Edgewood Republican graduated from The Citadel with a degree in electrical engineering and, after a successful career in the U.S. Air Force, started an aerospace and defense consulting business.

But a lack of medical training hasn't stopped Hall from promoting misleading — and at times outright false — information about the coronavirus pandemic. Early in the pandemic, he advocated for treating COVID-19 patients with a drug used to treat malaria, even though there was little evidence it worked. Now, he's promoting skepticism about the coronavirus vaccines, despite widespread scientific consensus that they greatly reduce the risk of serious illness or death from COVID-19.

Earlier this month, a Texas Senate committee considered a proposal from Hall that would ban any entity — public or private — from requiring their employees receive the COVID-19 vaccine and would prohibit “discrimination" based on a person's vaccination status.

Overwhelming evidence suggests the COVID-19 vaccines are safe and effective. The federal government sets strict safety standards for vaccines and each of the three authorized versions have been tested on tens of thousands of people. In clinical trials, the Pfizer vaccine proved 95% effective against the virus and was near perfect at preventing serious illness or death. Mild side effects from the shot are common, but severe adverse reactions are extremely rare, studies show.

Hall framed his measure as a protection of personal liberties. Businesses, he argued, should not have the power to force employees to undergo an “irreversible medical procedure." But in a period of sagging vaccination rates — particularly among staunch conservatives like Hall — the senator and his invited guests used their platform to promulgate debunked anti-vaccine conspiracies and push claims that have largely been eschewed by the medical community.

Hall is among the most conservative members of a Texas Senate known for its willingness to embrace right-wing issues. His wing of the party has proven a particular challenge for public health leaders pushing to get people in the state vaccinated.

Only about a third of Texans are fully vaccinated. Despite ample supply, the vaccination rate in recent weeks has continued to slip. And medical experts now predict that it's unlikely the U.S. will reach herd immunity, in large part due to enduring hesitancy to take the vaccine. An April poll by the University of Texas at Austin and The Texas Tribune found that 36% of Texans said they were either reluctant to receive the vaccine or would refuse to get it — including almost half of the state's Republicans.

The core argument from Hall and other vaccine skeptics is that the COVID-19 shot is a hastily developed, “experimental" treatment. Three vaccine makers — Pfizer, Moderna and Johnson & Johnson — have been authorized to administer their vaccines in the U.S. To expedite the delivery to vulnerable people and slow the spread of infection, the drugs were approved through a process known as emergency use authorization. The manufacturers were still required to undergo many stages of research and testing before they could be put to use and will have to apply for full approval after the pandemic ends.

It's true that the vaccines from Pfizer and Moderna are the first to employ messenger RNA, or mRNA, for human use. The vaccines trick the body into producing a harmless piece of the COVID-19 virus, which generates an immune response. But the technology has been under development for more than three decades.

It was one in a series of dubious medical claims raised during the hearing. One doctor testified that immunity from the injection is less powerful than “natural immunity" granted from God, while Hall characterized one person who spoke during public testimony as “almost a vegetable as a result of the vaccine."

Edwards, Hall and others appearing before the committee cited what appeared to be a startling statistic: More than 4,000 people across the nation have died after receiving the injection. It's a real number that comes from the Vaccine Adverse Event Reporting System, a federal database run by the Centers for Disease Control and Prevention and the Food and Drug Administration.

But unlike most government data, which undergoes strict quality checks before it's released to the public, anyone can self-report adverse health effects to VAERS and the information is not verified before it appears in the database. The federal government warns users that reports alone cannot be used to determine whether a vaccine caused or contributed to health complications or death. More than 150 million people in the U.S. have received at least one dose of the vaccine. With such widespread use, it's expected that some would die for unrelated reasons after taking the vaccine. Four thousand deaths would represent less than 0.00003% of people who have received at least one dose.

Hall also pressed witnesses on another debunked claim: Manufacturers Pfizer and Moderna skipped animal trials because the animals died after receiving the vaccine. The FDA required drug makers to test their products on animals and both Pfizer and Moderna publicly announced their results, though they received approval to simultaneously conduct animal trials and the first phase of human trials.

“I think that's important to understand there that what we're talking about is the American people are now the guinea pigs," Hall falsely said. “This is the test program that's going on."

Yet while Hall calls a vaccine that's been authorized by federal health authorities experimental, he previously promoted a controversial treatment even after its use was suspended because it offered no significant benefits and could lead to serious health complications.

In August, Hall organized a town hall to combat “misinformation" about the anti-malarial drug hydroxychloroquine, an unproven COVID-19 treatment touted by former President Donald Trump. The drug was authorized in April 2020 for use under the same emergency procedure as the COVID-19 vaccines. But the FDA in July 2020 yanked its authorization after a large clinical trial found hydroxychloroquine had “no benefit for decreasing the likelihood of death or speeding recovery" and could lead to dangerous health complications, such as heart problems, blood disorders and kidney failure.

Among the medical personnel invited by Hall were a dentist from Tyler and Stella Immanuel, a Cameroonian doctor who rose to popularity after Trump shared a video in which she praised the benefits of hydroxychloroquine and questioned the efficacy of masks. Immanuel has also alleged that alien DNA is used in medical treatments and that certain gynecological problems are caused by people having sex in their dreams with witches and aliens.

The government's job “is to protect the liberty and lives of people," Hall said at the time.

“We are trampling their liberties and we are not protecting their lives, because had we [have] been using hydroxychloroquine and some of the other drugs available … like we were in the beginning, we would not have the deaths in Texas that we have," he added, without evidence.

Disclosure: Effectiv and University of Texas at Austin have been financial supporters of The Texas Tribune, a nonprofit, nonpartisan news organization that is funded in part by donations from members, foundations and corporate sponsors. Financial supporters play no role in the Tribune's journalism. Find a complete list of them here.

This article originally appeared in The Texas Tribune at https://www.texastribune.org/2021/05/17/texas-bob-hall-covid-19-vaccine/.