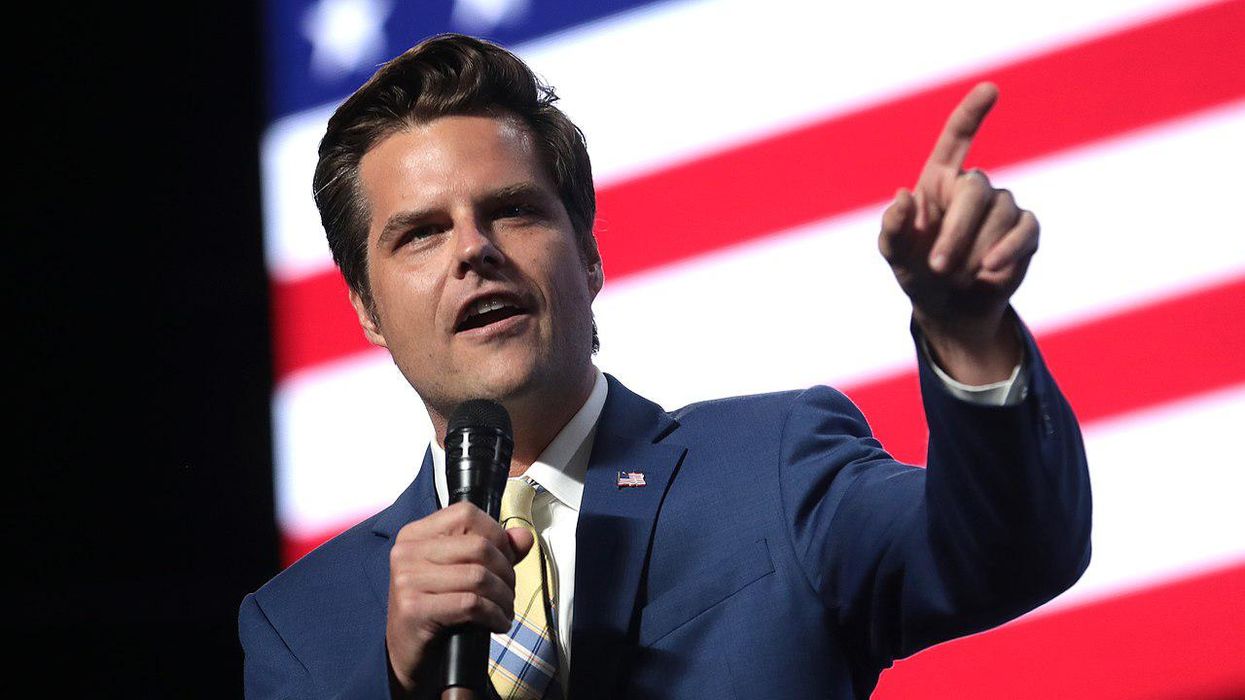 Rep. Matt Gaetz of Florida speaking with supporters at an "Address to Young Americans" event, featuring President Donald Trump and hosted by Students for Trump and Turning Point Action at Dream City Church in Phoenix, Arizona in 2020, Gage Skidmore
Alex Henderson
May 25, 2021

When Gov. Ron DeSantis won Florida's 2018 gubernatorial race — narrowly defeating the Democratic nominee, former Tallahassee Mayor Andrew Gillum — one of his most visible allies was Rep. Matt Gaetz, a fellow far-right Republican who, like DeSantis, was a devoted Donald Trump loyalist. That Gaetz/DeSantis alliance is the focus of an article by Politico's Matt Dixon, who stresses that Gaetz has had a major influence on Florida's governor.

In his article, published May 24, Dixon explains, "Before federal investigators were looking into Gaetz in an ongoing sex scandal, he was a top campaign adviser to DeSantis, who he met while both served in Congress. DeSantis, at the time, was a little-known GOP congressman in 2018 and needed help navigating Florida's political landscape as he weighed whether to run for governor. Gaetz, 39, had deep connections to Florida's political class because of his father, Don Gaetz, a powerful former state senator."

According to Dixon, "more than half a dozen former DeSantis campaign advisers and early administration staffers" interviewed by Politico "say Gaetz had huge influence over DeSantis." But with DeSantis running for reelection in 2022 and Gaetz caught up in a "sex scandal" and a criminal investigation, Dixon reports, the Florida governor "has all-but turned his back on Gaetz."

Although Gaetz hasn't been charged with anything, the U.S. Department of Justice is investigating allegations that he was sexually involved with a 17-year-old girl — an allegation the congressman has vehemently denied. And Gaetz's long-time ally, former Seminole County tax collector Joel Greenberg, has pled guilty to multiple federal crimes, including sex trafficking of a minor.

DeSantis has recently refused to comment on the investigation of Gaetz. But Dixon reports that in 2018, Gaetz was "an integral part of DeSantis' gubernatorial campaign, including playing DeSantis' primary opponent during a debate prep session."

A Politico source described by Dixon as a "former DeSantis adviser" told Politico, "Man, I can't tell you how much, by the end of the election, he was the campaign. By the time we were in heavy general election mode, DeSantis was not doing anything without Gaetz being in on it."

A former DeSantis aide recalled the time Gaetz brought Greenberg to DeSantis' campaign office in 2018, telling Politico, "I obviously knew who Matt was, but I was like, 'Who the fuck is this guy?' It was the first time I saw him. They were in, like, shorts and sunglasses, and just came in trying to give us advice and tell us what to do. It was very bizarre for like an hour or so."

Many of the people quoted in Dixon's article were obviously interviewed on condition of anonymity. One of them, described by Dixon as an "early DeSantis Administration adviser," told Politico, "When they started the transition, the governor let Gaetz appoint the transition team. He picked the transition chairs…. They were all picked by Gaetz. And he worked hard, and to some degree of success, putting all his people he wanted in the Administration."