The parentification trap: How evangelical daughters like the Duggar girls become mothers in training 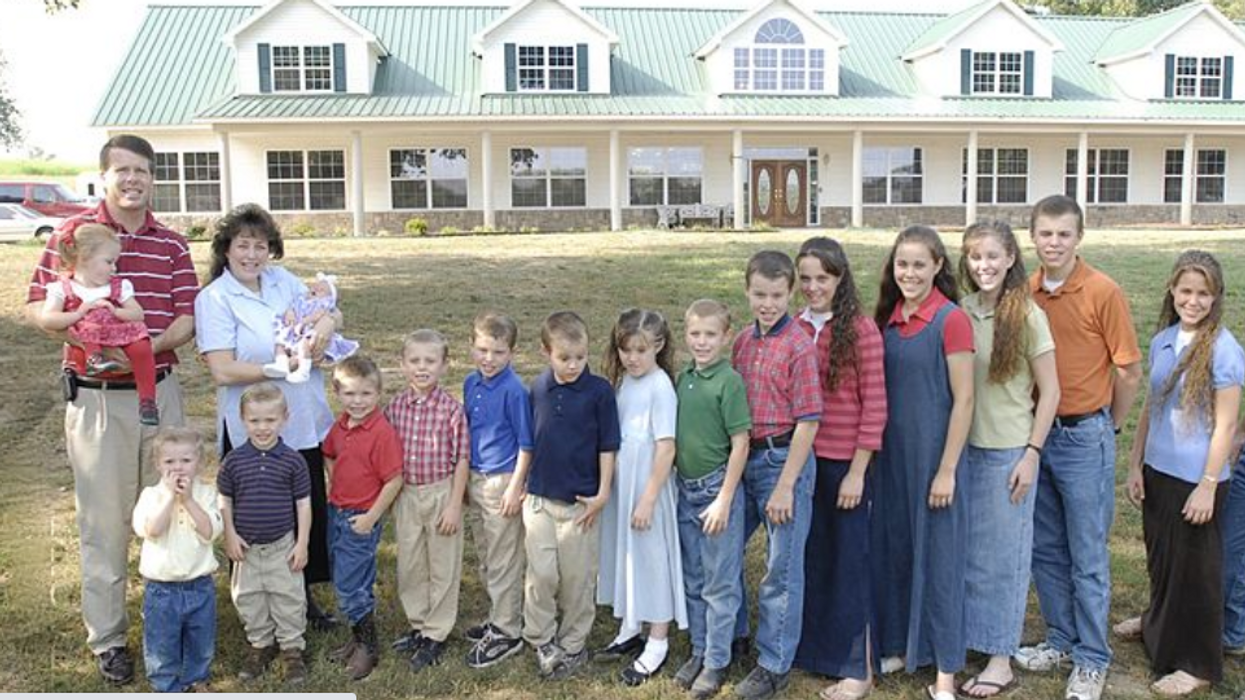 By the time she was 13 years old, Ruth's daily schedule was almost identical to that of her mother's.

Both would wake up at 5:30 a.m. and spend an hour picking away at the seemingly endless list of chores associated with running what would eventually become a 12-person household: laundering and mending the mountain of hand-me-down clothes that occupied a corner of the kitchen, loading up three slow cookers with ingredients for dinner, cleaning the bathrooms before they'd be in use, on-and-off, all day.

If Ruth's mom was pregnant — which is how Ruth, who asked that only her first name be used, primarily remembers her — then the bulk of the work would fall to Ruth. She would be the one to wake her younger siblings and prepare them breakfast before walking the ones who were old enough to a church-run elementary school nearby.

"I didn't really have the option to pursue school outside of homeschooling, though, because my mom needed me to help with the much younger kiddos," Ruth told me in a phone call.

"I remember complaining about it for the first time when I was probably 11 and I'll never forget what she told me," she continued. "She said, 'Ruth, this is what God made you for.'"

Ruth, who is now 31 and lives outside of Atlanta, describes her family's religion as a "slippery slope that led to Quiverfull."

Her father was raised in a sleepy independent Baptist church in rural Georgia in the 1970s.

"But he always had a flair for the dramatic," Ruth said. "Dad liked the Bible stories about the 'big miracles.' Jesus feeding the thousands, Moses parting the Red Sea, that kind of thing. So, when he visited a Pentecostal tent revival, where they were handling snakes and speaking in tongues, I think that was it for him."

Her father, she says, was deeply compelled by the idea of demonstrating one's faith in God through outsized public displays. He gravitated towards scripture that encouraged followers of Christ to "be in the world, but not of the world." After traveling through the South for a few years as a self-made evangelist who did odd jobs on the side, he married and saw an opportunity to follow God to the extreme by having as many children as possible to serve Christ.

When asked about his decision, Ruth remembers her father would recite a Psalm from the King James Version of the Old Testament: "As arrows are in the hand of a mighty man; so are children of the youth. Happy is the man that hath his quiver full of them."

It's the same verse that other adherents to Quiverfull ideology — as well as the scandal-ridden Duggar family of TLC's "19 Kids and Counting," who have previously said they do not identify as part of the Quiverfull movement — point to as a theological backing for their movement. They interpret it as a command to reproduce often without any birth control or family planning.

"I grew up around at least a half dozen other Quiverfull families, maybe more," Ruth said. "And the parents, the fathers mostly, would talk about what a blessing children are, but I'll tell you, they didn't care about the female arrows in their quiver."

Even in many more mainstream evangelical congregations, girls are trained up to be wives and mothers.

Before I hit puberty, youth leaders at my parents' Baptist church would talk to us about the virtues inherent to "Proverbs 31 wives," which was based on a description of the ideal Godly woman that was purportedly written by King Solomon — who, if you'll remember, also supposedly had 700 wives and 300 concubines. (The irony is overwhelming in retrospect).

It was made clear that we were to be pure and virtuous "help meets" for our future husbands, someone to assist them in their role as spiritual leader of the household.

In Quiverfull families, however, the eldest daughters often take on the role of "little mothers," as the blog "Quivering Daughters" aptly put it, or as additional help meets.

While it's inevitable in any family with multiple children that the older siblings will have some responsibilities that younger siblings do not, in families that reach the double-digits in size and where Biblical patriarchy is preached, the burden falls heavily to the girls, which can have long-lasting psychological effects.

In 2017, The Atlantic published an article titled "When Kids Have to Act Like Parents, It Affects Them for Life," which dove into the concept of "destructive parentification," a form of emotional abuse or neglect where a child becomes the caregiver to their parent or sibling. Researchers are increasingly finding that in addition to upending a child's development, this role reversal can leave deep emotional scars well into adulthood.

Lisa M. Hooper, a University of Louisville professor who studies parentification, told the publication that many children who were made to parent their siblings now "experience severe anxiety, depression, and psychological distress. Others report succumbing to eating disorders and substance abuse."

"The symptoms look similar to some extent, from cradle to grave," Hooper told the Atlantic.

Much of the research that has been done on destructive parentification focused primarily on children whose parents were neglectful or unavailable because of alcoholism or addiction. But a survey of writings from women who were raised as Quiverfull daughters shows similar evidence of feeling anxiously unmoored.

Hillary McFarland, the author of "Quivering Daughters: Hope and Healing for the Daughters of Patriarchy," shared an excerpt of an old diary entry on her blog in 2009. She'd written it when she was 14.

"I'm having a bad day today," she wrote. "I'm just so tired! I'm so tired of working—there is always something that needs to be done and dad is never satisfied. I'm tired of being overwhelmed with everything. I'm tired of washing dishes every night, I wish that the house would stay clean for 2-3 days—the kids are always cutting up paper, getting out toys, splashing water all over the bathroom sink, getting mud and sand all over the bathroom floor."

She continued: "I'm tired of getting mad at my brothers and sisters, I wish I were perfect. I absolutely abhor the thought that every idle word will be judged . . . lately I have been doing some self-analyzing, or examining—I'm trash . . . I'm sick of disappointing God."

That concept of disappointing God runs heavily through Quiverfull families. In many cases, there aren't enough hours in a day or resources, emotional and financial, to go around and it's burdensome; but as Vyckie Garrison, a former Quiverfull wife told Salon in an interview last week, many mothers approach it as a spiritual challenge or a backyard mission field.

"The [fellow Quiverfull] women would tell me, 'Missionaries risk their lives every day and they do it because it's their calling,'" she said. "'When they get to heaven, they'll get their martyr's crown.' There's a huge martyr's mentality."

Over the last decade, the concept of parentification has gained enough mainstream traction that former viewers of the now-cancelled TLC show "19 Kids and Counting" have started to question whether the network's framing of the family as an oversized "Waltons" was shielding something more sinister, especially as the family's eldest son, Josh, has fallen into scandal after scandal, and has now been arrested for the possession of child pornography.

Throughout the years, there have been numerous web forums and subreddits dedicated to going back and watching old footage of the show while advocating for the "freedom" of some of the Duggar family's daughters. Former Quiverfull daughters are now speaking out as well while the family is under increased scrutiny.

"One time, my family attended a talk by the Duggar parents and my baby brother was crying, so I had to take him out to the hall where all the other older daughters were handling their parents' babies, including Jessa and we all shared this exhausted look that I remember to this day," one Twitter user wrote.

She continued: "Looking back now, it's so f**king funny that you had all these families who worshipped the Duggars and their way of life and all these daughters were in the hall with their parents' babies just like… f**k this, I'm tired."

Ruth felt this acutely while growing up. Most nights, she would only get five hours of sleep — between staying up late to finish chores, waking throughout the night to feed or comfort one of the babies, and getting up early — and was always exhausted.

"Since I was so tired, I would lash out at my parents and siblings and then I would get reprimanded," she said. "While I was being punished, I would angrily pray to God, 'Why are you doing this to me? I'm just trying to serve you.'"

Ruth ended up running away when she was 17 after watching "Now, Voyager," a 1942 film starring Bette Davis. Her parents were strict about what she and her siblings watched, but most "black and white classics" were deemed acceptable.

The film takes its name from the Walt Whitman poem "The Untold Want," which says, "The untold want, by life and land ne'er granted, Now, Voyager, sail thou forth, to seek and find."

"In it, Bette Davis' character lives with a controlling mother who always puts her down and then she has this mental break," Ruth said. "She ends up moving away, getting healthy, becoming fashionable and then she comes back. I thought that I could do that, too. All I really wanted was a break."

Her break was a little less glamorous than Davis'. She got a job at a local convenience store and split rent with an elderly coworker. At night, she studied for her GED and on weekends, she'd eat cereal in her pajamas and watch television — trashy reality shows and Animal Planet, mostly.

It was the first time in Ruth's life that she didn't have a schedule; it was also the first time that she really watched the Duggars on television. "I watched this sanitized version of what Quiverfull life was like and I was hurt, I was disgusted," she said. "I can't even look at them to this day without getting angry."

Ruth said she hopes that the Duggars' crumbling facade in the face of Josh's scandals will make the public question other aspects of the family life they modeled for years on TV.