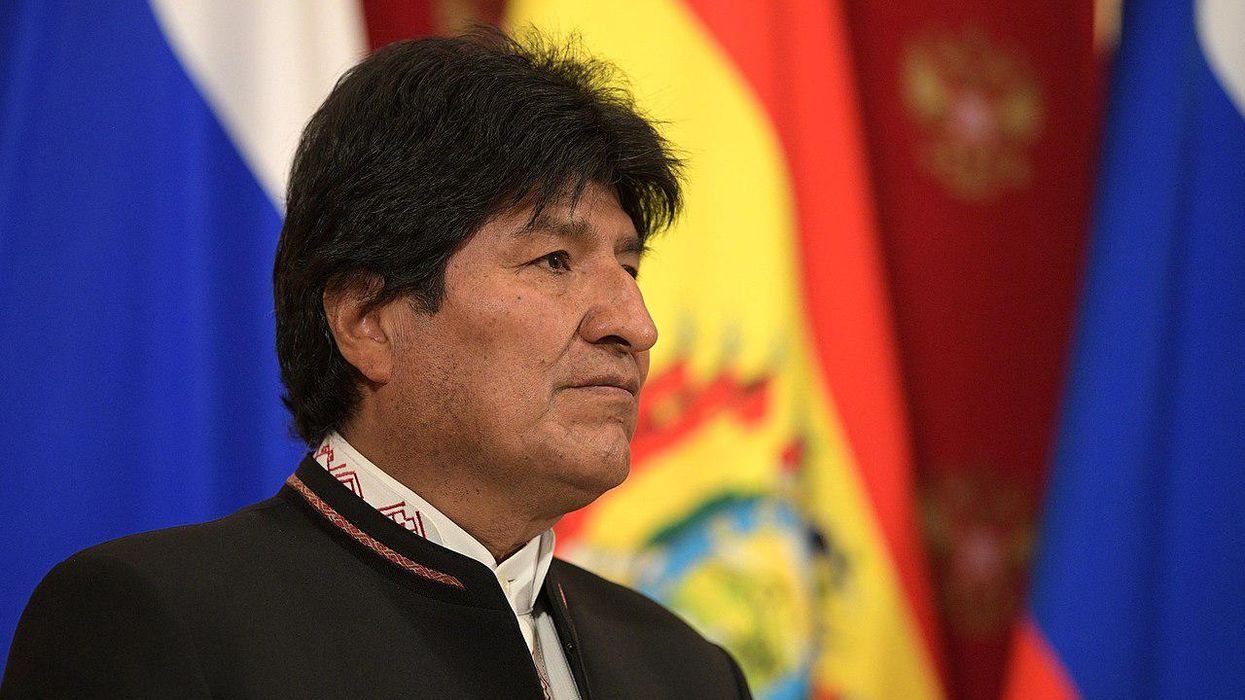 Evo Morales' 13 years as president of Bolivia came to an end when, in 2019, he was removed from power via a coup. According to reporters Ken Klippenstein and Ryan Grim, e-mails that have been obtained by The Intercept and were sent during former President Donald Trump's final months in office "add new evidence to support Bolivian allegations that the United States was implicated in its 2019 coup."

"The e-mails reveal the Justice Department's involvement in the Bolivian coup regime's criminal investigation into alleged voter fraud, which has not previously been reported," Klippenstein and Grim explain. "The inquiry targeted a pair of respected MIT researchers about their work for the Center for Economic and Policy Research, in which they broadly refuted suspicions that Bolivia's socialist party had rigged the election."

The reporters add, "The short-lived coup regime reached power following a clear script: In the weeks leading up to the Bolivian presidential election in October 2019, the opposition pumped endless propaganda through social media and television networks, warning that incumbent President Evo Morales would exploit widespread fraud to win reelection."

Morales first came to power in the mid-2000s following the Cochabamba Water Rebellion. Cochabamba, Bolivia's third largest city, was rocked by huge demonstrations when its water system was privatized and many Bolivians could no longer afford their water bills — and Morales was a major supporter of the revolt. When Morales was elected in 2005 and sworn into office in early 2006, Bolivia went from having a conservative president to having a socialist president.

In 2019, Morales sought a fourth term. But Klippenstein and Grim note that he "faced intense opposition, often framed in explicitly racist terms, from a Frankenstein coalition of right-wing Bolivians of European descent and supporters of former President Carlos Mesa, once a member of Bolivia's left revolutionary party who had become hostile to Morales' social democratic government."

After the election, Klippenstein and Grim note, Morales "had won by 10.6 points." But his opponents claimed election fraud.

"In fact, it would be statisticians who repudiated the coup," the reporters explain. "Researchers at MIT, commissioned by the Center for Economic and Policy Research, took a closer look at the data and evidence behind the allegations and concluded what many other independent observers had already found: The fraud claims were bogus, according to a statistical analysis conducted by Jack R. Williams and John Curiel of MIT's Election Data and Science Lab. The fallout from the MIT researchers' analysis, which was published by the Washington Post in February 2020, was considerable. In a stunning reversal, the New York Times published an article on the findings, saying that it 'cast doubt on Bolivian election fraud.'"

The MIT researchers were contacted by the U.S. Department of Justice during Trump's final months in office.

According to Klippenstein and Grim, "Trial attorney Angela George identified herself as an attorney at the Justice Department's Office of International Affairs, or OIA, and said she had 'received a formal request from Paraguay' for assistance in an ongoing criminal investigation. Curiel told her she had the wrong researcher, as he had not worked on any Paraguayan election study, and she told him that Bolivia was the one she had meant."

Morales fled Bolivia following the coup but has since returned to the South American country from exile.