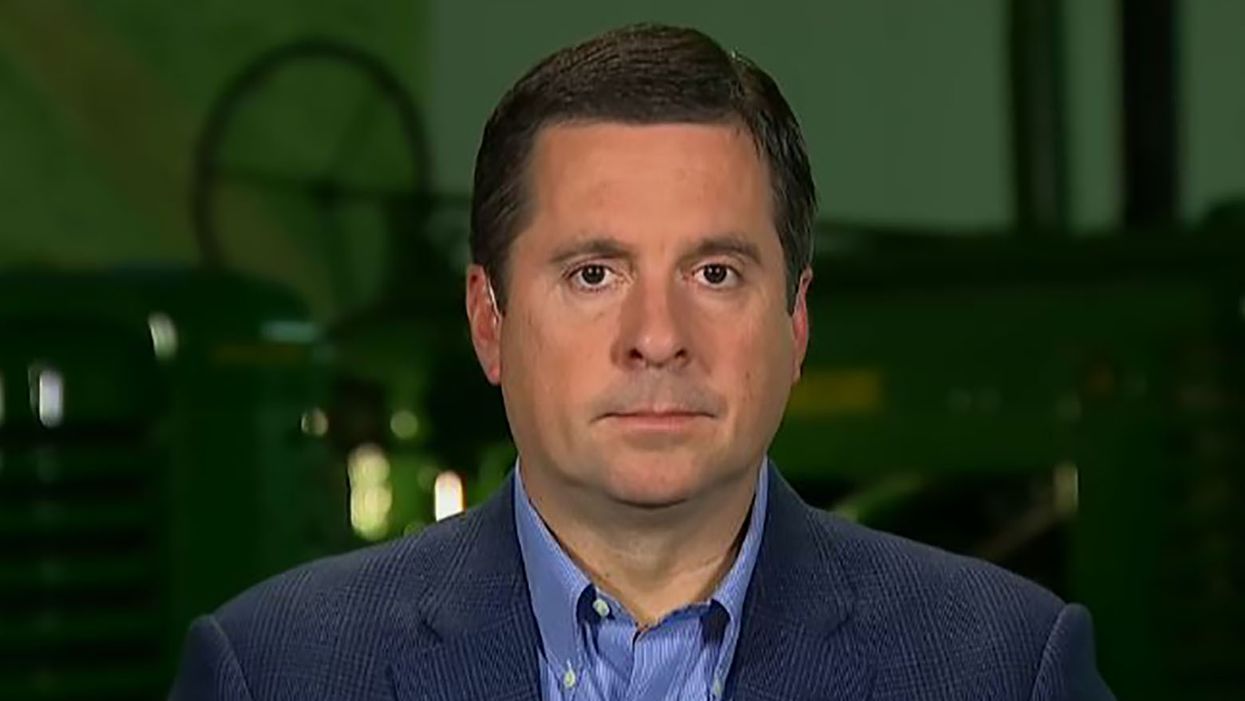 The saga of Devin Nunes' thin-skinned attempts to not just shut down a Twitter account belonging to an imaginary bovine, but sue the human being behind that account, are legendary. And hilarious. When the congressman most famous for leaping from an Uber to skulk around the White House grounds decided to sue a pair of parody accounts—and Twitter, and everyone else who was standing around laughing at his massive dufitude—Fox News called it "a major lawsuit." For weeks, Fox and other outlets kept viewers up to date on the latest developments in the case of the congressman versus the cow … a case in which Nunes literally sued over being called "uddely worthless" and a post saying that his "boots are full of manure."

Those are only a subset in a long line of silly lawsuits filed, and lost, by Devin Nunes. But as Nunes was making himself the court jester of frivolous suits, he was also raking in cash. Each one of these lawsuits was trumpeted in right-wing media as another example of his willingness to fight the dreaded "deep state" and push back against "liberal bias." That coverage helped Nunes rake in over $11 million in campaign cash.

As it turns out, it wasn't just Fox News helping Nunes make a mockery of the courts. Because Bill Barr and the Department of Justice became fully—and almost certainly illegally—involved in Nunes' attempt to lasso a nonexistent cow.

Nunes' original lawsuit against Twitter had two parts. One claim was that the media platform was engaged in "shadow banning," a nonexistent process in which right-wing accounts become invisible without being actually banned. For that, Nunes asked for $250 million. The second claim was that mean tweets from the parody accounts "Devin Nunes' Cow" and "Devin Nunes' Mom" consisted of defamation that was intended to derail Nunes' House campaign and interfere with his vital work in investigating the Russia investigation. For this reason, he actually sued the fake cow and the fake mom for $350 million and demanded that Twitter "unmask" the people behind the accounts.

As The Washington Post reports, when Nunes' lawsuits against Twitter failed to gain the name behind the cow account, someone else pitched in: then-Attorney General William Barr. That included using the Department of Justice (DOJ) to issue a grand jury subpoena demanding the identity behind the account.

Twitter, fortunately, refused to obey and filed a motion to quash the subpoena, saying, "Congressman Nunes had previously and unsuccessfully attempted, in several ways, to obtain information about his critics." With courts repeatedly ruling against Nunes, the DOJ request looked to Twitter like a backdoor attempt to route around those legal rulings and extract the information. Because it was.

When Twitter tried to get an explanation from the DOJ as to why they were asking for this information—information only pertinent to an individual defamation suit—the DOJ responded that the information was "part of a criminal investigation," and hinted that the owner of the Devin Nunes' Cow account had threatened to injure someone. However, they would not provide Twitter with any proof of such a threat.

In essence—and in fact—the DOJ took on the role of personal attorneys to Devin Nunes. This subpoena, filed in the wake of Trump's defeat at the poles, represented nothing less than an attempt to turn the United States government into a battering ram that Trump's favorite congressman could use to batter down multiple court rulings so that he could personally harass and sue an individual.

In trying to gain this information from Twitter, representatives of the DOJ not only operated far outside the agency's rightful area, but made false claims about the owner of the account and falsely represented to Twitter that crimes had been committed.

Twitter's response to the subpoena asks the presiding judge to "engage in a searching analysis of the government's bases for issuing the subpoena in order to determine whether the subpoena violates the First Amendment and should be quashed." But the questions go beyond whether the DOJ has the right to demand the name of someone behind a parody account. The issues here are:

The Devin Nunes' Cow account is funny. Nunes' lawsuit against that count was both ridiculous and ugly. But this … this isn't funny. At the very least, the court should also be conducting a "searching analysis" of whether anyone involved in this deserves to be practicing law anywhere. Ever again.

The date on the subpoena was Nov. 24. That's one month before Bill Barr departed from the DOJ. That's a very good place to start that analysis.

Update: Just noting that Twitter's court document specifically names assistant state's attorney Michael Friedman as the person who represented the DOJ subpoena as being part of a criminal case.