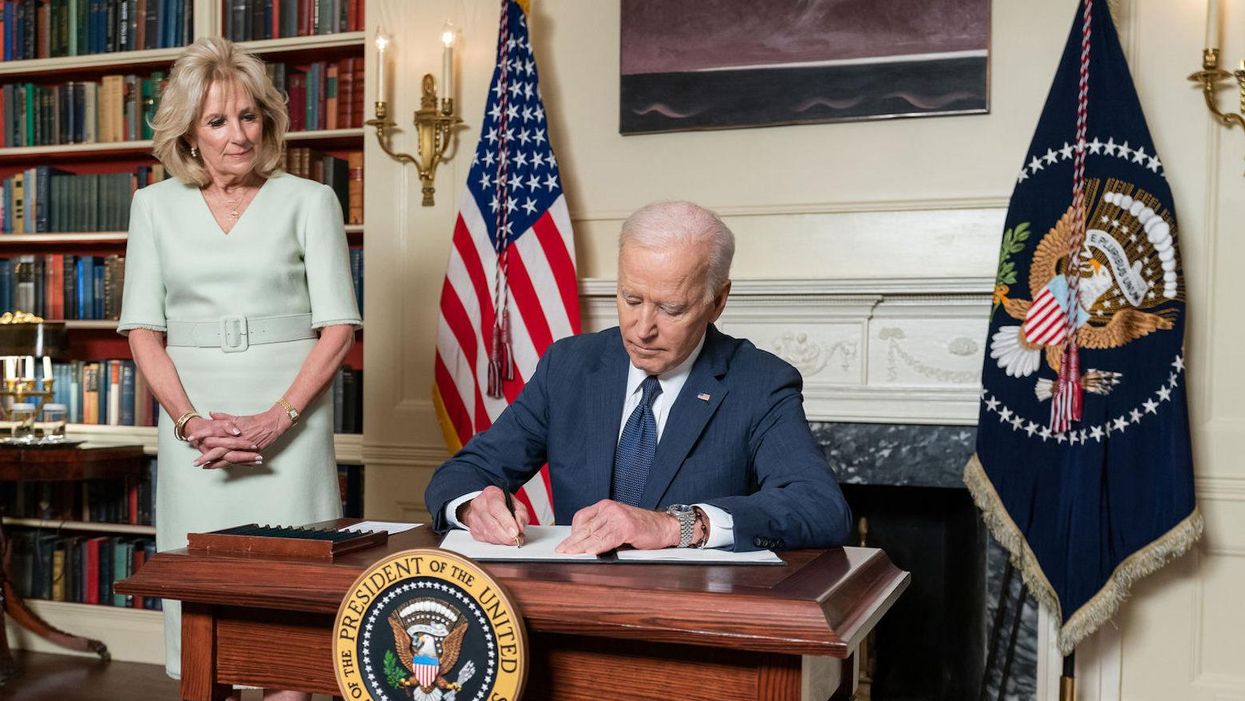 President Joe Biden, joined by First Lady Jill Biden, signs the Month of the Military Child Proclamation Wednesday, March 31, 2021, in the Library of the White House.

During his many years in politics, President Joe Biden has had a reputation for being a centrist — first during his decades in the U.S. Senate, then as vice president under President Barack Obama for eight years. But during his four months as president, Biden has focused on big legislation — stressing that the current challenges the U.S. faces call for aggressive action. Biden discussed, among other things, his reasons for "going big" during an interview with New York Times columnist David Brooks.

Brooks writes, "What happened to Joe Biden? Many people thought he was a moderate incrementalist, but now, he's promoting whopping big legislative packages that make many on the progressive left extremely happy. I asked him that when I spoke on the phone with him this week. The answer seems to be — it's complicated."

The 78-year-old Biden has long had a liberal streak and a conservative streak, and in the past, that conservative streak sometimes frustrated the more progressive members of his party. The late Republican Sen. John McCain of Arizona, a self-described "Goldwater conservative," viewed Biden as the type of Democrat who could meet Republicans halfway. And McCain's widow, Cindy McCain, endorsed Biden over former President Donald Trump in 2020.

Biden told Brooks that given the challenges the U.S. is facing, bold action is desperately needed.

"We're kind of at a place where the rest of the world is beginning to look to China," Biden explained. "The most devastating comment made after I was elected — it wasn't so much about me — but it was by the Irish taoiseach (prime minister) saying that 'well, America can't lead. They can't even get their arms around COVID.'"

During the interview, Brooks asked Biden to cite the things that shaped his political belief system in the past — and he cited his father's financial troubles as one of them.

Biden recalled, "After the (Second World) War, he was doing fairly well, and that's when he lost everything…. I watched my dad get the hell kicked out of him in terms of his pride."

During the interview, Biden pushed back against the idea that he has taken a hard-left turn, telling Brooks, "The progressives don't like me because I'm not prepared to take on what I would say and they would say is a socialist agenda."

Nonetheless, the president believes that if the U.S. doesn't "go big" in 2021, its position in the world will seriously decline.

"The risk is not trying to go big," Biden told Brooks. "If we stay small, I don't know how we change our international status and competitive capacity."