This week, President Joe Biden released a proposed budget for fiscal year 2022. Parts of that budget include proposals already working their way through Congress—or smashed up against Republican opposition in the Senate—such as the infrastructure portion of the American Jobs Plan, or the energy proposals that recently emerged from committee as the Clean Energy for America Act. The $6B proposal includes programs to address homelessness, historic investments in education at all levels, along with a whole slew of programs to support children and families.

The $6 trillion proposal also includes $24.8 billion for NASA which, historically, is a long way from the amount of the budget dedicated to space back in the 1960s and '70s. However, it does represent a $1.5 billion boost over 2021. It also features a record $7.93 billion for science programs, including boosting the planetary science program from $500 million to $3.2 billion. Which means, of course, that there are cuts in other areas.

For more than two decades, NASA has been subject to wild swings in programs. Return to the moon. Mars. No, the moon. In the process, a whole generation of heavy lift vehicles disappeared in the midst of wild swings in funding and changes of direction. At present, the agency is aimed at heading back to the moon this decade, with both a space station that will orbit the moon rather than Earth, and a recently rewarded contract for a giant lunar lander. The Space Launch System, years behind schedule, just finished a successful test, and the first rocket is on its way to Kennedy for a launch in coming months. Plans are on the table for both future manned missions, some truly challenging voyages around the solar system, and still more instruments that could study planets around distant stars.

With a new administration coming to town, NASA is looking—again—at the potential of shifting goals that could potentially invalidate years of work, and redirect the agency at new targets which could last only until the next team arrives. So what does Biden's $24.8 billion budget really buy?

One thing that's been restored to the NASA budget that was cut under Donald Trump: Earth science. It may seem contradictory, but the best system for studying what's going on down here (including the climate) often requires getting new instruments into orbit. Under Trump, every instrument that might even potentially provide a clue about melting polar ice, or rising CO2, went on the chopping block. But the first Biden budget for NASA restores $250 million aimed at continuing a program known as the Earth System Observatory. The expansion of the program was announced a week ago, and should lead up to an additional four launches between now and 2030.

That large expansion of the planetary sciences program includes another program that's really more about what could (potentially, but hopefully not) be going on back on Earth. That's where the Near Earth Object Surveyor mission comes in. This would launch a telescope designed not to look at the most distant objects in the universe, but to seek out the asteroids and comets that skim closest to Earth. This is part of NASA's aptly named "Earth Defense" program which, presumably, will also direct any real space lasers if all those recent UFO videos signal a hostile invasion.

When it comes to the space just above Earth, the budget for 2022 includes a large boost in funding for commercial development of low Earth orbit (LEO). The $101.1 million allocated here is an increase of almost 500% from the 2021 actual numbers. It includes continued support for both cargo and crew missions to the International Space Station, and additional funding that should help expand the presence of commercial launches to orbit. That could include more funds for the development of SpaceX's Starship and expanding the use of Sierra Nevada's Dream Chaser space plane. And, while NASA will continue to support ISS beyond it's original projected last-use data of 2025, it will also provide funds that could help private companies building their own next-generation space stations (something that has picked up more interest in the face of China's expansive plans for their own station). Actual funds to the ISS are essentially flat.

There is one Earth-related cancellation. That's the Stratospheric Observatory for Infrared Astronomy (SOFIA) program. This isn't a rocket, but an instrument mounted in a Boeing 747 that scans the atmosphere for water vapor data that's used in climate modeling. NASA has felt for some time that they get better information from other sources and has been trying to cancel SOFIA for the last seven years … only Congress keeps putting the money back.

Right now, the Perseverance rover is not just taking pictures as it drives across the surface of the red planet, it's also collecting rock samples in a way that protects them from potential contamination and readies them for a possible return to Earth. Only the Perseverance mission included no way to get those Mars rocks back to Earth. The 2022 budget includes over $650 million for the follow-on Mars Sample Return Mission that would drop a unique vehicle onto the Martian surface. This system would be designed to collect those samples already drilled out and packaged by Perseverance and blast them back to Earth with something that looks very much like space-bound artillery. 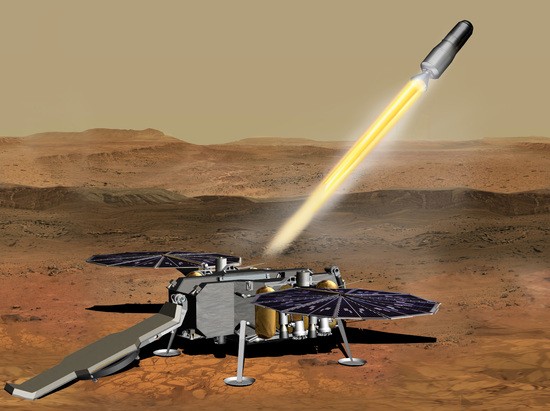 The Mars Ascent Vehicle is just one part of the Mars Sample Return mission.

Maybe the biggest sigh of relief for NASA watchers may be that when it comes to NASA's current plans for the moon and beyond, the biggest message sent by Biden's proposed budget is simply … carry on. The overall exploration budget goes up from $6.5 billion in 2021, to $6.8 billion in 2022, but the biggest news is that nothing major appears to have been shifted around. SLS is still on. The plan to fly an Orion capsule around the moon in the next year is still there. And the whole Artemis program to return astronauts to the moon by 2024 remains in place … even though everyone knows that date is going to slip. Then slip again.

One thing that NASA-watchers wanted to see was whether NASA's recent selection of SpaceX's enormous lunar version of Starship survived into the coming budget. It did. The biggest reason for this is the same reason that NASA made the selection in the first place: SpaceX radically undercut the proposed price of every competing lunar lander proposal, while promising much more capacity. 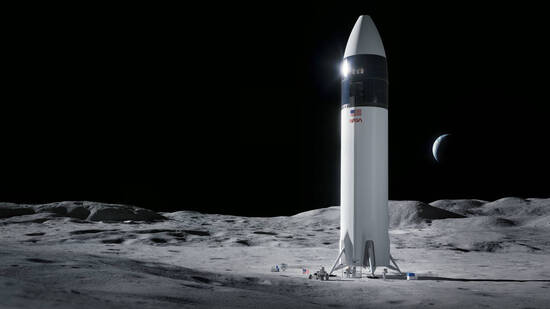 Proposed next generation lunar lander created by SpaceX. There are people in this picture. Look closely.

Right now the SpaceX contract to build the lander has been suspended because a team involving Jeff Bezos' Blue Origin (and a long list of traditional NASA subcontractors) has launched a suit contesting the decision to award the contract to SpaceX. If they win their suit, Congress will have to lay out more funds, because each of the competing proposals was far more costly.

Skeptics of NASA's whole SLS investment—now at least $2 billion and four years behind in development—have argued that the whole system should be cancelled. Just as the Commercial Crew program has seen astronauts return to the ISS at a fraction of the cost of developing a new NASA vehicle for that purpose, there has been considerable pressure to scrap SLS in favor of getting astronauts back to the moon on heavy lift vehicles, such as SpaceX's upcoming SuperHeavy/Starship, or Blue Origin's New Glenn. Plans have even been put forward for vehicles that might be launched using the existing Falcon Heavy or upcoming ULA Vulcan. But NASA has remained committed to SLS as America's ride to deep space, despite arguments that the fully-disposable rocket represents little advance over systems used 50 years ago.

That said, even those who oppose SLS are likely happy with Biden's proposed budget for what it doesn't do. It doesn't signal another enormous shift in priorities. That welcome signal of relative stability is something that everyone at Kennedy has to welcome … assuming any of this survives Congress.

Officially, NASA still hopes for a late 2021 launch of the first SLS system. Unofficially, don't be surprised if, after being delayed in Mississippi for extended testing, that launch slips into 2022.