The clock is ticking on Biden's 'bipartisan' infrastructure efforts 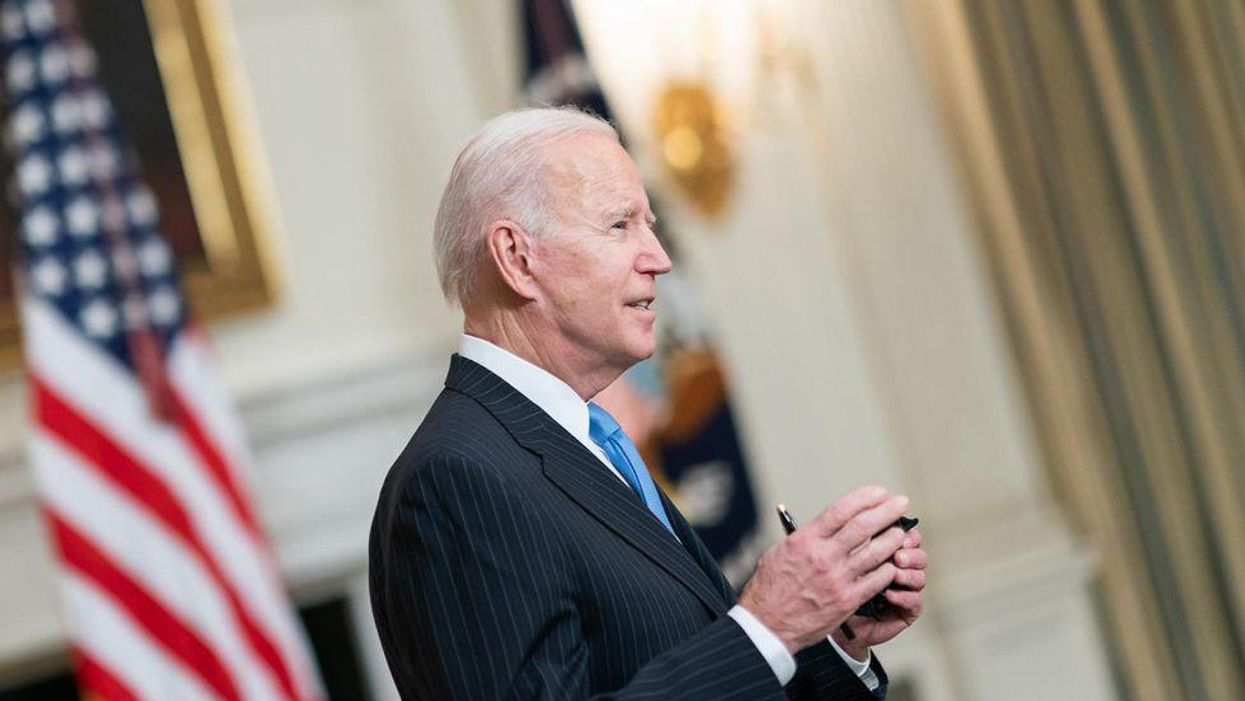 President Joe Biden talks to members of the press in the State Dining Room of the White House Tuesday, March 2, 2021, after delivering remarks during a COVID-19 announcement. (Official White House Photo by Adam Schultz)
Joan McCarter
and
Daily Kos
May 24, 2021

Despite the fact that Senate Republicans have now repeatedly shown up to supposed infrastructure negotiations with the White House with absolutely nothing new for weeks, President Joe Biden made a counteroffer last Friday, negotiating with himself as the only "countering" done was with his previous $2.3 trillion plan. The White House told Republicans they would cut $550 billion from that proposal, bringing the total down to $1.7 trillion. Republicans scoffed.

"This proposal exhibits a willingness to come down in size, giving on some areas that are important to the president—otherwise they wouldn't have been in the proposal—while also staying firm in areas that are most vital to rebuilding our infrastructure and industries of the future," White House press secretary Jen Psaki said at the press briefing on Friday.

A spokesperson for lead Republican negotiator Shelley Moore Capito responded "Based on today's meeting, the groups seem further apart after two meetings with White House staff than they were after one meeting with President Biden. Senate Republicans will further review the details in today's counteroffer and continue to engage in conversations with the administration." Sure they will.

Meanwhile, The New York Times goes to remarks from Sen. Susan Collins over the weekend, for commentary on the state of things, because they still believe she's "one of the Republicans most willing to cross party lines." Apparently the Times has not cottoned onto the favorite game of Mitch McConnell and Collins, where he sends her out to dangle the thread of bipartisanship long enough to fully poison the well, so she can come back later to express her dismay and concern and regrets over either having to oppose something or support it, safe in the knowledge that her vote will make no difference because McConnell has enough votes to kill it.

Anyway, Collins told ABC's This Week that "I think we're still pretty far apart, but this is the test. This will determine whether or not we can work together," and by "this" being the "test" she means how many more hundreds of billions Biden will shave off of his proposal. "I was glad that the president put a counteroffer on the table, but if you look closely at it, what he's proposing to do is move a lot of the spending to a bill that's already on the Senate floor."

Which is true—there's a "compete with China" bill in the Senate that has a good chance of passing, that would fund new research and development in scientific and technological innovation. Meanwhile, Senate Republicans want to steal from already-passed legislation, funding their version of infrastructure with money earmarked for COVID-19 relief and recovery that hasn't been spent yet.

The White House informed Senate Republicans, when making this "counteroffer," that the administration expects them to cough something up in return, like perhaps agreeing that money should be spent on something other than bolstering the fossil fuel industry with more roads and bridges. "We remain concerned that your proposal excludes entirely some investments that are key to our competitiveness and have garnered bipartisan support," administration officials wrote to the Republicans.

Speaking for Republicans, Sen. Roy Blunt said that the "biggest gap is not the money." He went on to describe the problem. "Our biggest gap is defining what infrastructure is, and if we get to a definition of infrastructure that the country would have always accepted, that becomes a much narrower space than it appears to be right now." Which is essentially tearing up that letter from administration officials asking the GOP to consider broadening their infrastructure horizons. In other words, here's where they are with Republicans right now, pithily summed up by Capitol Hill reporter Sahil Kapur:

Biden-GOP infrastructure disputes include: —How much money to spend —Whether repurposed spending counts —What to s… https://t.co/aQinFaDHZA
— Sahil Kapur (@Sahil Kapur) 1621880436.0

At least everyone seems to be in agreement that there's a metaphorical table at which negotiations would theoretically take place, and there are no arguments over what shape that table should be. But, yeah, they're still fighting over simple definitions of "infrastructure," that thing that on a physical and social level props the country up and keeps it functioning at some level. That level at the moment is not barely mediocre, where Republicans like it.

Another Capitol Hill reporter, NBC's Leigh Ann Caldwell, perhaps hit on the larger truth here in a bit on MSNBC Monday morning, in which she characterized the situation as "extremely stalled."

Her Democratic and Republican sources, Caldwell said, are telling her that the Biden White House is "engaging in these negotiations on infrastructure for an audience of one, and that is Sen. Joe Manchin," who has said "over and over again he doesn't want to go down the partisan path on infrastructure unless things don't work out with Republicans." That very well may be true.

Here's Sen. Bernie Sanders, the independent chair of the Budget Committee. He told the Times that the infrastructure bills—both the American Jobs Plan and the follow-up American Families Plan—will "probably" have to be done through budget reconciliation with Democratic votes alone. "We would like bipartisanship, but I don't think we have a seriousness on the part of the Republican leadership to address the major crises facing this country," Sanders said. "If they're not coming forward, we've got to go forward alone."

It's not just infrastructure, obviously. It's something as profoundly simple and crucial as the commission to investigate how Jan. 6 happened and what the government might do going forward to make sure that a violent mob doesn't descend on the Capitol to try to overthrow the Congress again, possibly killing some of them in the offing. If Republicans aren't willing to work with Democrats to save their own goddamned institution, they're not going to stretch to fix anything else.

Time is ticking down and urgent legislative needs are piling up, with a debt ceiling and a budget hanging out there along with everything else. Everything else includes passing election laws reforms to make sure that 2022 and 2024 aren't already fixed for Republicans by Republicans.