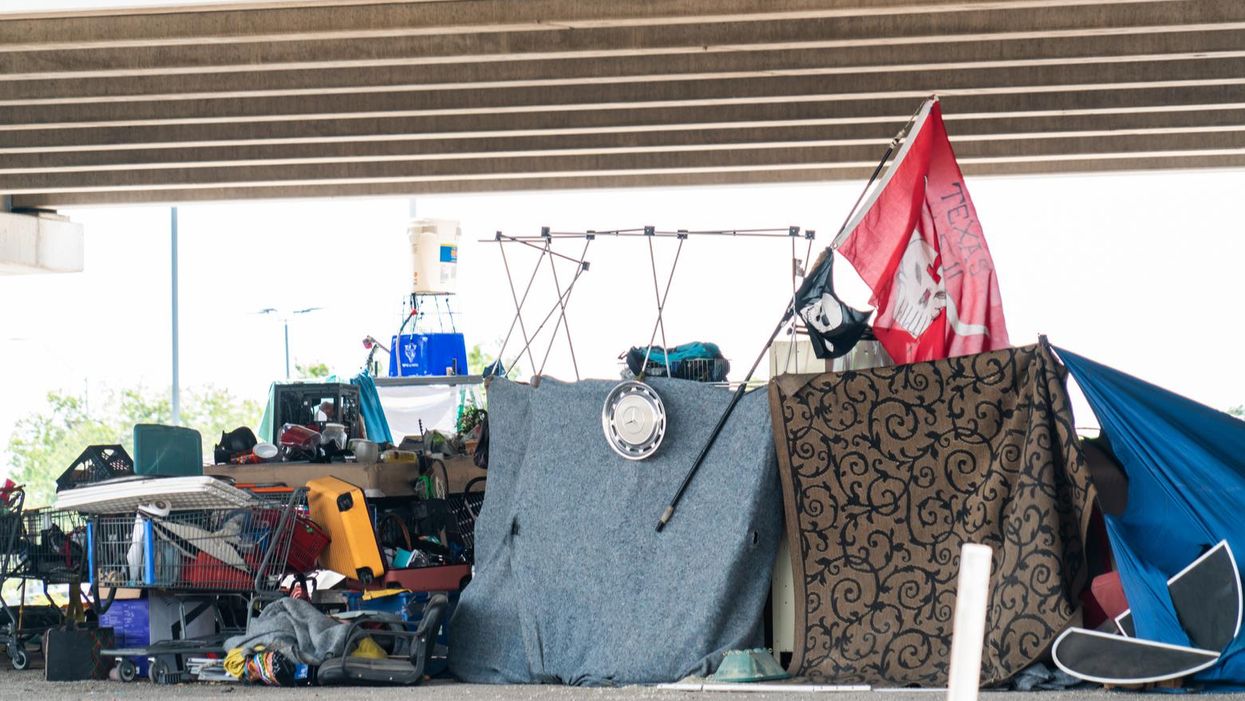 Image via Shutterstock.
The Texas Tribune
May 03, 2021
"Austin voters reinstate city's ban on public homeless encampments in one of several local Texas elections" was first published by The Texas Tribune, a nonprofit, nonpartisan media organization that informs Texans — and engages with them — about public policy, politics, government and statewide issues.

Austin voters reinstated a ban on public homeless encampments, according to The Austin American-Statesman. The paper reported that 57% of voters voted in favor of reinstating the ban, and 42% voted against it. Proposition B on that city's ballot will also criminalize panhandling at certain places and during certain times.

Austin's City Council decided to lift the ban on public encampments in certain areas in 2019, arguing that the policy had led to citations for people experiencing homelessness that hurt their ability to find housing. The move was quickly criticized by Gov. Greg Abbott, who promised to take action against Austin.

Although the visibility of homeless encampments has increased in Austin in recent years, both the Dallas and Houston areas have more people living in the streets, according to 2020 data. Some Austin residents have complained that allowing the encampments on public property — many are beneath overpasses or next to major roads — has created health and safety problems.

Meanwhile, the Texas Legislature is considering bills that would ban homeless encampments statewide. House Bill 1925 and Senate Bill 987 would make camping in an unapproved public place a Class C misdemeanor, punishable by a fine of up to $500.

The House bill was debated on the floor Monday, and Democrats attempted to amend the bill to decrease the penalties. After state Rep. Joe Deshotel, D-Beaumont, raised a point of order claiming a discrepancy in the bill's witness list while in committee, it was sent back to the Urban Affairs Committee; it's expected to receive a new hearing soon.

Austin Mayor Steve Adler has criticized both the city proposition and the Senate and House bills. Advocates for the homeless agreed that the bill won't help efforts to house people experiencing homelessness.

Homeless service providers in other Texas cities say they also are worried about how a potential state law banning encampments could play out. Regulations and enforcement related to camping in public places vary greatly among cities. Some, like Austin, don't have a universal ban, but camping is not allowed in places like public parks. Others, like Dallas, don't have a ban but will remove encampments if there are safety concerns.

Disclosure: Steve Adler is a former Texas Tribune board chairman and has been a financial supporter of the Tribune, a nonprofit, nonpartisan news organization that is funded in part by donations from members, foundations and corporate sponsors. Financial supporters play no role in the Tribune's journalism. Find a complete list of them here.

In Fort Worth mayoral race, Mattie Parker and Deborah Peoples will head to a runoff

Mattie Parker and Deborah Peoples will head to a runoff to replace Fort Worth Mayor Betsy Price, according to Decision Desk HQ.

Ten candidates competed to succeed Price, who is finishing her fifth term. While the office is nonpartisan, Price is a longtime Republican, and she is one of the few remaining GOP mayors of a large American city. Parker is Price's former chief of staff. Peoples is the chair of the Tarrant County Democratic Party.

The race marks a political inflection point for Fort Worth. It is the seat of a county — Tarrant — that was once the state's biggest red county, but that status has fallen into question after it went blue at the top of the ticket in the two most recent statewide elections. The county went for Beto O'Rourke in 2018 and Joe Biden in 2020.

Brockhouse is the former City Council member who forced Nirenberg into a nail-biter of a runoff in 2019. Brockhouse congratulated Nirenberg and his family in a statement, according to the Express-News.

“We have been blessed to serve our City and we are thankful for our family, our friends and every supporter who helped us and voted for us along the way," Brockhouse said. “I have always said you don't need to be Mayor to make a change in your community. You only have to care. We have cared and gave it our best shot."

While the office is nonpartisan, Nirenberg drew his support from Democrats, and Republicans coalesced around Brockhouse two years ago, particularly amid backlash to the council's decision to nix an airport contract for Chick-fil-A over its owners' support for anti-LGBT causes.

Brockhouse gave Nirenberg a real scare in 2019, but this time around was different. Nirenberg refused to debate Brockhouse, depriving him of an important spotlight, and the police and fire unions, which strongly backed Brockhouse in 2019, remained on the sidelines.

San Antonio voters narrowly rejected a measure that would have stripped the city's police union of collective bargaining power, according to unofficial results.

Supporters of the proposition argued it would lead to more accountability because contracts negotiated through collective bargaining often shield police officers who step out of line. The spotlight on police conduct is intenser than ever after the death last year of George Floyd, a Black man who died under the knee of a white Minneapolis police officer. Last week, a jury found the officer, Derek Chauvin, guilty of murder in connection with Floyd's death.

Some opponents of Proposition B claimed it is a form of “defunding the police," predicting that the absence of collective bargaining would lead to reduced paid benefits.

The proposition was opposed by the San Antonio AFL-CIO Central Labor Council, whose president, Tom Cummins, said that the ballot item “for many people is an emotional outlet on what's happening in the rest of the country."

This article originally appeared in The Texas Tribune at https://www.texastribune.org/2021/05/01/texas-local-election-results/.