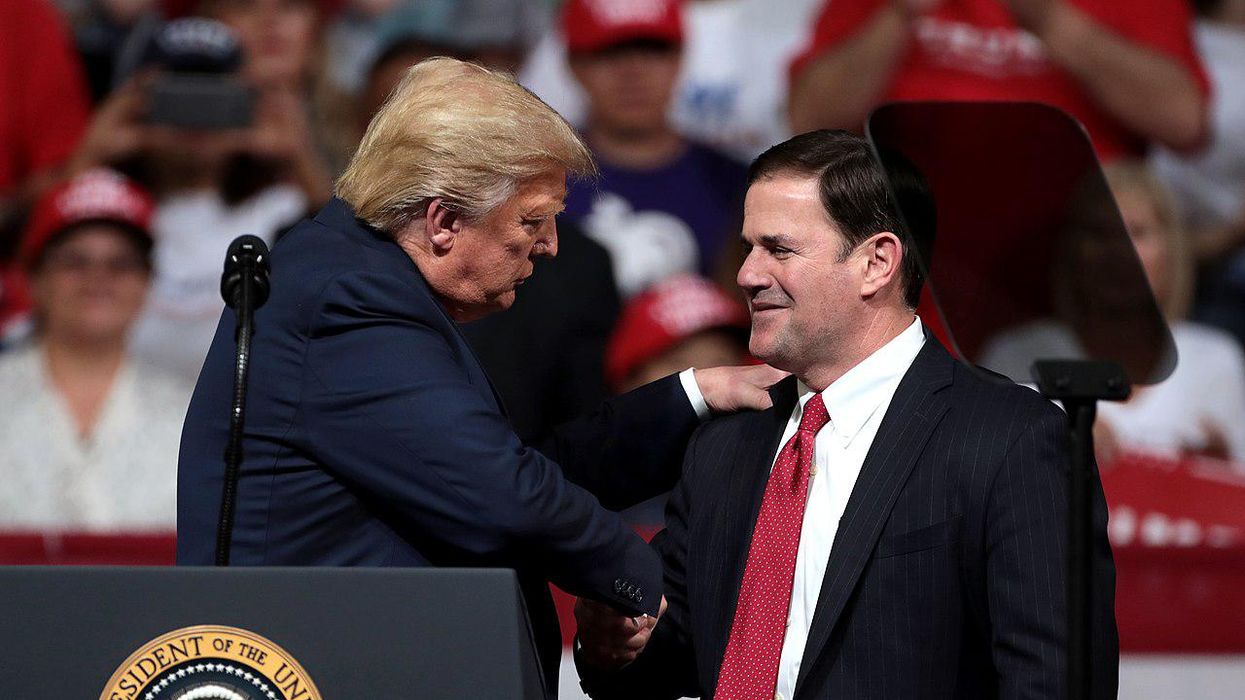 With devotees of former Present Donald Trump currently conducting a blatantly partisan audit of the 2020 election results in Maricopa County, Arizona, One America News Network has been offering glowing coverage of that event. Journalist Sarah Mimms, in an article published by BuzzFeed News on May 18, examines the connection between OAN employees and the audit — which was ordered by Republicans in the Arizona State Senate and is being conducted by the Florida-based firm Cyber Ninjas, whose founder Doug Logan is a far-right Trump supporters who pushed the former president's false claims of voter fraud in 2020.

"Two reporters at One America News, a far-right TV station, are running a dark money organization that they say is helping fund a counter-reality 'audit' that former President Donald Trump and his supporters believe will overturn Arizona's 2020 election results in his favor," Mimms explains. "What's more, one of those reporters, Christina Bobb, is the network's most visible correspondent covering the very 'audit' that she is helping scare up money for on OAN's airwaves, while she and the network enjoy unique access to the process where private contractors and volunteers are searching for fraud and have examined ballots for nonexistent watermarks and 'bamboo fibers.' OAN has a deal as the exclusive livestream partner for the audit."

Bobb hosts a program on OAN called "Weekly Briefing," and Mimms points out that on April 9, she tweeted that she had founded a group devoted to promoting the audit: Voices and Votes. According to Bobb, the group raised $150,000 that day.

"According to its website," Mimms observes, "Voices and Votes is run by Bobb as the CEO and president, as well as OAN's White House correspondent Chanel Rion, who is listed as the chief marketing officer, and Courtland Sykes, Rion's fiancé, who is listed as the group's chief operations officer."

Although the Maricopa County audit is being slammed as a joke by Trump's critics on both the left and the right, legitimate audits or recounts of the election results in Arizona have been conducted — and they showed that now-President Joe Biden won Arizona fair and square. Biden's Arizona victory was reported by the decision desk at Fox News on Election Night 2020 and was later certified by conservative Republican Arizona Gov. Doug Ducey.

Mimms explains why the current Maricopa County audit is a "farce," noting, "It's important to pause here and note that the audit itself is not really an audit at all. What happened is the Arizona Senate, which is controlled by 16 Republicans to 14 Democrats, sent a subpoena to Maricopa County — which was upheld by a judge, forcing the county to hand over 2.1 million ballots, as well as vote tabulators and a bunch of election data. The 'audit,' which is being run by outside contractors hired by the Senate, will have no force or effect on the 2020 election results; Joe Biden is president, and Arizona already did an audit of Maricopa County in the presidential race and didn't find a single ballot discrepancy. The county itself, which is not involved in the current Senate audit either, also hired two independent firms to review its elections equipment in February, which came back clean as well."