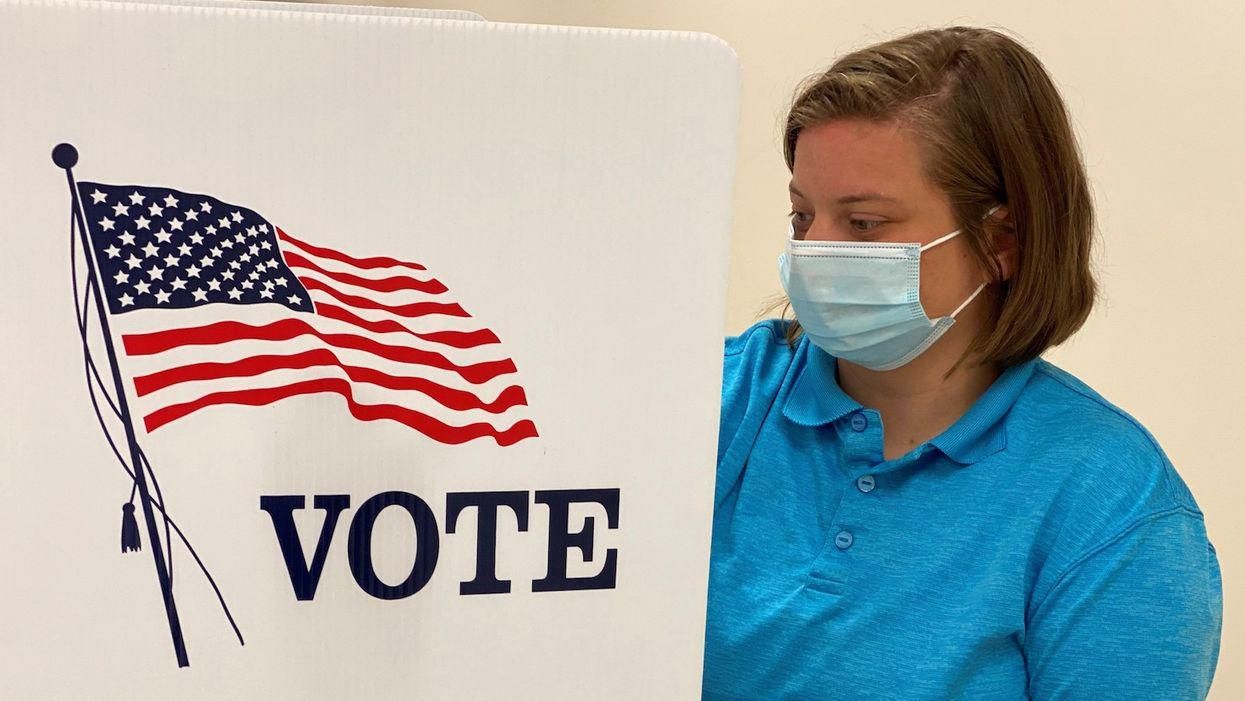 Image via Shutterstock.
Brett Wilkins
and
Common Dreams
May 11, 2021

Numerous corporations have funded the political action committees of state lawmakers backing the recent spate of anti-voter and anti-protest bills, even as many of the companies have spoken out in defense of voting rights and democracy, a report published Monday by Greenpeace USA revealed

The report (pdf)—entitled Dollars vs. Democracy: Companies and the Attack on Voting Rights and Peaceful Protest—says that 44 state lawmakers sponsored at least one anti-protest bill and one anti-voter bill in the past year. It also reveals that 53 of the 100 top corporate donors to lawmakers sponsoring anti-voter bills also rank among the top 100 contributors to anti-protest measures.

According to the report, the top 10 corporations that have invested the most money in lobbying for anti-protest bills since 2017 are all fossil fuel companies.

"Even though a growing number of companies have spoken out in defense of democracy and voting rights, many of these same companies contributed to legislators sponsoring anti-voter or anti-protest bills during their most recent election campaigns," the report notes.

Of the 100 companies who endorsed the April 14 "We Stand for Democracy" statement opposing "any discriminatory legislation or measures that restrict or prevent any eligible voter from having an equal and fair opportunity to cast a ballot," 12 contributed to the sponsors of 43 anti-voter bills analyzed.

Five of the 10 companies that donated most to sponsors of state anti-voter legislation also rank among the top 10 corporate donors to sponsors of anti-protest bills. Similarly, in the wake of the white supremacist attack on the Capitol, at least 130 companies "paused" political action committee (PAC) contributions to members of the "insurrection caucus." But at least 47 of these companies contributed to the sponsors of anti-voter legislation introduced since the January 6th insurrection.

Additionally, the report says the U.S. Chamber of Commerce opposes the For the People Act—a sweeping plan to expand voting rights, rein in dark money, and strengthen federal ethics rules passed by the House of Representatives in March—even though many individual chamber members have raised concerns about the types of attacks on democracy that the bill aims to address.

Executives from Boston Consulting Group, Deloitte, Ford, IBM, Microsoft, and United Airlines who have voiced opposition to state-level anti-democracy legislation currently serve on the chamber's board of directors, according to the publication.

🚨 BREAKING 🚨 We just released a report on the corporations funding the elections of extremist politicians behind th… https://t.co/1ImjGp7RSn
— Greenpeace USA (@Greenpeace USA)1620661141.0

The report notes that anti-protest bills target communities of color and "are a direct response to Black Lives Matter and other BIPOC-led movements, laying bare their racist intent."

Folabi Olagbaju, director of democracy campaigns at Greenpeace USA, said in a statement that "a healthy democracy is a precondition for a healthy environment. When everyone's vote counts and when everyone's constitutionally guaranteed right to peacefully protest is protected, our government becomes more accountable and capable of meeting the demand for racial justice and enacting solutions to the rapidly accelerating climate crisis."

"We hope this report sheds light on who is behind the attack on our democracy and right to protest, and that it will push corporations to take a stand for strong national standards for voting rights and election reform, and quit supporting politicians who sponsor or vote for anti-voter and anti-protest legislation," Olagbaju continued. "It's time to ensure all of us have a say in key decisions that affect us all and our elections reflect the will of the people, not corporations."

"It is now more urgent than ever to build a just transition away from fossil fuels and fight off attacks against protest and our freedom to vote, so that we can have a planet our communities can thrive on," he added.

Jana Morgan, director of the Declaration for American Democracy coalition, said that "despite the promising news of corporations speaking out against anti-voter laws in states like Georgia, Greenpeace's latest report demonstrates that there's more to be done to make the promise of democracy real for us all."

"It's time to end the dominance of big corporations and big money in our politics, and ensure that our politicians are held accountable to the will of all Americans, and not just the wealthy and powerful," Morgan continued. "To do so, corporations and our political leaders must support passing the For the People Act and the John Lewis Voting Rights Act. These transformative bills will ensure that politicians govern in the best interest of the people, and ensure the freedom to vote for all Americans."

"Corporate platitudes are not enough—we must build a system that ensures our elected leaders listen to every American," she added. "Our time is now: Democracy cannot wait."

The new Greenpeace report follows a Sunday Insider article revealing that several companies have broken their vows to stop contributing to the PACs of U.S. lawmakers who supported the so-called "Big Lie" that former President Donald Trump won the 2020 election. Offenders include Cigna, JetBlue, Koch Industries, and Toyota.

Additionally, corporate PACs are indirectly funding some of the 147 U.S. lawmakers who voted against certifying President Joe Biden's 2020 election victory by donating to congressional committees including the National Republican Senatorial Committee and the National Republican Congressional Committee. AT&T, Cigna, Intel, and Pfizer have all donated thousands of dollars to such committees, according to Insider.