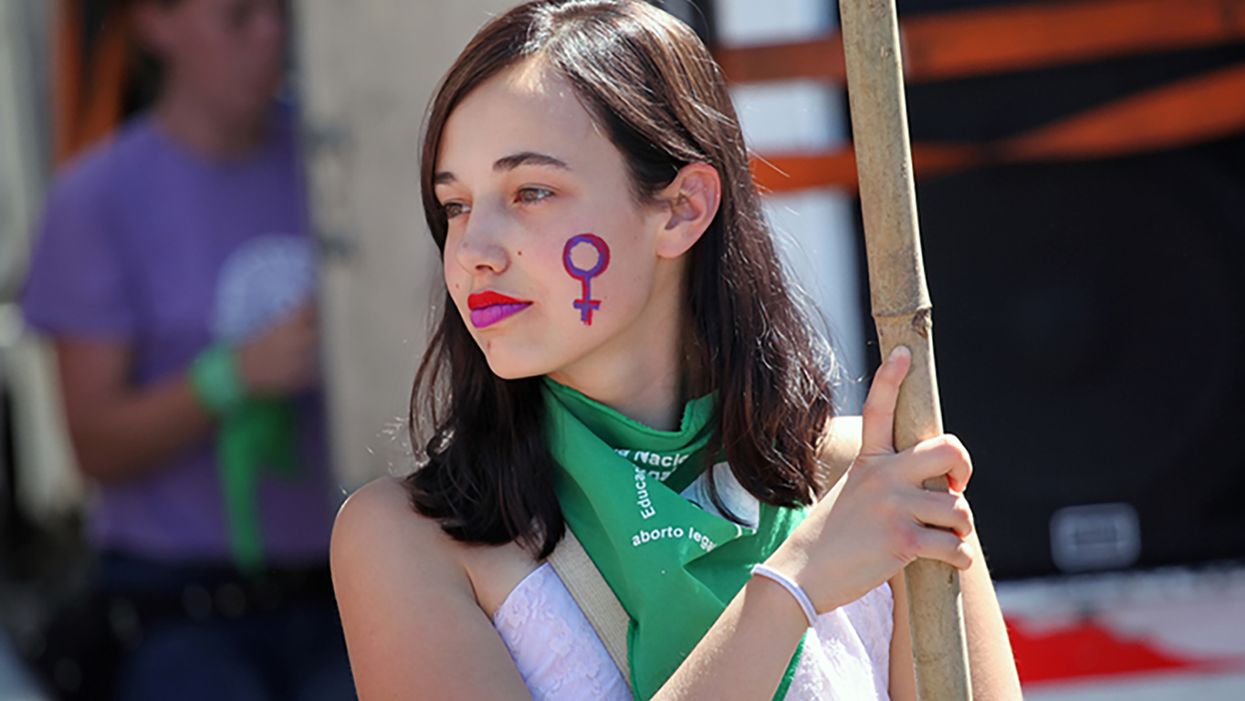 From Arkansas' near-total ban on abortion to a trio of "cruel and unnecessary" laws enacted in Oklahoma earlier this week, state lawmakers have pushed through an "unprecedented" number of anti-choice restrictions this year, according to an analysis released Friday.

The policy analysis from the Guttmacher Institute, which focuses on reproductive health and rights, concludes that 2021 is on track to be "the most damaging anti-abortion state legislative session in a decade—and perhaps ever." Several of this year's measures are abortion bans "designed to directly challenge Roe v. Wade and the U.S. constitutional right to abortion."

Between Monday and Thursday of this week, "28 new restrictions were signed into law in seven states—almost half (46%) of the restrictions passed so far in 2021. This was the highest number of new restrictions signed in a single week in at least a decade," the analysis says, pointing to measures in Arizona, Idaho, Montana, and Oklahoma.

The analysis adds that "a disturbing record was set this week: With its enactment of a new restriction on abortion clinics, Arkansas has now enacted 20 restrictions in 2021, tying Louisiana's 1978 record for the most restrictions in a single year."

"Looking ahead, abortion rights continue to face an all-out assault," the experts warn. "Among the most concerning states this week are Texas (where 17 restrictions have passed at least one chamber) and Oklahoma (where a conference committee is considering additional restrictions on medication abortion).

The vast majority of restrictions enacted so far were in states Guttmacher already considers hostile or very hostile toward abortion rights—and that "is no accident," according to Nash and Cross. They note that "the 2021 abortion restrictions largely build on earlier ones, as each additional restriction increases patients' logistical, financial and legal barriers to care, especially where entire clusters of states are hostile to abortion."

"As our earlier analysis predicted, state policymakers are testing the limits of what the new U.S. Supreme Court majority might allow and laying the groundwork for a day when federal constitutional protections for abortion are weakened or eliminated entirely," the analysis explains. The future of Roe was a key concern when former President Donald Trump announced Justice Amy Coney Barrett as his third appointee to the court last year.

While a partial or full reversal of the high court's landmark 1973 ruling would impact the rights of all people who are capable of becoming pregnant, the experts emphasize that "the damage would fall heaviest on people already marginalized and oppressed by structural inequities, including people with low incomes, people of color, young people and LGBTQ people."

"We're seeing right-wing ideologues engaging in a shock and awe campaign against abortion rights as part of a large and deliberate attack on basic rights that also includes a wave of voter suppression laws and attacks on LGBTQ people," said Nash, the institute's principal policy associate, in a statement to The Hill.

"The current barrage of coordinated attacks," she added, "must be taken seriously as the unprecedented threat to reproductive healthcare and rights that it is."

In response to the latest wave of reproductive rights rollbacks, Nash and Cross urge state policymakers, the Biden administration, and Congress to "safeguard the right to abortion, including through passage of the Women's Health Protection Act, which would establish federal statutory abortion rights for providers and patients against state restrictions and bans."

The bill was introduced in May 2019 by five Democrats, including Sen. Richard Blumenthal of Connecticut, who said at the time "as extremist lawmakers viciously attack women's reproductive rights in statehouses across the nation, the Women's Health Protection Act has never been more urgent or more necessary."

"This issue is about more than women's healthcare, it's about human rights—all our rights," said Blumenthal. "The Women's Health Protection Act will ensure women have access to safe and legal abortions, regardless of their zip code. It reaffirms what the Supreme Court and a majority of Americans have declared: Women have a constitutional right to control their own body and make their own choices, without abhorrent political overreach that has no basis is medical science or the Constitution."

President Joe Biden's first 100 days have already featured some victories for reproductive rights advocates—including the U.S. Food and Drug Administration lifting a restriction on accessing abortion medication during the coronavirus pandemic and the president rescinding the global gag rule. Federal lawmakers have also introduced legislation to end the Helms and Hyde amendments.

However, reproductive justice advocates have called on policymakers at all levels to go even further. On the 48th anniversary of the Roe decision in January, progressive lawmakers and advocates elevated calls to #ReimagineRoe and treat the ruling as a floor rather than a ceiling for rights and healthcare.

In a joint statement issued amid those demands, Biden and Vice President Kamala Harris made clear that their administration "is committed to codifying Roe v. Wade and appointing judges that respect foundational precedents like Roe."

"We are also committed to ensuring that we work to eliminate maternal and infant health disparities, increase access to contraception, and support families economically so that all parents can raise their families with dignity," the pair said. "This commitment extends to our critical work on health outcomes around the world."