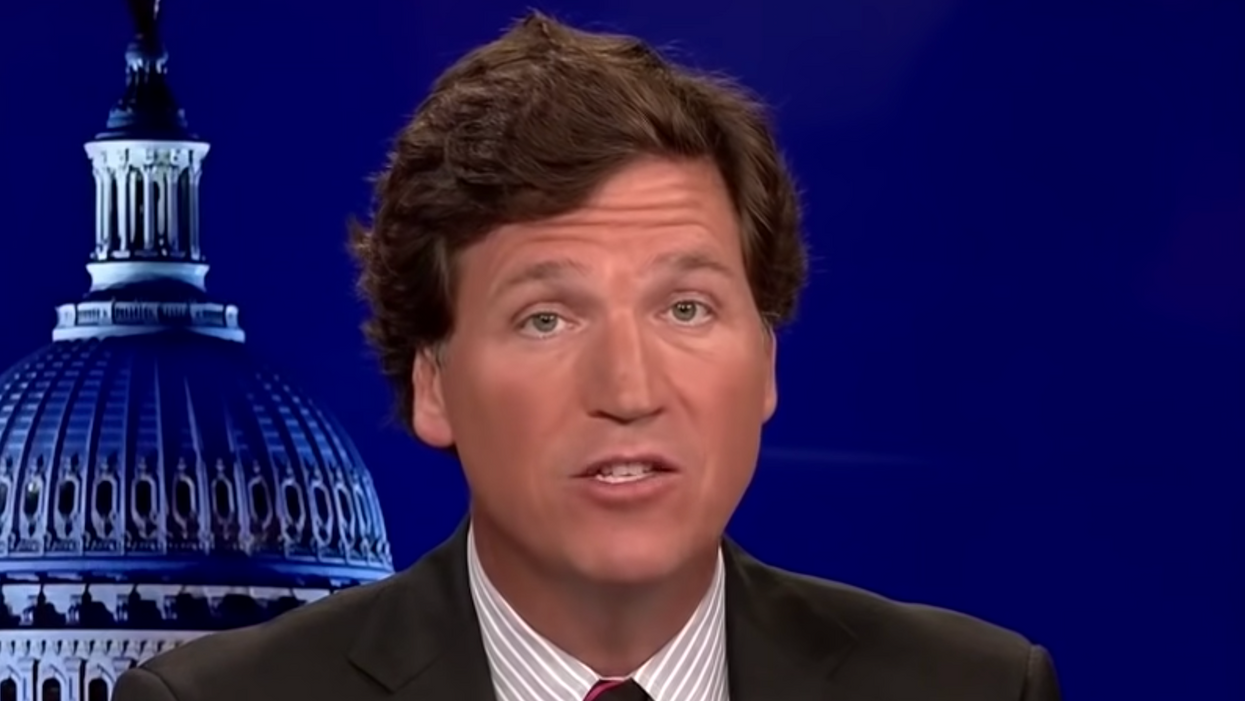 Fox News host Tucker Carlson is really determined to sell his audience on what is — and this cannot be stressed enough — a literal neo-Nazi conspiracy theory. Neo-Nazis and other white nationalist groups have long pushed the idea that a shadowy cabal of Jews is secretly conspiring to "remake" America and "steal" it from its rightful owners, white Christians. They are supposedly doing this by "importing" non-white people — who neo-Nazis believe to be mentally inferior and therefore easily controlled by the shadowy Jewish conspiracy — into the U.S.

Carlson's only spin is replacing the word "Jews" with "Democrats," but other than that, he's lifting "replacement theory" wholesale from the neo-Nazi dregs of the internet and now is repackaging this ridiculous conspiracy theory as if it were an inarguable fact, much to the delight of white nationalists. And because Carlson's main modus operandi is trolling, he's relishing the negative attention he gets by hyping a racist conspiracy theory and he's using his audience's love of liberal-triggering to encourage them to mindlessly burrow deeper into the worldview of unapologetic fascists.

Carlson is a moral monster. It's likely he has been this way since his high school "Dan White Society" days. Sadly, he is a monster that must be dealt with, despite the unfortunate risk of troll-feeding. It's not just because Carlson has an audience that regularly tops 3 million viewers, though that alone is terrifying. It's that he is a smart man whose strategy for selling this conspiracy theory is sinister and clever. To fight back, it's crucial that progressives don't fall into the trap he is setting.

Basically, Carlson is pulling off two bait-and-switch routines. First, he falsely conflates any cultural change with his ridiculous "replacement" conspiracy theory. Second, he tries to paint the debate one over whether change is real — something that literally no one contests — so as to avoid talking about the real issue, which is how it's nuclear-level racist to react to cultural change like it's some kind of existential threat. In reality, it's just what happens if you're lucky to live long enough to experience it.

Both tactics were on full display on Wednesday night, when Carlson took a break from trying to martyrize Derek Chauvin to once again promote "replacement theory" by bashing Rep. Ted Lieu, D-Calif., who was born in Taiwan but grew up in Ohio. Lieu was angry at Rep. Scott Perry, R-Penn., for parroting the "replacement theory," and retorted on Twitter. "And with every passing year, there will be more people who look like me in the US. You can't stop it. So take your racist replacement theory and shove it."

"In other words, you're being replaced, and there's nothing you can do about it, so shut up," he shouted with what can only be described as a maniacal laugh.

Here's the thing, though: Lieu didn't give any game away. Liberals have never denied that immigration changes society. Of course it does, along with generational shifts, changing fashions, and evolving social norms. When I was young, people wore low-rise jeans and MTV still played music videos. Now it's skinny jeans (though apparently not for long) and TikTok. Change is inevitable, and generally good, as anyone who has a memory of hair-destroying styling products in the bad old days can attest.

What makes "replacement" a conspiracy theory, however, is that it invents this elaborate fantasy ascribing change not to the normal churn of human society, but to a sinister and hidden conspiracy of Jews and Democrats who are secretly inflicting change to pull off some grand scheme.

That is, of course dumb. It's like "neo-Nazi message board" levels of dumb. Carlson deflects attention from that by pretending that we're debating the factual assertion "change is real," and lashing out at straw-liberals who, though only in his imagination, are pretending it's not.

More importantly, Carlson is propping up this fake debate so that he can smuggle in his real argument, which is that change is bad.

Carlson's whole gambit depends on the presumption that change is a terrible thing. But that belief is both delusional and, on the subject of immigration, racist. As Adam Serwer of The Atlantic recently wrote, the same kinds of arguments were made "at the turn of the 20th century" to argue that "Polish, Russian, Greek, Italian, and Jewish" immigrants "posed a danger." Carlson's hysterics make about as much sense as some man in the 1920s arguing that the bagel is the downfall of American civilization.

Lieu's point actual point was, of course, that people like him are a valuable addition to the American community, and we should welcome the changes immigration brings. Carlson knows that he can't win that argument, especially when reminded of how idiotic such arguments from the past look to modern eyes. As Sewer notes, the Tucker Carlsons of the 1930s were so racist and paranoid that even Nazis rejected some of their ideas as "a bit too strict." So instead, Carlson raves about secret conspiracies and pretends that liberals are hiding something. It's pure projection, of course. The only people hiding anything are Carlson and his allies, who are hiding their true motivation: naked racism.

The "replacement" and "change" language feeds on the very human fear of mortality that is especially powerful with the largely elderly Fox News audience. As Heather "Digby" Parton wrote last week for Salon, "The fact is that we are all going to be 'replaced' by the generations that come up behind us." Change is often terrifying because it's a reminder that time is passing by and that the grave awaits us all. For many people, it's easier to let this sour-faced, middle-aged prep school brat lash out at immigrants than grapple with their fears of change and death. Carlson is a cynical demagogue, no doubt, and that's why he's a dangerous one.