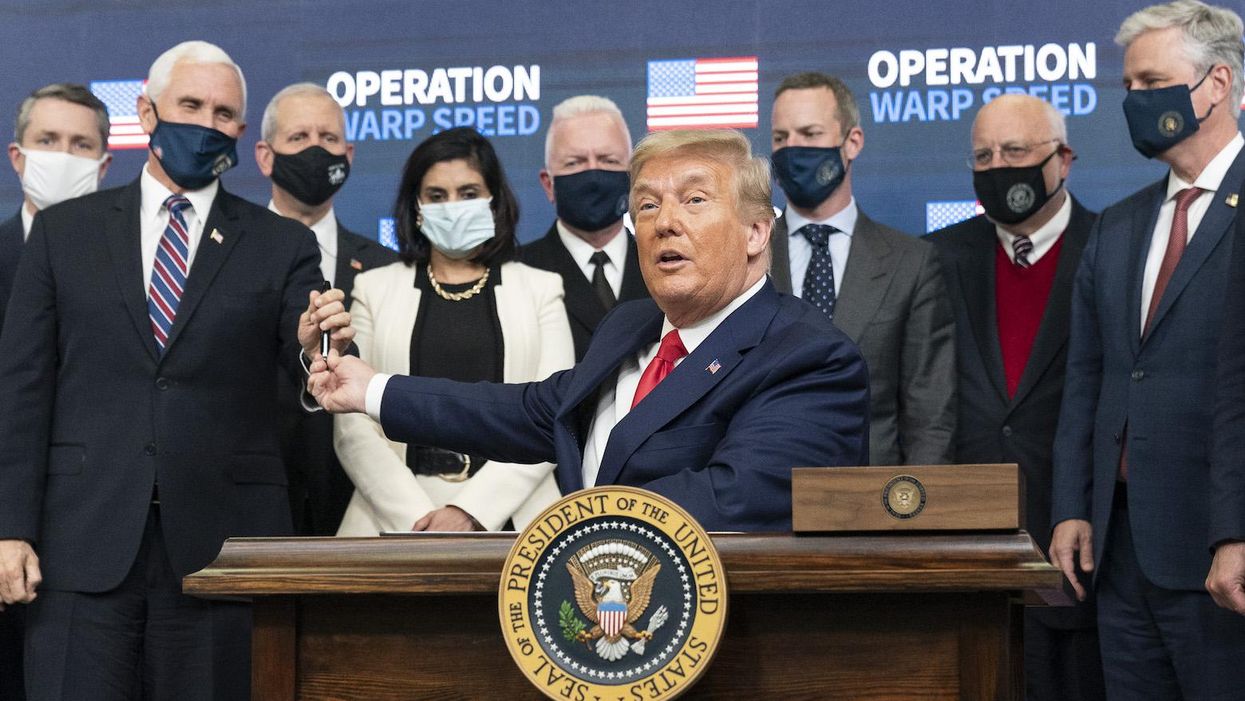 President Donald J. Trump hands Vice President Mike Pence a signature pen after signing an Executive Order ensuring that the American people have priority access to COVID-19 vaccines developed in the U.S. or procured by the U.S. Government, at the Operation Warp Speed Vaccine Summit Tuesday, Dec. 8, 2020, in the South Court Auditorium at the Eisenhower Executive Office Building at the White House. (Official White House Photo by Shealah Craighead)

News that the Johnson & Johnson vaccine can cause blood clots in about one in 1 million women under 50 has exploded across the social media world. Republicans, along with countries that hate America, are smiling.

A fellow who runs a couple of communities on a popular social media site called into my program yesterday saying that the vaccine news had caused an "absolute explosion" of vaccine denialism. People who'd been on the fence are now outright opposed to getting the jab.

And Trump and the GOP are making hay with the announcement.

Discouraging Americans from getting vaccinated, and thus preventing President Joe Biden from getting the economy back on track, has been the first order of business for the GOP ever since Trump lost the election.

It is now their primary Electoral Strategy going into 2022 and 2024.

And, if the spam I'm seeing in my inbox and the trolls I'm seeing on social media are any indication, several countries that would like to see America fail are also enthusiastically encouraging Americans not to get vaccinated.

Tucker Carlson and Fox News are also pushing the "uncertainty, be careful!" meme.

Trump, of course, tripled down on the news.

He floated a bizarre conspiracy theory of his own, that he had promoted back in December as well.

Feigning outrage and using it to trash our new president, Trump wrote: "The Biden Administration did a terrible disservice to people throughout the world by allowing the FDA and CDC to call a 'pause' in the use of the Johnson & Johnson COVID-19 vaccine."

This is the same Donald Trump who, along with his wife, were both vaccinated while he was still president but went out of his way to keep it secret until long after he had left the White House.

He's all about sabotaging Joe Biden. There's probably nobody in the world Trump hates more, at this moment, than the guy who beat him badly in 2020. And he partially blames Pfizer.

"Remember," Trump wrote yesterday, "it was the FDA working with Pfizer, who announced the vaccine approval two days after the 2020 presidential election. They didn't like me very much…"

Warning his followers, once again, not to trust the American government, he added that the FDA "has to be controlled" particularly because of the "long time bureaucrats within."

If you want to see what the US will look like if Trump and the GOP prevail and create widespread vaccine denialism and hesitancy, just look at Michigan right now. The British variant is ripping through that state, throwing huge numbers of people under 40 into hospitals.

This is exactly what Republicans want.

It's the reason why the Republicans who control the Michigan House and Senate forced through legislation over Governor Whitmer's unsuccessful veto requiring the state's website to point out that the Johnson & Johnson vaccine was tested on fetal stem cells.

Now another whole cohort of Americans are all hysterical about "baby parts" in their vaccines (they're not) and vaccine compliance is starting to collapse in Michigan.

It's also why about half of all the Republicans in the US Congress refuse to disclose whether they have been vaccinated, and Senators Paul and Johnson openly proclaim that they won't take a vaccine.

It has nothing to do with "freedom." It's all about sabotaging the Biden administration. And doing the same to any state with a Democratic governor.

Many Americans were shocked when they realized that Donald Trump's deadly push to "open the economy" in September and October was just to try to get the economic numbers up so he could win reelection.

They're even more dismayed now, learning that Trump and the GOP are actively working to sabotage any effort to get the pandemic under control so Democrats will lose next year's elections and in 2024.

Trump's attempt to overturn the 2020 election, and his encouragement of the January 6 insurrection against our republic, were both treasonous and seditionist. He has demonstrated beyond any doubt that he is a traitor to our ideals and our nation.

But encouraging the deaths of hundreds of thousands more Americans is taking treason and sabatoge to a whole new level.

It took our media about three years to figure out and explicitly point out that Donald Trump was intent on destroying democracy in America. It took them more than two years to use the word "lies" to describe his…lies.

As Americans today are dying all across our country because of the vaccine skepticism promoted by Trump and the GOP, it's more important than ever that all of us, including our media, call this what it is.

Thom Hartmann is a talk-show host and the author of The Hidden History of American Oligarchy and more than 30 other books in print. He is a writing fellow at the Independent Media Institute and his writings are archived at hartmannreport.com.