The evidence of Trump's final act of 'sabotage' 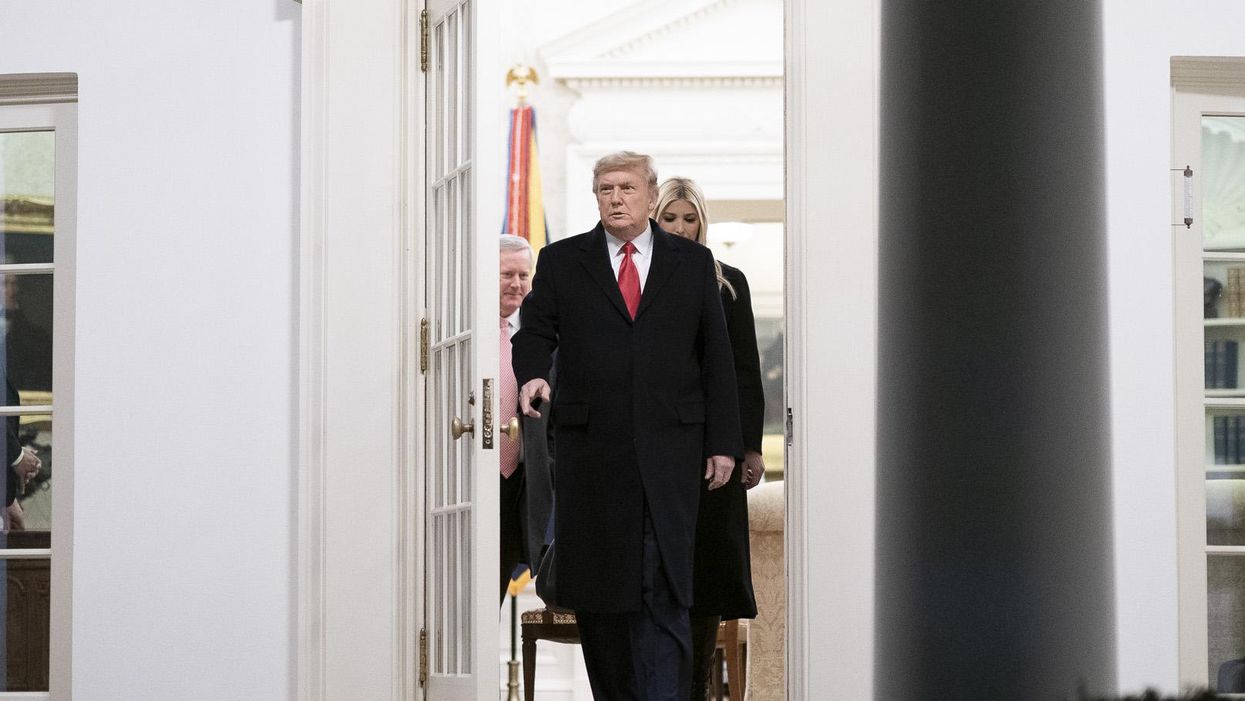 President Donald J. Trump walks from the Oval Office to board Marine One on the South Lawn of the White House Tuesday, Jan. 4, 2021, en route to Joint Base Andrews, Md. to begin his trip to Georgia.

The Census Bureau announced that Texas would gain two House seats after the latest population count, while Florida, Colorado, North Carolina, Oregon and Montana would each gain one. California, New York, Pennsylvania, Illinois, Michigan, Ohio and West Virginia will each lose a seat. But those numbers were well short of the projected changes, particularly in states with fast-growing Latino populations like Texas, Florida and Arizona. All three of those states were projected to gain one additional seat apiece, sparking concerns that Latino residents were undercounted, which could have important effects on political power and the distribution of federal funds.

"There is a serious issue with undercounting of Hispanics in this Census," warned Sam Wang, a professor who runs the Princeton Election Consortium and Princeton Gerrymandering Project. "The states that underperformed relative to July 2020 population estimates included Texas, Florida, Colorado, Arizona and Nevada — all Hispanic-rich states. A real risk of poor representation."

It will be months before the Census Bureau releases more detailed data in August, and only after that can the congressional redistricting process begin.

"The initial results are surprising enough that once more details are released, we will be able to better determine to what extent the Latino population was fairly and accurately counted," Arturo Vargas, president of the National Association of Latino Elected and Appointed Officials, told The Los Angeles Times.

Myriad factors undoubtedly affected the census count, not all of which are political. "The census numbers as a whole have been shaped by a lot of negative and positive forces," Thomas Wolf, senior counsel at Brennan Center for Justice, told Mother Jones. "We had wildfires, COVID, displacement, hurricanes."

But many were quick to blame Trump's failed attempt to add a citizenship question to the census for a potential undercount of Latino voters after accusing the administration of trying to "sabotage" an accurate count. The Supreme Court ultimately rejected the attempt and advocacy groups spent months on outreach to traditionally undercounted communities, but some fear damage may already have been done.

"It caused people to not respond to the census," Kimball Brace, president of the redistricting consulting firm Election Data Services, told the Arizona Daily Star. "And, as a result, they were all lower than what they were anticipating. … If you got all of those press reports and commentary and everything else talking about how much Trump doesn't want people to respond if they're Hispanic, you don't necessarily have to have a question on the survey."

The reapportionment data stunned political observers in Arizona, which saw its population grow by 11% over the last decade but failed to gain a House seat. Some lawmakers faulted Republican Gov. Doug Ducey, who invested nearly $2 million to boost response rates, for not doing enough to counter Trump's impact on the count.

Arizona state Sen. Martín Quezada, a Democrat from Phoenix, faulted Trump's census efforts for costing the state an additional seat but said Ducey deserves blame too after Quezada's bill to fund census efforts in areas heavily impacted by COVID-19 was rejected by the Republican-led legislature.

Rep. Greg Stanton, D-Ariz., said in a statement that "Ducey refused to stand up for Arizona and instead followed former President Trump's strategy to intimidate Latinos and discourage their participation."

Rep. Ruben Gallego, D-Ariz., said on Twitter that he had helped lead the effort to extend the census deadline "because we *knew* Latinos, Native Americans, and Arizonans in rural & hard-to-reach areas weren't being counted. This undercount is an intentional part of Trump's legacy."

A spokesperson for Ducey pushed back on the claims, telling KPNX-TV that the state's rates were similar to other states and that response rate from tribal communities was high.

Census Bureau officials also told NPR they are confident in the accuracy of the population number.

But the missed projections were evident in other states with large and growing Latino populations, including California, which lost a House seat for the first time in history. Democrats widely blamed Trump.

"The Trump administration did everything it could to prevent an accurate count in the #2020Census, and now Californians are paying the price," tweeted Rep. Norma Torres, D-Calif. "The culture of fear he instilled within our communities jeopardizes billions in funding that our state deserves."

Though Texas emerged as the big winner with two additional seats, state Democrats slammed Republican officials for failing to counter Trump's efforts to "manipulate" the census.

"Knowing we were at risk of a considerable undercount, Gov. Greg Abbott and our Republican leaders did nothing," Rep. Chris Turner, chairman of the state House Democratic Caucus, said in a statement. "Last session, House and Senate Democrats filed bills and attempted to amend the budget to ensure Texas invested in counting every resident. All these efforts were blocked by the Republican majority," he added.

Monday's release was largely touted as a win for Republicans, with states carried by Trump seeing a net gain of three seats while states won by President Biden lost three. While red states will see a slight boost in their Electoral College power, it's not entirely clear how the data will affect redistricting.

"Reapportionment itself means little compared to the redistricting fights to come. The bigger shift in House seats are likely to come from how districts are drawn, not how many districts each state gets," Wasserman, of the Cook Political Report, told Axios. "On balance, I think this reapportionment offers a small boost for Republicans, but the bigger boost is likely to come from how Republicans draw these seats in Florida, Texas, North Carolina and Georgia."

California is expected to lose a Democratic seat while West Virginia will lose a Republican seat, presumably canceling each other out. Illinois and Ohio already have heavily partisan maps so Illinois' Democratic majority and Ohio's Republican majority are each expected to lose a seat, also canceling each other out, according to Wang, the Princeton University professor. Pennsylvania is expected to lose a Democratic seat, but since Democrats control the map-drawing process in New York, they are likely to cancel that out by eliminating a seat that favors Republicans, Wang predicted. New "fair map" laws and independent redistricting commissions in Ohio and Pennsylvania may lessen the partisan impact.

Michigan's new independent redistricting commission is expected to reverse the state's heavily partisan Republican gerrymander, but it's not clear how that state's map will shake out. Colorado also has an independent commission that will likely add a Democratic seat, according to Wang, but Oregon's bipartisan process is expected to cancel that out with an additional Republican seat. Montana's new seat (doubling the state's House delegation from one to two) will almost certainly favor Republicans, and North Carolina's Republican-led legislature is also likely to add a favorable seat, although the state's districting maps have faced numerous legal challenges in recent years.

That means few changes to the makeup of Congress across those states, leaving Republican-led Texas and Florida as the major question marks.

Florida's Republican government is expected to try to add a favorable seat but that effort could be challenged under Florida's new "Fair Districts" requirement approved by voters. Since the state's Supreme Court is all Republican, however, advocates have been skeptical that law will actually be enforced.

"Republicans seem likely to get a net advantage from redistricting. But it's mainly because of single-party redistricting in states like Florida and North Carolina," Wang wrote on Twitter.

The Cook Political Report projects that Republicans will gain three to four additional House seats from the next round of redistricting.

"The most predictable effect of redistricting is that red states' delegations are likely to get redder and blue states bluer," Wasserman wrote on Twitter, "meaning the nation's political conditions are likely to continue to deteriorate."