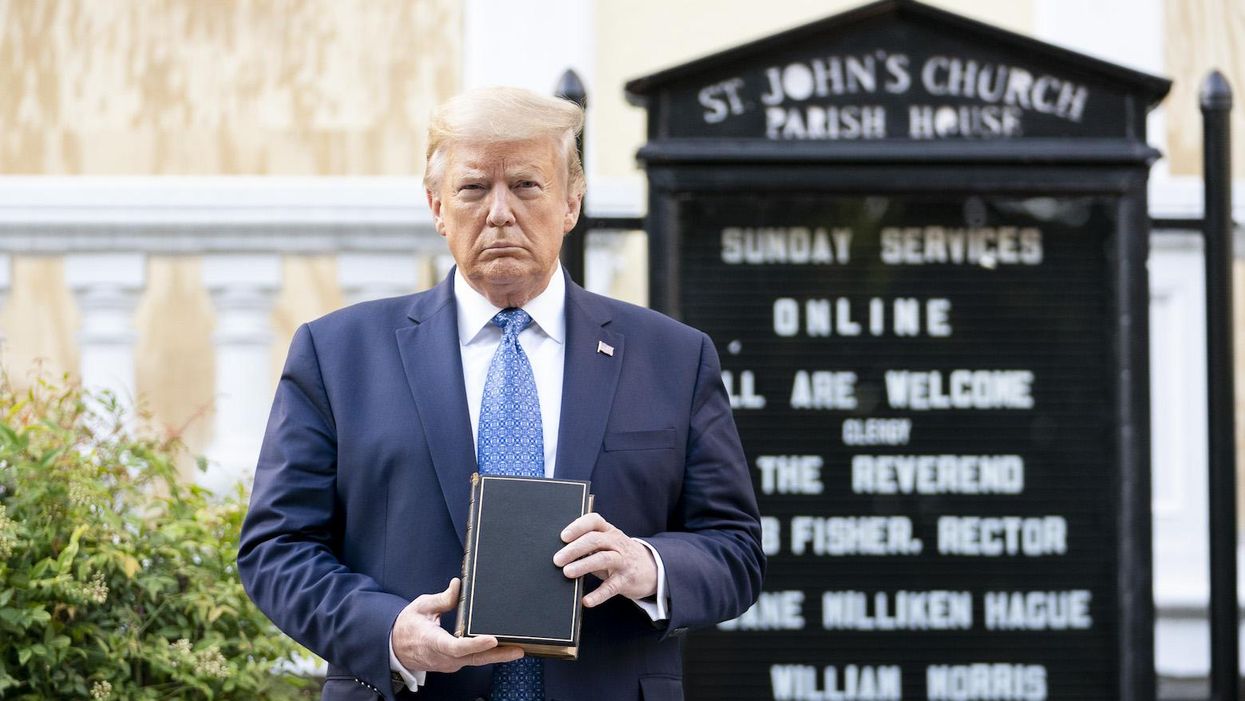 Republican politicians are doubling down on exploiting religious people, and its now killing churches in a way not seen in living memory.

We've watched absolute depravity wash across our politics over the last few decades, promoted by the same politicians who wave a religious banner to get votes. It ranges from a stolen election in 2000, to being lied into two wars, and having four years of a presidency with nothing to show for it except a tax cut for billionaires, the destruction of international relationships, and 500,000 dead Americans.

We had a president who raped women; made fun of mentally disabled people; tried to take away Obamacare, Social Security, Medicare, food stamps and unemployment from American citizens; and intentionally tore America apart racially and religiously just for money and power.

He ripped children from their mother's arms on the border, and then tortured those kids for years, killing at least seven of them. He called Nazi white supremacists "very fine people," tried to eliminate healthcare for poor Amerians, and vilivied refugees — all in the name of Christianity.

Prominent among the mob that attacked the US Capitol on January 6 were "Jesus 2020" flags and Christian iconography. One group carried a large wooden cross, and hundreds of people knelt to pray before attacking the capitol on that terrible day.

The day before, January 5, a group of religious Trump supporters held a "Jericho March" in DC, carrying oversize crosses and singing hymns as they paraded in circles around the capital as if they were Joshua circling the ancient city of Jericho so its walls would supernaturally collapse.

This is not what Jesus would have done; supporting politicians was anathema to his ministry. He preached morality, not politics.

Throughout my lifetime, church attendance had been fairly steady, ranging from a high of 73% when I was born in 1951 to a low of around 65% when George W. Bush was sworn into office. This year, though, it hit 47%.

Fewer than half of Americans now attend church. Organized religion is collapsing across our nation.

Back at the founding of our republic, Thomas Jefferson and James Madison had a running debate about religion and government throughout most of their lives.

Jefferson, like Thomas Paine, Ben Franklin and George Washington, was a Deist, essentially an atheist. He was convinced that one of the biggest threats to what he called "a republican form of government" was religion.

He was terrified that ministers or priests might run for political office, and even proposed what became Article VI of the Constitution, which says, "[N]o religious Test shall ever be required as a Qualification to any Office or public Trust under the United States."

Madison, a churchgoer, believed that America would be just fine with Christians in charge, but that the biggest threat to religion and our country's churches would be their corruption by the government.

When he became President, Madison's first veto was to reject a piece of legislation that would've given a federal subsidy to a church in Washington DC to feed needy people.

No government should be giving money to churches, Madison said, regardless of purpose, and the proposed law he vetoed would, he wrote in his veto message, "be a precedent for giving to religious societies as such a legal agency in carrying into effect a public and civil duty." He insisted the money go straight from the government to the poorhouses and not run through the churches, because he was convinced it would corrupt them.

Turns out they were both right. And the GOP has promoted both the harm to government and the harm to organized religion.

The Republican Party has been cynically manipulating Christians for political gain, particularly white evangelicals, ever since Ronald Reagan and his Vice President George HW Bush hired Bush's son, George W., to do "outreach" to the white Evangelical community.

In exchange for their votes, Republicans have repeatedly promised — and delivered — to block IRS enforcement of laws that a church cannot maintain their tax-exempt status if they engage in politics.

They've also poured literally billions of taxpayer dollars into churches to provide services from foster care to daycare to meals to medical services, all in ways that would've given President and "Father of the Constitution" Madison a heart attack.

Churches and multimillionaire televangelists, for their part, have returned the favor by preaching Republican politics from the pulpit and on thousands of religious radio stations across the country.

Rightwing pastors have become a fixture in Republican politics, as Jeff Sharlet chronicles in his book The Family. From $100,000 heated dog houses to multiple multimillion-dollar mansions to private jets, their embrace of the GOP has corrupted their own ministries and confused their followers.

And now, at the behest of Donald Trump and the Republican party, white Christians are literally killing each other. White evangelicals are the one, identifiable single group in America with the highest probability of refusing to get a vaccine.

Having lived inside the Reagan/Bush/Trump cult for decades, they've been conditioned to believe any old bullshit Republican politicians feed them.

So when Trump and his fellow homicidal Republican governors told them that wearing masks was not a good thing, and cast doubts on the vaccine (Trump and his wife got vaccinated, but in secret during the last weeks of his presidency), they were primed and completely vulnerable to crazed conspiracy theories promoted on the internet by hustlers and narcissists in America and hostile foreign governments pretending to be Americans.

As a Christian myself, and a person who agrees with John Donne's sentiment that "every man's death diminishes me," this saddens me deeply.

On the other hand, setting aside the unnecessary deaths, it might be a good thing. The rot in today's version of white Evangelical Christianity has grown so deep and so destructive that a wake-up call is necessary. Indeed, a reformation is needed, both in religion and politics.

From the days that Reagan was cutting deals with a generation of television preachers mostly interested in mansions and private jets through today's preachers pushing politicized vaccine misinformation, the corruption of religion by Republican politicians has become a full-blown crisis for many parts of the church and her followers.

The depravity of Republican politics is killing religion, or at least what we today call religion. At the same time, conservative "religious leaders" have done their best to fleece Republican parishioners.

Will Republican politicians stop exploiting religion for their own gain? Will people of faith turn away from the modern-day Republican Caesars whose gnarled, depraved fingers are reaching out to them every Sunday?

Or will America end up like most Scandinavian and Northern European countries, with churches relegated to ceremonial spaces for weddings and funerals and political parties avoiding the subject of faith?

I don't have an answer, but asking the question is vital.