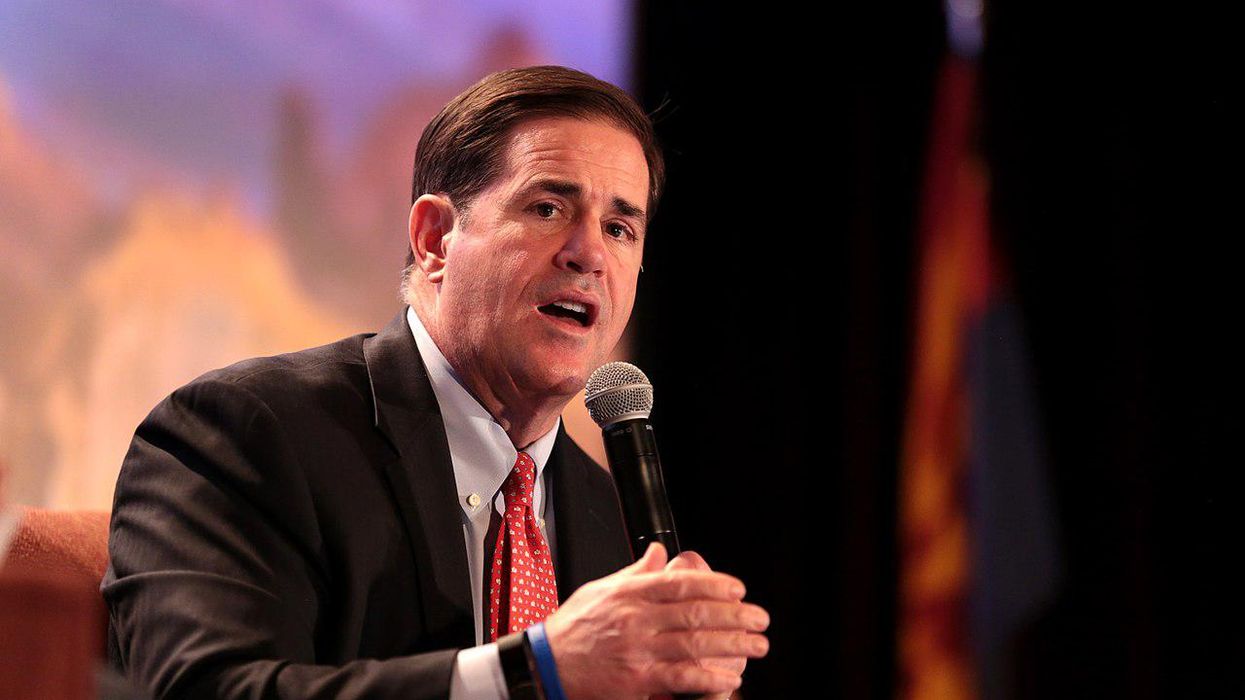 Former President Donald Trump's political vendettas are not limited to Democrats by any means. There are also some Republicans he despises for acknowledging Joe Biden as president-elect following the 2020 presidential election, including Rep. Liz Cheney of Wyoming, Sen. Mitt Romney of Utah, Rep. Adam Kinzinger of Illinois and Georgia Secretary of State Brad Raffensperger. And according to Daily Beast reporters Sam Brodey and Asawin Suebsaeng, Trump is plotting revenge against Arizona Gov. Doug Ducey, a conservative Republican, for certifying now-President Joe Biden's Electoral College victory in his state.

In an article published on April 26, Brodey and Suebsaeng explain, "It's April 2021, and Donald Trump still can't get past his grudge with Republican Gov. Doug Ducey for refusing to overturn the 2020 election results in Arizona. The ex-president is still so bothered by Ducey's refusal to try to throw out Democratic votes in Arizona that he's told associates he would gladly and personally spoil any of Ducey's future political plans."

Ducey, the Beast reporters note, was a "stalwart Trump supporter" and endorsed him in the 2020 presidential election. But when Ducey acknowledged that Biden won Arizona fair and square, he committed an unforgivable sin in the minds of Trump and many of his sycophants.

"In other conversations since his post-presidency began," Brodey and Suebsaeng note, Trump "has repeatedly discussed the importance of hobbling Ducey's future prospects at every possible turn, hoping to make the Arizona governor a pariah in his own party."

Under Arizona law, Ducey cannot seek a third term as governor — and there has been talk of him running for the U.S. Senate. Both of Arizona's U.S. Senate seats are presently occupied by centrist Democrats: Sen. Kyrsten Sinema and Sen. Mark Kelly. Ducey, however, has not committed to a Senate run.

Brodey and Suebsaeng observe, "A former CEO at the ice cream chain Coldstone Creamery, Ducey is considered among the GOP's best prospects to run against Kelly, who defeated former Sen. Martha McSally (R-AZ) in November to win the seat once held by John McCain. Kelly is at the top of the GOP's target list for 2022, and flipping his seat is central to their hopes of reclaiming the majority."

For many years, Arizona was a deep red state closely identified with the Republican conservatism of Sen. Barry Goldwater and later, Sen. John McCain — a self-described "Goldwater Republican" or "Goldwater conservative." But three Democratic victories in Arizona in recent years underscore the fact that it has evolved into a swing state: Sinema in 2018 and Biden and Kelly in 2020.

According to the Beast's sources, Trump has even said that he will support a Democrat over Ducey if the Arizona governor runs for the Senate. Of course, Kelly wouldn't want to be seen anywhere near Trump in 2022.

"In recent weeks, the twice-impeached former president has gone so far as to tell some close associates that if Ducey decided to run for Senate and managed to lock up the Republican nomination in 2022, he would consider traveling to Arizona to campaign for Democratic Sen. Mark Kelly, according to two people familiar with the ex-president's private rantings," Brodey and Suebsaeng write. "Neither of the sources believed the former president was being entirely serious, in the sense that Trump and his current political operation aren't going to be 'caught dead campaigning to keep the Senate more Democrat,' as one of them said. But his offhand remarks drove home the point of how much Trump wishes to see the Arizona governor run out of the Republican Party."