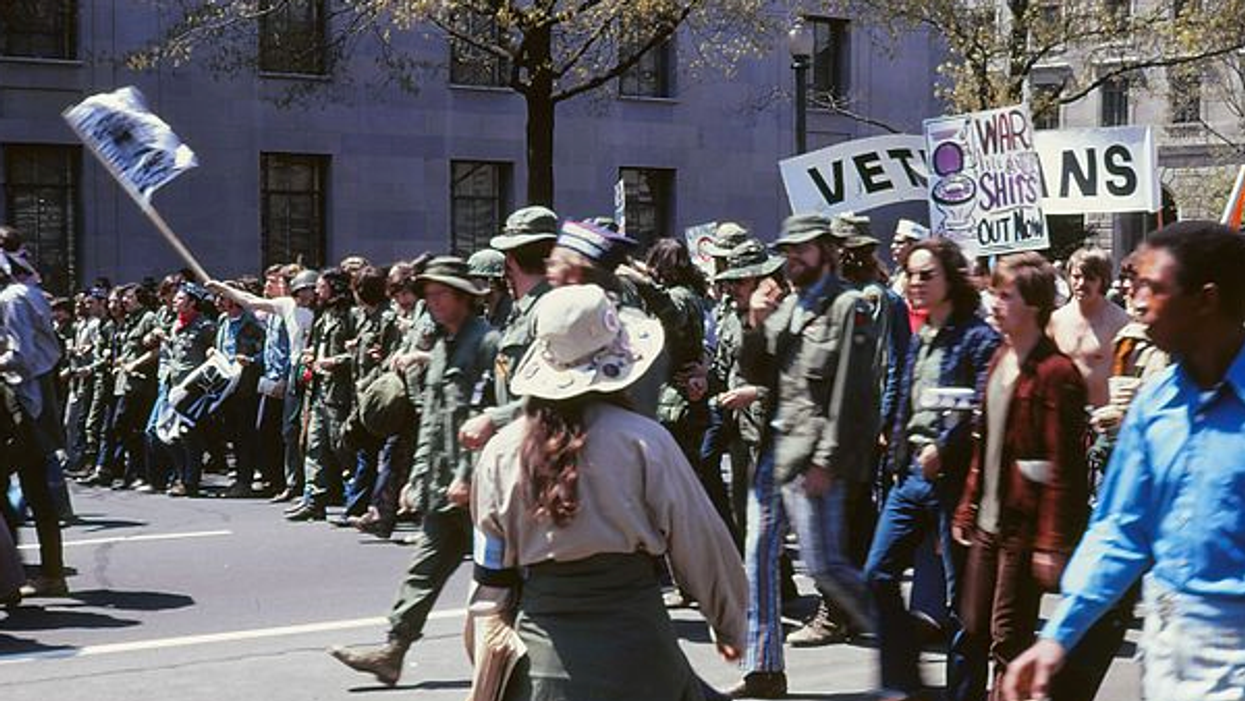 They called their trip to Washington, D.C., an "invasion." Vowing not be "deterred or intimidated by police, government agents, [or] U.S. marshals," they arrived outfitted for war in fatigues and jungle boots with weapons and gas masks firmly in hand. Calling themselves "concerned citizens" and "patriots," they announced their intention to "protect the flag" by "stop[ing] all business as usual, until the government recognizes and responds positively to our demands."

No, these were not the self-professed patriots who stormed the U.S. Capitol Building on January 6, 2021.

This was back in 1971 when President Richard Nixon claimed to be fulfilling his campaign promise of "peace with honor" by lowering the number of American ground troops in Vietnam. Much to the horror of thousands of recently returned GIs, the civilian branch of the most vocal and sustained antiwar movement in American history took the bait and stopped protesting.

And thus, on the evening before Patriots' Day, twelve hundred members of Vietnam Veterans Against the War ("VVAW") arrived in Washington from around the country for what they called Operation Dewey Canyon III in a pointed rebuke of the recent American expansion of the air war into Laos under code names Operation Dewey Canyon I and II.

At first the public was confused. The men who descended on the nation's capital in olive drab, some with bandoliers strapped across their chests, did not look anything like the closely clipped GIs featured in the military recruiting posters plastering America's post offices. These guys had beards and long hair.

"Son, I don't think what you're doing is good for the troops," a Daughter of the American Revolution complained to one them, as the veterans marched past the DAR's Memorial Hall.

"Lady, we are the troops," was the ready reply.

After four days spent in such peaceable pursuits as lobbying their congresspeople, laying funeral wreaths at Arlington National Ceremony for both the American and the Vietnamese dead, holding a candlelight vigil at the White House, and testifying in front of the Senate Foreign Relations Committee, the veterans announced their plan to descend on the Capitol Building, which the Nixon administration decided to surround, preemptively, with a version of the same kind of barrier fence that encircles it now.

The nation held its collective breath.

But rather than storm the seat of the legislative branch of the U.S. government, the veterans set about assembling a makeshift platform on the west side of the Capitol, which they equipped with a powerful sound system. At the appointed time, those who were not confined to wheelchairs walked up to the microphone one-by-one. Holding up their medals, ribbons, and citations, each man told the assembled crowd of veterans and journalists what the nation's highest honors meant to him.

"A symbol of dishonor, shame, and inhumanity," said one veteran as he hurled his medals over the barrier fence.

"Worthless," said another as the pile of discarded honors grew.

Many of the veterans called out the American government for being racist towards South Asians and others.

"I symbolically return my Vietnam medals and other service medals given me by the power structure that has genocidal policies against the nonwhite peoples of the world."

"Our hearts," many of the veterans declared, "are broken," and their copious tears proved it.

In taking a stand against the war in front of the Capitol Building, the veterans were following in the footsteps of Martin Luther King Jr., who addressed the American people in 1963 from the steps of the Lincoln Memorial as a means of asking them to measure the distance between the promise of the Emancipation Proclamation and the reality of Jim Crow. VVAW was similarly asking the country to note the difference between the promise of an inclusive and transparent government, as represented by the welcoming façade and the usually open doors of the Capitol Building, and the secret air war the Nixon administration was conducting.

These first veterans to protest a war in which they had served won their countrymen's respect. Noting that the day they began their protest was the "anniversary of the day the 'shot heard round the world' was fired at Concord Bridge," one Boston newspaper asked any readers who might be reluctant to recognize the veterans as patriots to remember that "in 1775 the colonial forces were also unruly and young."

After being photographed and filmed by all of the major news outlets throwing away their medals and discarding what turned out to be Mattel-manufactured toy M16s, the veterans packed up their gear and policed their campsite on the National Mall. Just to be sure they left it in better shape than they had found it, they planted a tree. Then they went home to their local VVAW chapters where they continued to work to end the war by mobilizing other sacred symbols. The New England chapter marched Paul Revere's route in reverse, stopping at the famed Revolutionary War battlefields in Concord, Lexington, and Charlestown to perform mock search-and-destroy missions in a demonstration of the difference between fighting against an imperialist regime and becoming one. On another occasion, antiwar veterans signaled their distress about the ongoing war in Southeast Asia by hanging an upside-down American flag from the crown of the Statue of Liberty. And when the war was finally over in 1975, VVAW set to work advocating for better mental health care for those American servicemen who had been traumatized by being asked to do the most un-American thing imaginable: deny another country its own April 19, 1775.

On this Patriots' Day, fifty years after a battalion of Vietnam veterans brought their anguish and their outrage to the Capitol Building, the nation owes its thanks not only to the colonial militiamen who lost their lives along the famed Battle Road, but also to their direct descendants, the antiwar veterans who, in reminding a nation of its foundational values, sought to reset its course.

Elise Lemire is the author of the just released Battle Green Vietnam: The 1971 March on Concord, Lexington, and Boston (University of Pennsylvania Press) and other titles. She is Professor of Literature at Purchase College, SUNY.