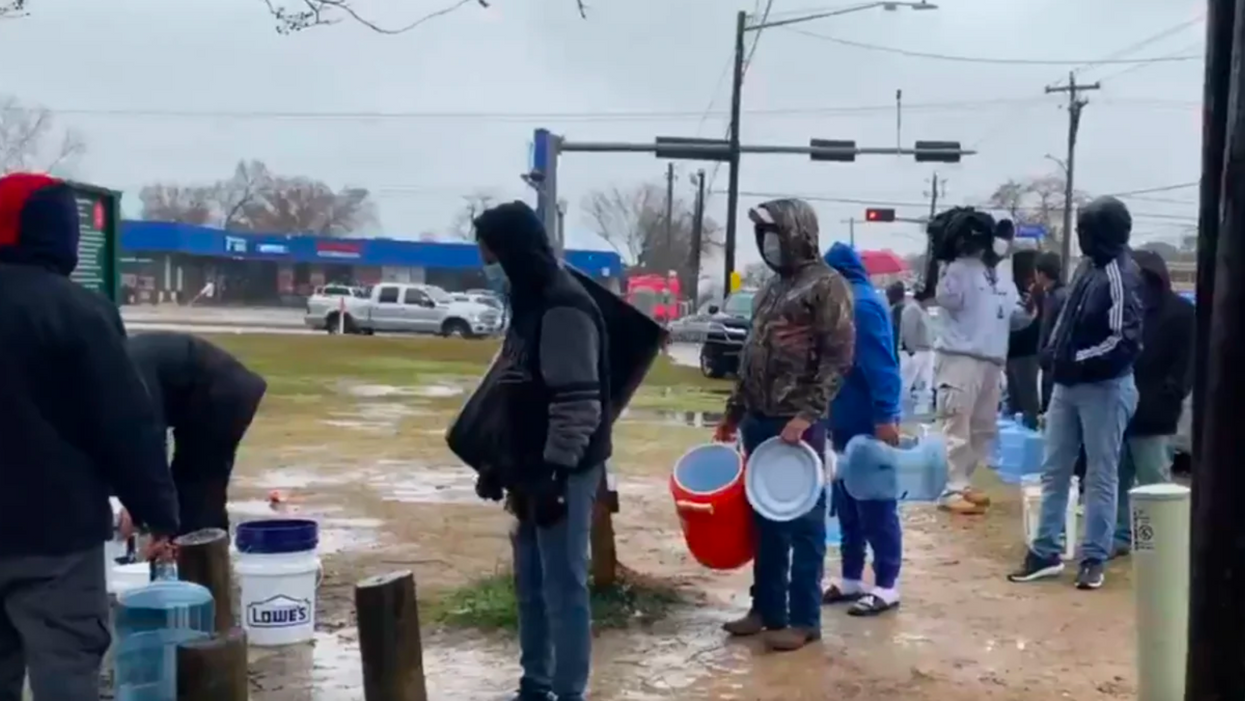 Image via Screengrab.
Mitchell Ferman
and
The Texas Tribune
April 19, 2021

"Despite natural gas failures during winter storm, Texas lawmakers target renewable energy in the aftermath" was first published by The Texas Tribune, a nonprofit, nonpartisan media organization that informs Texans — and engages with them — about public policy, politics, government and statewide issues.

Texas lawmakers have been advancing sweeping legislation to address some of the major issues stemming from February's deadly winter storm and catastrophic power outages. But some of the legislative moves are targeting renewable energy sources, like wind and solar, which experts and some lawmakers say seems more like a way to protect oil and gas interests than fix problems with the state's beleaguered power grid.

Tucked into Senate Bill 3, which seeks to overhaul the state's electricity market, is a key provision that would shift the financial burden of ancillary services, which help ensure power is generated continuously to Texas' main electricity grid, to renewable energy providers. Texas electric providers currently cover the ancillary services costs.

State Sen. Nathan Johnson, a Dallas Democrat, said he'd feel better about the bill “if there is logic to doing this."

“But I'm convinced that we're making a big mistake by attacking a problem that isn't the problem just because we feel like it might be the problem, when the data says the opposite," Johnson said on the Senate floor in late March.

Wind power is a renewable energy source that was expected to be a fraction of winter power generation. All sources — from natural gas, to nuclear, to coal, to solar — struggled to generate power during the February storm.

Yet some prominent Texas Republicans during and after the storm blamed the widespread outages on frozen wind turbines. Targeting renewable energy is not new for the Texas Legislature, but lawmakers have revamped their attacks on the sector after February's power outages left millions without electricity for days.

Johnson ended up voting in favor of SB 3, which has now been referred to the House as it takes up a series of related, standalone bills. Johnson has said he ultimately voted in favor of SB 3 because there are more positives in the legislation than negatives.

He also voted in favor of Senate Bill 2, legislation that would reform the governance of the Electric Reliability Council of Texas, which operates the state's main power grid.

On Tuesday, a relatively mild spring day, ERCOT asked Texans to conserve power as it struggled to keep with demand as a high number of power plants were offline for maintenance. And the operator's early summer assessment found that a combination of a severe drought, heat wave and low winds could lead to more power outages later this year.

Among the legislative reforms of ERCOT is a provision that would alter who can represent power generators in their seat on ERCOT's board of directors. Currently, any generator has been able to become the sole representative of independent Texas power generators on the ERCOT board, so long as they are a member of the ERCOT market.

SB 2 says the board member representing independent power generators has to own and control more than 5% of “installed capacity in the ERCOT market." That means only the largest energy companies, which are oil and gas firms such as NRG and Vistra Corp., would qualify. No renewable energy companies meet the Senate bill's threshold.

“It looks like some sort of culture war thing — fossil fuels versus renewables," said Michael Webber, energy resources professor at the University of Texas at Austin. “Which is a false choice. You can have both."

The oil and gas industry is politically powerful in the state and donates immensely to politicians, including more than $5.1 million in the 2020 election cycle to Texas state House and Senate candidates, according to data from the nonprofit National Institute on Money in Politics compiled by Rice University expert Mark Jones.

Yet during various hearings in February and March about the outages, lawmakers spent relatively little time questioning natural gas production and transportation executives.

During the February storm, the state's gas industry regulators quickly launched a campaign defending the sector, spurred on through emails, tweets and public statements.

“Many including myself have warned for years about the dangers of relying too heavily on unreliable, intermittent forms of electric generation like wind and solar to meet the energy needs for 30 million Texans," Railroad Commissioner Wayne Christian wrote in his newsletter to supporters Feb. 17.

Earlier this month, one Republican lawmaker took a swipe at the renewables industry. Republican state Rep. Briscoe Cain of Deer Park introduced an amendment — which eventually failed — on to a jobs training bill for military veterans that would have eliminated wind and solar energy jobs from the program.

“Oil and gas is king in Texas," Cain said in early April on the House floor. “We want to make sure they have the best jobs... I happen to think the best jobs are not in wind power and solar."

But as Texas leaders try to protect natural gas and target renewable energy, big businesses have entered the legislative fight.

Some corporations — such as Amazon, Google and JP Morgan — that have already invested in Texas have come out in opposition to the legislation that would shift the financial burden of ancillary services to renewable energy. Those companies are among many corporate giants to tell Gov. Greg Abbott, Lt. Gov. Dan Patrick and House Speaker Dade Phelan in a letter that the cost of ensuring power is continuously generated should be covered by all energy sources, not just renewables.

“Companies want to move to Texas and one of the opportunities is to contract for renewable and cheap power," said Jeff Clark, Texas-based president of the pro-renewables group Advanced Power Alliance.

Disclosure: Advanced Power Alliance, Amazon Web Services (AWS), Google, Rice University and University of Texas at Austin have been financial supporters of The Texas Tribune, a nonprofit, nonpartisan news organization that is funded in part by donations from members, foundations and corporate sponsors. Financial supporters play no role in the Tribune's journalism. Find a complete list of them here.

This article originally appeared in The Texas Tribune at https://www.texastribune.org/2021/04/19/texas-renewable-energy-oil-gas/.