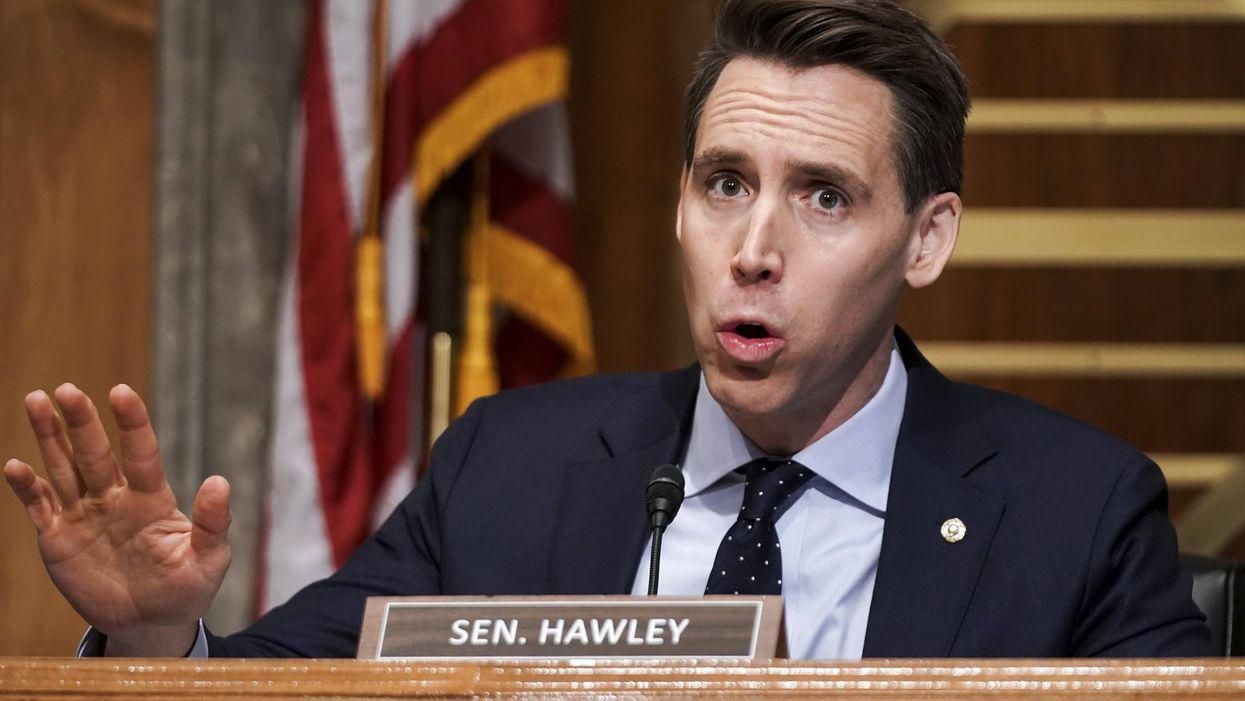 Former President Donald Trump and his Republican allies sought to derail President Joe Biden's first 75 days in office by obstructing his transition and Cabinet selections. But their efforts appear to have backfired after the Senate confirmed all of Biden's picks for the 15 traditional Cabinet positions — and with more bipartisan support than Trump's nominees received.

Senate Republicans, particularly Trump allies like Sens. Josh Hawley of Missouri and Ted Cruz of Texas, as well as major recipients of corporate donations like Sens. John Cornyn of Texas and Steve Daines of Montana, delayed the confirmations of Biden's Cabinet selections for weeks, dragging out the final confirmation until March 22, two months after Biden's inauguration. But despite the delay tactics, Biden became the first president since Ronald Reagan in 1981 to have all of his first choices confirmed to their positions. And despite GOP obstruction, Biden's choices received more bipartisan support than Trump's. Biden's first 12 picks were confirmed by an average of nearly 61 votes, three more than the average Trump nominee even though Republicans had a four-vote advantage in the Senate in 2017, according to a new report from the Accountable.US Senate War Room, a left-leaning government watchdog group that tracks Republican obstruction.

"Senate Republicans spent months lobbing one bad faith attack after another against Biden's slate of qualified nominees," Mairead Lynn, a spokesperson for the group, said in a statement. "They gave it their best shot, but ultimately failed to do anything more than delay the inevitable bipartisan confirmation of Biden's Cabinet secretaries, and were left with nothing to show for their months of delays."

Hawley voted against every nominee for the 15 Cabinet secretary positions while Cruz only voted to confirm Defense Secretary Lloyd Austin, leading the Senate in votes against Biden's nominees. But many of Biden's Cabinet and Cabinet-level choices ultimately received significant support from Republicans. Sixteen of his 21 confirmed picks received support from at least two-thirds of the Senate. Only the nomination of Neera Tanden, Biden's first choice as director of the Office of Management and Budget, failed in the Senate over complaints by Republicans (and centrist Democrats like Sen. Joe Manchin of West Virginia) about her combative tweets, while the nomination of MIT professor Eric Lander to head the Office of Science and Technology Policy remains pending.

Republicans geared up to fight Biden's nominees early on, with Sen. Marco Rubio, R-Fla., urging his party shortly after the election to obstruct the new president's choices because Democrats had been "so unfair" to Trump's nominees, even though many of Trump's choices — including former Education Secretary Betsy DeVos, Commerce Secretary Wilbur Ross and EPA administrator Scott Pruitt — drew concerns from ethics watchdogs over extensive conflicts of interest and questionable qualifications. The Democratic-led Senate was far more supportive of former President George W. Bush's Cabinet selections, approving 85% of his choices before he was inaugurated and confirming his full Cabinet just 12 days after he took office.

While Biden's predecessors had numerous Cabinet picks approved by the time they got into office, the Senate did not confirm Biden's first nominee until Inauguration Day. Instead, Republicans used much of the transition period to back Trump's baseless attempts to sow doubt about Biden's victory with fictitious claims of fraud. Cruz and Hawley led the Senate objections to the certification of electoral votes in several states even after a mob of Trump supporters attacked and overran Capitol Police and hunted lawmakers through the halls of Congress.

After Biden's inauguration, Senate Minority Leader Mitch McConnell, R-Ky., continued the obstruction by delaying an organizing resolution that would allow the new Democratic majority to take over Senate committees. Republican senators vowed that it would be an uphill battle for the new president's Cabinet selections, drawing allegations of "hypocrisy" from groups like Accountable.US after senators like Ron Johnson, R-Wis., warned during Trump's administration that delaying confirmations would leave the government "unfairly and unnecessarily crippled."

Despite the Republican complaints, Trump had hearings for 12 of his Cabinet selections before his inauguration, according to the Accountable.US report, while Biden had just four. "The delay of President Biden's Cabinet was particularly egregious given the national security concerns stemming from the deadly insurrection that President Trump and some Republicans in the Senate helped incite on January 6," the report argued, echoing past statements by Republicans. Cornyn, the No. 2 Republican in the Senate, warned in 2017 that it was imperative to confirm Attorney General Jeff Sessions for the "safety of our communities." The Senate did not confirm Attorney General Merrick Garland until March 10, nearly two months after Biden's inauguration and more than a month later than Sessions' confirmation in 2017.

McConnell's delay in handing over control of the Senate allowed Sen. Lindsey Graham, R-S.C., to remain at the helm of the Senate Judiciary Committee at the start of Biden's term. Graham used that power to delay Garland's confirmation hearing, arguing that Trump's second impeachment trial required the "Senate's complete focus." Graham drew criticism for blocking the hearing after refusing even to meet with Garland when Republicans likewise refused to hold a hearing on his Supreme Court nomination in 2016. Garland was ultimately confirmed with 70 votes.

Hawley similarly blocked quick consideration of Homeland Security Secretary Alejandro Mayorkas, criticizing Biden's proposed immigration policies and complaining that the administration would not back Trump's border wall. Biden's transition team slammed Hawley for the move, calling it "dangerous," particularly in the wake of the Capitol riot that the senator helped incite. Mayorkas, who had already been confirmed three times by the Senate to other positions, was ultimately approved by the Senate with 56 votes.

Other Republican senators drew scrutiny for their ties to industries regulated by departments they hamstrung with delays. Accountable.US called out 10 Republican members of the Senate Energy and Natural Resources Committee for taking $8.8 million in donations from the oil and gas industry, including more than $1.4 million in the 2020 cycle, before stalling the nomination of Interior Secretary Deb Haaland, an ally of environmental groups who opposed the Dakota Access pipeline. Sen. Steve Daines of Montana was one of Haaland's biggest critics after receiving more than $1.1 million from the oil and gas industry, drawing allegations from the group that the "delay is just a big show for Daines' oil and gas donors to prove he's still on their side." Republicans stalled Haaland's confirmation until mid-March, with Sen. Maria Cantwell, D-Wash., describing Haaland's nomination as a "proxy fight over the future of fossil fuels." Haaland was ultimately confirmed by a razor-thin 51-49 margin.

Republicans also waged a campaign to block the confirmation of Health and Human Services Secretary Xavier Becerra. The 14 Republican members of the Senate Finance Committee, which oversaw his nomination, received $9.6 million from the pharmaceutical industry. Cornyn, who has taken more than $1 million from Big Pharma, even suggested that Becerra was not qualified for the job because he did not "work for pharma" like his predecessor Alex Azar, drawing allegations from groups like Accountable.US that he was "laying the groundwork for obstruction on behalf of special interest allies." Heritage Action for America, a right-wing group with a long record of working on behalf of the pharmaceutical industry, launched an ad campaign to defeat Becerra's nomination. Republicans ultimately stalled his confirmation until March 18, when he was approved on a party-line 50-49 vote.

Republicans also drew allegations of hypocrisy in their opposition to Tanden over combative tweets aimed at senators after defending Trump's hostile tweets for years before he was finally banned by the social network and ignoring antagonistic tweets from his Cabinet nominees. Accountable.US argued that the Republican opposition to Tanden, Becerra, Haaland and Mayorkas underscored a "troubling pattern around the treatment of Biden's nominees of color." Janet Murguia, president of the Latino advocacy group UnidosUS, also called out Republican senators for their treatment of nominees of color, suggesting it was a " double standard because we're seeing that historically other administrations have been able to move much more quickly."

The Accountable.US report noted that Republican statements regarding Biden's nominees of color tended to use "harsher" language than ones about his white nominees, using terms like "radical" and "dangerous."

"They know by using buzzwords that they're able to try to conjure up these tropes about women of color leaders," Fatima Goss Graves, president of the National Women's Law Center, told The Washington Post earlier this year. "These are code words that are used not only to distract but to conjure up an image in your mind."

Republicans ultimately failed to stop any of Biden's 15 Cabinet secretaries from being confirmed. Despite the stalled process, Biden was able to catch up to the pace at which the Senate approved his predecessors' nominees, filling a historically diverse Cabinet that has wasted little time in rolling back many Trump-era policies and rolling out plans to modernize and invest in infrastructure, health care, the economy and the environment.

"The American people saw through these flimsy lines of attack," Lynn told Salon, "and were reminded that Senate Republicans' loyalty lies not with workers and families, but with the special interests and wealthy donors that foot the bill for their political campaigns."