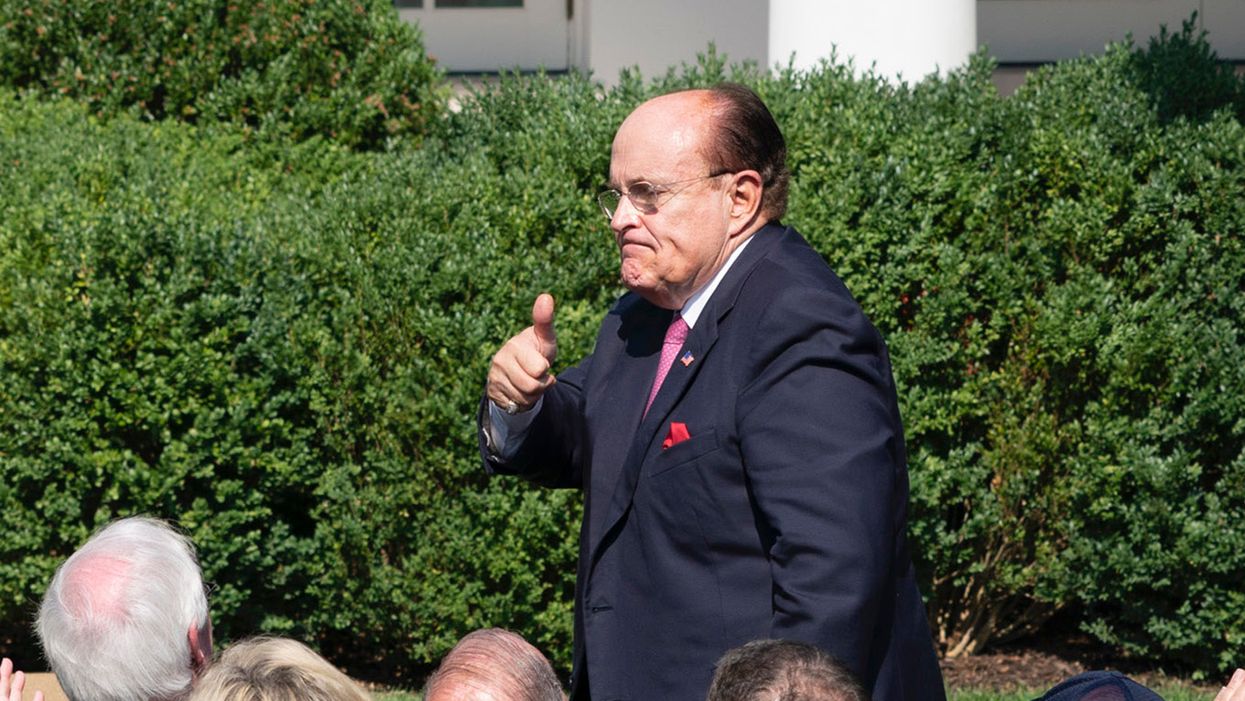 While the federal raid on Rudy Giuliani's home has attracted the national media's attention, there's a thread in the story leading up to the issuance of the search warrant that may be underplayed.

The New York Times story that initially reported the news on Tuesday noted that the investigation into Giuliani has been ongoing for years, growing out of his conduct implicated in the first impeachment of former President Donald Trump. He was instrumental and deeply involved in Trump's 2019 effort to induce Ukraine to announce an investigation into Joe Biden, who they perceived as the president's likely 2020 rival. As part of the effort, Giuliani sought to disparage the U.S. ambassador to Ukraine, Marie Yovanovitch, and eventually, Trump had her removed from office.

This piece of the puzzle, the Times reported Thursday, is key to the current investigation. One central question is whether Giuliani sought to have Yovanovitch removed while illegally working as a lobbyist for foreign interests, according to the report. These allegations aren't particularly new — they've been looming over Giuliani since the impeachment story first broke.

The United States attorney's office in Manhattan and the F.B.I. had sought for months to secure Justice Department approval to request search warrants for Mr. Giuliani's phones and electronic devices.
Under Mr. Trump, senior political appointees in the Justice Department repeatedly sought to block the warrants, The New York Times reported, slowing the investigation as it was gaining momentum last year. After Merrick B. Garland was confirmed as Mr. Biden's attorney general, the Justice Department lifted its objections.

And the search warrant for multiple electronic devices comes at an interesting time for Giuliani and Trump. Last year, prosecutors in New York tried multiple times to obtain approval from Justice Department officials in Washington for the search warrant, including in advance of the 2020 election, but did not receive it.

They ultimately did receive it at some point after Trump left office, and as a result of the delay, the seized material may include all sorts of records and communications that prosecutors might not have received if the warrants were approved earlier.

This looks on its face suspicious. Why was Biden's DOJ willing to approve search warrants on Giuliani, but Trump's DOJ — under his ally Barr, who he nominated specifically to protect himself — wasn't? Perhaps this question answers itself.

The Times report gestured at a possible answer, but it was unconvincing:

As the investigation into Mr. Giuliani heated up last summer, prosecutors and F.B.I. agents in Manhattan were preparing to seek search warrants for Mr. Giuliani's records related to his efforts to remove the ambassador, but they first had to notify Justice Department officials in Washington, according to people with knowledge of the matter.
Federal prosecutors must consult Justice Department officials in Washington about search warrants involving lawyers because of concerns that they might obtain confidential communications with clients. The proposed warrants for Mr. Giuliani were particularly sensitive because Mr. Trump was his most prominent client.
Career Justice Department officials in Washington largely supported the search warrants, but senior officials raised concerns that they would be issued too close to the election, the people with knowledge of the matter said.
Under longstanding practice, the Justice Department generally tries to avoid taking aggressive investigative actions within 60 days of an election if those actions could affect the outcome of the vote.
The prosecutors in Manhattan tried again after the election, but political appointees in Mr. Trump's Justice Department sought once more to block the warrants, the people with knowledge of the matter said. At the time, Mr. Trump was still contesting the election results in several states, a legal effort that Mr. Giuliani led, those officials noted. [emphasis added]

This only gives us more reason to think the Trump Justice Department was corruptly protecting the president's ally. And it's frankly perplexing that the Times include the bolded sentence above in the piece, given that Bill Barr was prominently insisting in 2020 that he did not believe the DOJ has a policy "to avoid taking aggressive investigative actions within 60 days of an election if those actions could affect the outcome of the vote."

Barr was clear that he thought the policy was narrower than that.

"The idea is you don't go after candidates," Barr said in a widely discussed interview. "You don't indict candidates or perhaps someone that's sufficiently close to a candidate, that it's essentially the same, you know, within a certain number of days before an election."

Perhaps Giuliani was "sufficiently close to" Trump, in Barr's view, to limit any investigatory steps, but Barr made clear he thought he had wide discretion. And Barr found exceptions when it was convenient for him. As ProPublica reported, the DOJ told prosecutors of a new "exception to the general non-interference with elections policy" the months before the 2020 election if they suspect election "fraud that involves postal workers or military employees." And the Justice Department announced an investigation of allegedly discarded ballots in September ahead of the. Bizarrely, the statement said that the nine ballots had been cast for Trump — an odd claim to include in such a release, and one that had to be subsequently corrected when it was realized only seven of the ballots were found to have been cast for Trump. Barr reportedly brought news of the investigation directly to Trump. Legal experts widely condemned the announcement as inappropriate, and no charges were brought in the case.

Barr was clearly willing to make up rules on an ad hoc basis to get the outcome he wanted around an election. He spoke endlessly of John Durham's probe into the origins of the Russia investigation, despite guidelines against such public disclosures, and he indicated strongly that he sought to release a report on the case, likely before the election — though it didn't live up to his hopes.

But even if it could be justified to block the Giuliani warrants before the election, it's ridiculous to suggest no overt steps could be taken against Giuliani after the election was over because he was part of the effort to contest the result. Such an instantiation of the policy is quite far afield of its purpose and prone to obvious abuses.

Of course, some Biden critics have made the opposite case, that Democrats and the current administration are going after Giuliani for political reasons and that it was Barr who was behaving appropriately. Fox News host Jesse Watters, for example, said of the raid on Giuliani: "Democrat prosecutors are waging political warfare for the benefit of the Democratic party just to purge Trump because he challenged the system." (There's no indication that the investigators in the case are predominantly Democrats.)

He added: "This is a thin predicate and everybody knows it."

These claims are far less plausible than the proposition that the Trump DOJ was protecting Giuliani. When asked about the raid, Biden said Thursday: "I made a pledge: I would not interfere in any way, order, or try to stop any investigation the Justice Department had, no way. I learned about that last night when the rest of the world learned about it, my word. I had no idea this was underway."

Trump, on the other hand, made no secret about his desire to direct the DOJ to investigate his enemies, he defended his right to do it, and he did so explicitly and in public many times.

Any DOJ approval of the Giuliani warrants would be overseen by Attorney General Merrick Garland, who has been widely respected across the board for years. He was confirmed by a vote of 70-30 by the Senate, winning the votes of 20 Republican senators, including Minority Leader Mitch McConnell. There's no indication that he's a rabid partisan.

And of course, Garland doesn't have the final say. An independent judge has to approve the warrant prosecutors are seeking. We don't know what evidence that judge saw, which is why it's so preposterous for Watters to claim we know the predicate for the investigation is "thin." Andrew Giuliani, Rudy's son, slammed the judge as an Obama appointee in comments on Thursday, but he provided no evidence that any other judge would've ruled differently. And even if the warrant wasn't approved under Bill Barr, the investigation itself still occurred under his leadership, making it even less persuasive to argue the whole case is a partisan witch hunt.