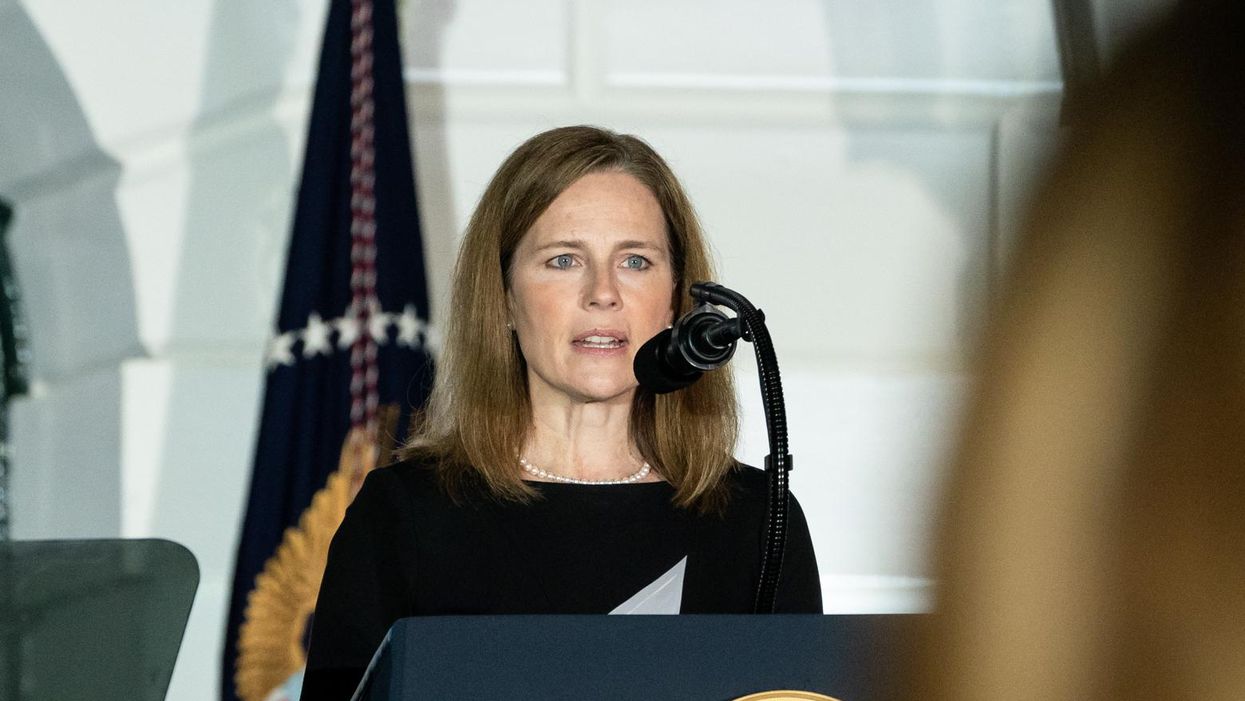 A perfect example of how much Justice Amy Coney Barrett has moved the U.S. Supreme Court even more to the right came late Friday night, when the High Court blocked California's pandemic-related ban on religious gatherings in private homes. The decision in Tandon v. Newsom was a 5-4 ruling, and Barrett was part of the majority in a case that might have had a different outcome if the late Justice Ruth Bader Ginsburg were still alive.

After Ginsburg's death in 2020, then-President Donald Trump nominated Barrett — and when the U.S. Supreme Court confirmed her, a liberal was replaced by a far-right social conservative along the lines of Justice Clarence Thomas and the late Justice Antonin Scalia. Barrett was expected to make socially conservative rulings, and she did that with her decision in Tandon v. Newsom.

Journalist Mark Joseph Stern, analyzing the ruling in Slate, explains, "Chief Justice John Roberts dissented, as did the three liberal justices, making Tandon yet another COVID decision in which Justice Amy Coney Barrett's vote made the difference. Although the conservative majority's decision was unsigned and ran just four pages long, it radically altered the law of religious liberty."

Stern goes on to explain why the Tandon ruling is a departure from the High Court's 1990 ruling in Employment Division v. Smith.

"Since 1990's Employment Division v. Smith, the Supreme Court has not interpreted the 1st Amendment's free exercise clause to require religious exemptions to laws that don't discriminate against religion," Stern notes. "In Tandon, however, the majority effectively overturned Smith by establishing a new rule, often called the 'most favored nation' theory. Under this doctrine, any secular exemption to a law automatically creates a claim for a religious exemption, vastly expanding the government's obligation to provide religious accommodations to countless regulations."

On the Monday following the Supreme Court's Tandon ruling, Stern discussed the decision with University of Texas School of Law Professor Steve Vladeck and Lewis and Clarke Law School Professor Jim Oleske — who told Stern, "Smith says the free exercise clause of the 1st Amendment protects against the government targeting religious practice for disfavored treatment, but does not grant a right to exemptions from general law. Almost immediately after Smith, there were efforts to read into it a broader 'most favored nation' theory that said: Any time the government grants an exemption to a law, it has an obligation to grant a religious exemption, too, unless the government meets strict scrutiny. But that was not the law of the land until Friday night."

Vladeck told Stern, "Friday night was the seventh time this term that the Supreme Court has issued an emergency injunction pending appeal. All seven were in COVID free-exercise cases…. Those who like these decisions are getting increasingly comfortable with the court flouting and defying its own internal standards and rules for this kind of relief simply because they like the result. In the process, they attack critics for being insufficiently sensitive to religious liberty. And that's a preposterous claim."