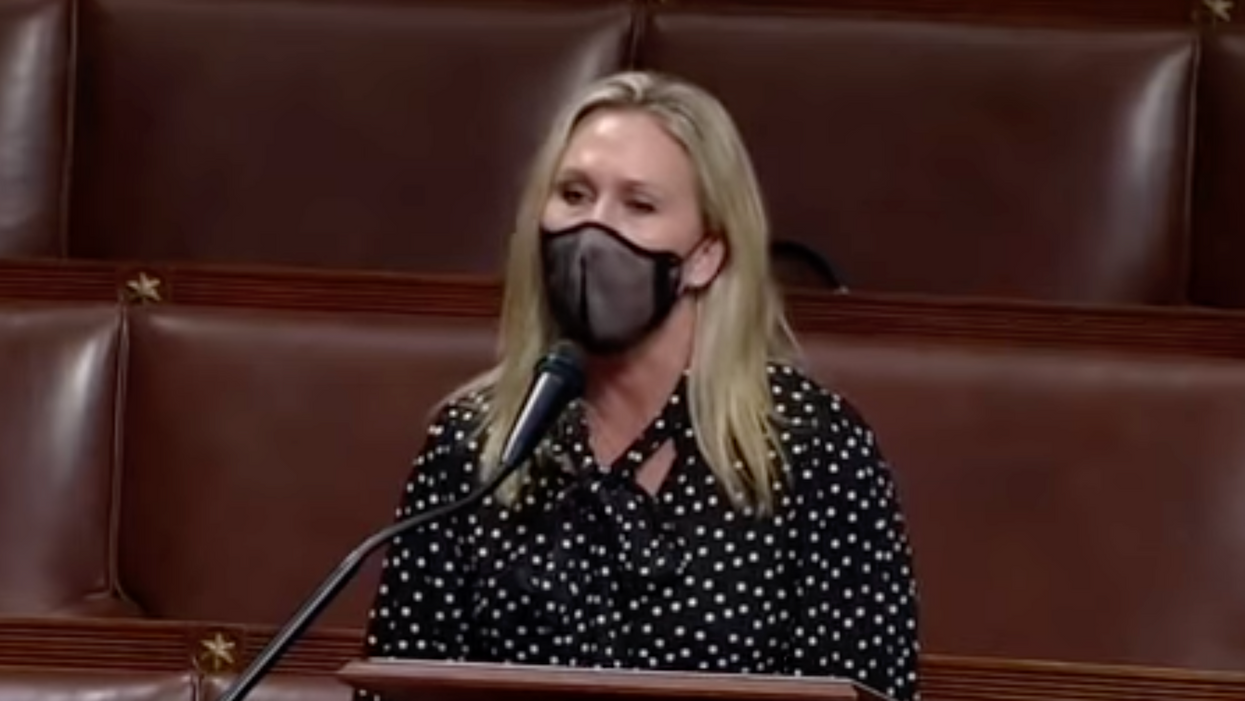 Marjorie Taylor Greene is characterizing vaccine passports as "Joe Biden's mark of the beast," so they must have some value. But we have to come up with a different name for them if we're going to get the conspiracy nuts…er…Republicans on board.

And that includes right-wing media. The headline in The Washington Post sums up today's health crisis: "The Dangerous Game [Fox News'] Tucker Carlson is Playing on Vaccines."

If our country is going to "open up" again in a way that preserves the lives and liberty of millions of Americans who've stayed virus-free so far, we're going to have to confront the GOP death cult, head-on. "Freedom" shouldn't mean the right to force other people to die all alone in a hospital ICU hooked up to breathing tubes.

Airlines, retail stores, restaurants and bars, workplaces, office buildings, colleges, stadiums, theaters, you-name-it — all will have to start exercising their Supreme Court-certified "right" to the "freedom" to prevent un-vaccinated people from entering their premises.

That sweet new Ad Council "It's Up To You" campaign won't be enough. Too many Republicans have taken in Donald Trump's lies and Qanon's bizarre conspiracy theories to be influenced by sweet pictures and nice words.

Fully 59% of registered Texas Republicans say they have "doubts," and about half of all Republicans in Congress — where the vaccine is, daily, freely and easily available on demand — have chosen not to get vaccinated.

America's venues have to kick some ass to save lives and rebuild our economy. It's going to take both the carrot and the stick.

I got my first vaccine passport in 1979 when I traveled to Kenya, Uganda and had an onward ticket to Somalia on behalf of the Salem international relief organization.

To get on a plane to those countries, and then to get through their own passport control, I had to prove that I was immunized against cholera, yellow fever and typhoid, as I recall, and there might of been a few others; I remember the shots hurt like hell and made me sick as a dog for a day or two.

But that yellow card, with the proof of vaccination stamps in it, periodically updated, sat inside my passport for the next 20 years and not only got me into multiple Third World countries on three continents, but also got me through US border stations and back into the United States from them.

The idea of vaccine passports is nothing new.

Although my kids didn't need them to get into school 40 years ago (the schools just took your word for it), my grandchildren do today. There's pretty much not a school or summer camp in America that'll let a kid in without proof of vaccination against, at least, measles and a few other childhood diseases.

Right now the Biden administration is reportedly working with 17 different organizations and private companies to come up with some sort of vaccine passport that'll work for America, which is apparently why Newsmax's White House Correspondent calls the idea "totalitarian communism."

Want to "own the cons"? Put photos on the passports and require states to allow them as voter ID. But, seriously…

IATA, the International Air Transport Association, which licensed the travel agency Louise and I owned in the 1980s and oversees international travel, is working on one, as is the office of World Tourism with the United Nations. IBM is developing a digital vaccine passport, and Clear, the company that speeds you through airport security lines, has already announced that they, too, will soon have one.

Israel rolled them out last month, and Denmark has announced they'll soon be doing the same.

The way to sell these freedom passports to right-wingers is pretty straightforward: tell them it's the free market, and that it has to do with religious liberty. They love those words even when they don't know what they mean.

These are the same people, of course, who want a business to refuse an LGBTQ person the freedom to patronize that company based on who they are or love. If conservatives believe an American business must legally be able make a decision like that, why shouldn't companies have the freedom to refuse service to someone who may be spreading a deadly disease?

Doesn't "freedom" include the freedom to stay alive in the midst of the worst pandemic in a century?

Freedom is a much misused word. How is it that anybody can say with a straight face that person "A" should have the "freedom" to refuse a vaccine or wear a mask and spread a deadly disease in the direction of person "B," but that person "B" shouldn't have the freedom to remain free of illness?

It's a good argument for calling them "Freedom Passports."

For that matter, vaccine passports are the ultimate statement of belief in the sanctity of human life.

It's truly bizarre that legislators in Arkansas and Texas think a woman who wants to get an abortion should go to prison or even get the death penalty, but if a red-state Republican wants to breathe a deadly disease in your face because they've joined an anti-mask, anti-vaccine cult, that's just fine.

Maybe we should call them "Right To Life Passports."

Crazed Republican conspiracy-mongers aside, the main international objection to vaccine passports comes from groups and organizations concerned about increasing the gap around the world between the haves and the have-nots. One billion people in the world don't even have proof of identity, much less a passport or birth certificate, and this would leave them even farther out of the loop.

On the other hand, those are not generally the folks trying to get into the Super Bowl, your local supermarket or wanting to sit next to you on a flight from Omaha to Cincinnati.

Back in the 1980s, restaurants around the country experimented with being all non-smoking, or having well-spaced smoking sections with separate ventilation. Restaurants today could do something similar.

The taco place down the street might only let you in with a vaccine passport, a modern-day variation on the "no shoes, no shirt, no service" slogan. Farther down the block, the burger joint may opt to ignore the passports and run at 1/3 capacity or even throw caution to the wind and pack the place in.

Nobody, at least so far, is arguing passports should be required by the gummint the way those communist driver's licenses are issued and required to speed down the highway. Although I disagree with President Biden on this issue, it looks like it's going to be entirely up to the "free market."

The NFL has already weighed in, promoting vaccination among their fans so people can show up knowing that Covid isn't floating around inside the stadium.

Meanwhile, Florida's Republican Governor Ron DeSantis, arguably responsible for thousands of unnecessary deaths (that he appears to be hiding), is swearing that he'll never allow a private business in his state to require a vaccine passport for service.

He's fine with Florida businesses refusing to do business with LGBTQ folks, but Republican cult members who refuse to get vaccinated because they're convinced Bill Gates is gonna chip them so they can be tracked? No way! (Don't tell them about that GPS thing in their cell phones, please; they may not be able to handle it.)

As Republican politicians, judges and lawyers constantly repeat, private business should be able to refuse service to people on their "deeply held beliefs." This one's gone all the way up to the Supreme Court, and repeatedly gotten the Republican seal of approval.

And, even for them, Freedom Passports could encompass it all: Freedom! America! The Free Market! Saving innocent lives!

Thom Hartmann is a talk-show host and the author of The Hidden History of American Oligarchy and more than 30 other books in print. He is a writing fellow at the Independent Media Institute and his writings are archived at hartmannreport.com.