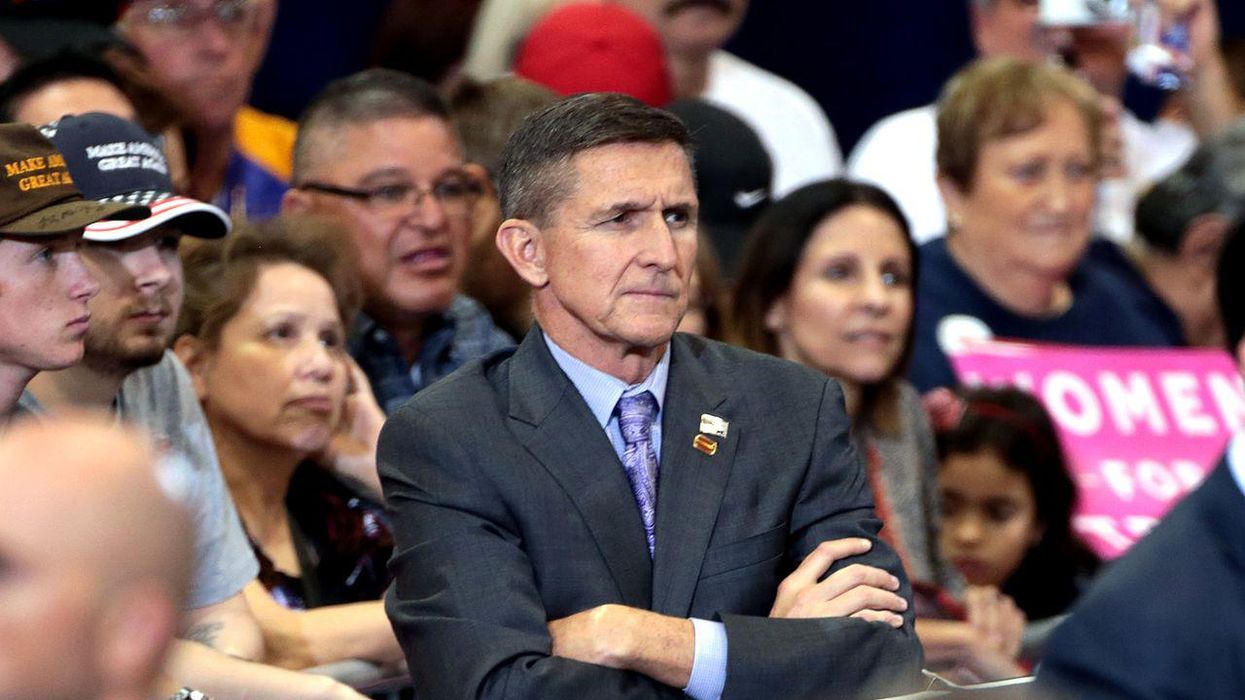 Former National Security Adviser Michael Flynn is among the many allies of Donald Trump who faced criminal charges and was granted a presidential pardon while the former president was still in the White House. Flynn's foreign interactions were a major source of controversy during the Trump years, and according to Guardian reporter Murray Waas, Flynn was warned about accepting foreign money even before Trump was elected president in 2016.

The office of the U.S. Defense Department's inspector general, Waas reports, "has uncovered evidence that Michael Flynn accepted hundreds of thousands of dollars from foreign interests and governments, despite repeated warnings by the DoD and the Justice Department that his conduct might be illegal."

In 2017, Flynn pleaded guilty to lying to the FBI during its investigation of Russian interference in the 2016 presidential election. But Trump defended Flynn vigorously, claiming that his former national security adviser was a victim of political persecution from "the deep state."

"While pleading guilty in 2017," Waas explains, "Flynn also admitted to committing another crime: related to his acceptance of hundreds of thousands of dollars from the government of Turkey without registering with the Justice Department as an agent of a foreign government, which was required by law. Now, according to people familiar with the confidential findings of the recently completed IG investigation, The Guardian can reveal Flynn was warned years earlier that his acceptance of foreign money and his not registering as a foreign agent likely would be illegal."

Waas adds, "Moreover, Flynn's conduct occurred while he was a private citizen, long before Trump became president. Taken together, this appears to constitute powerful new evidence discrediting Trump and Flynn's claims of political persecution by those opposed to Trump's agenda."

Trump launched his 2016 presidential campaign in 2015, and according to Waas' reporting, Flynn was first warned about accepting foreign money in 2014. Flynn resigned as director of the Defense Intelligence Agency in August 2014.

"The new disclosures portray how a former military officer, despite his training to obey rules and orders, was instead driven by personal profit to break the law," Waas reports. "The Defense Intelligence Agency first warned Flynn, in an 8 October, 2014 letter, that his acceptance of foreign money might be a potential violation of federal law, as well as the Emoluments Clause of the U.S. Constitution, which similarly prohibits such foreign payments to government officials." In that letter, the DIA warned Flynn, "The Emoluments Clause.… as interpreted in Comptroller General opinions, and by the Department of Justice of Office of Legal Counsel, prohibits receipt of consulting fees, gifts, travel expenses, honoraria, or salary by all retired military personnel" from foreign interests.

Flynn received another warning on November 30, 2016 — this time, from the U.S. Department of Justice. At issue was his work for a lobbyist for the government of Turkish President Recep Tayyip Erdogan, an authoritarian who has gone to great lengths to undermine the system of checks and balances in what was once one of the more democratic countries in the Middle East. Flynn, according to Waas, was warned that he might be violating the Foreign Agents Registration Act of 1938.

But despite that "warning not to take foreign money," Waas notes, Flynn "still accepted $45,000 from RT — a Kremlin-controlled media organization described by…. intelligence agencies as the 'Kremlin's principal international propaganda outlet' — $22,000 from other Russian interests, and $530,000 to serve as a lobbyist for Turkey. And despite the warning from the Justice Department, Flynn did not comply with the FARA statute."

Clark Cunningham, a professor at the Georgia State University College of Law and expert on the U.S. Constitution's Emoluments Clause, told The Guardian, "There is little doubt that money received by Flynn to lobby on behalf of the Turkish government or to promote Russian interests would be considered emoluments."