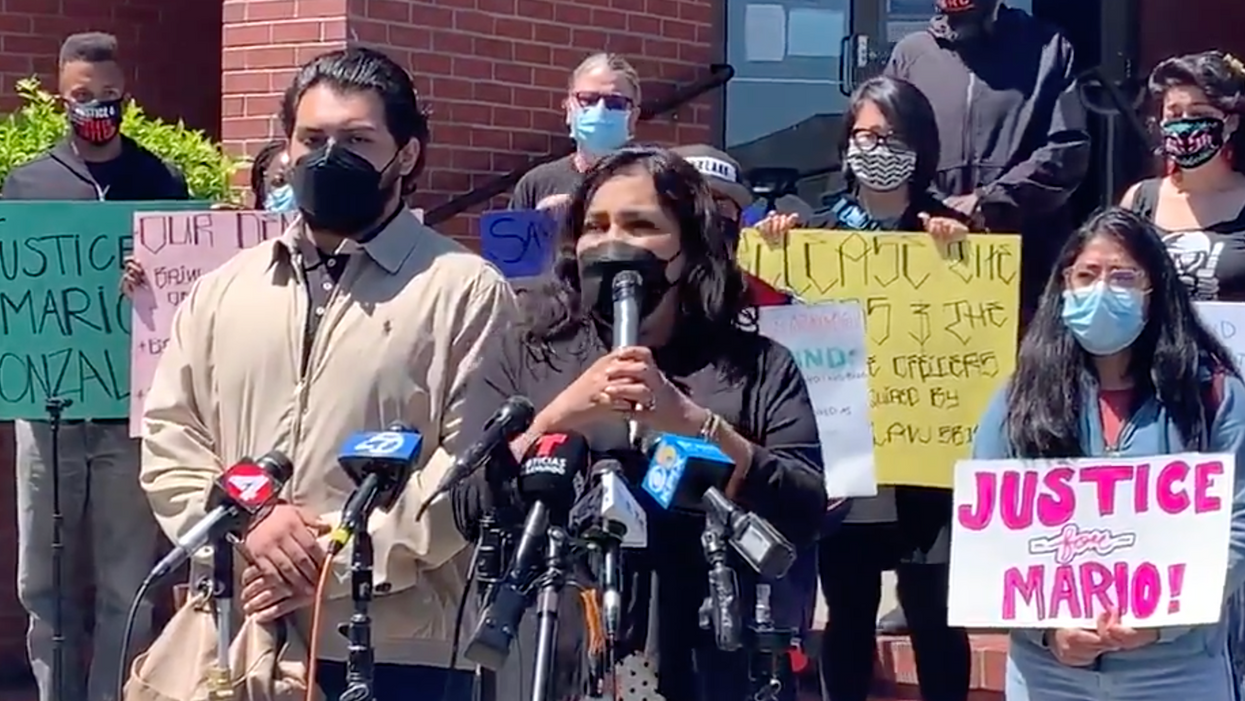 The family of a 26-year-old man, Mario Gonzalez, is demanding an independent investigation into the California man's death following the release Tuesday of body camera footage by the Alameda Police Department which shows three officers kneeling on his back and shoulders for nearly five minutes before he loses consciousness—differing from the account given by the department earlier this month.

Gonzalez, who was the father of a four-year-old son and the caretaker of an adult family member with autism, was killed "in the same manner that [former Minneapolis police officer Derek Chauvin] killed George Floyd," said his brother at a press conference Tuesday.

"Alameda police officers murdered my brother Mario," Gerardo Gonzalez said to a crowd of about 50 people, some of whom held signs reading, "Justice 4 Mario."

The footage shows Gonzalez standing alone in a park near two Walgreens shopping baskets on April 19—the day before Chauvin was found guilty of murdering Floyd last spring.

The body camera footage can be viewed below. [Warning: the contents of the video are graphic and may be disturbing to some viewers.]

According to the New York Times, three officers—Eric McKinley, Cameron Leahy, and James Fisher—arrived in the park after two people called 911 to report that Gonzalez was "loitering" and "talking to himself" near a fence.

In the video, the officers speak to Gonzalez for about nine minutes before trying to secure his hands behind his back.

The officers are shown pushing Gonzalez to the ground and handcuffing him before they kneel on his legs, shoulder, and back. Gonzalez struggles to respond to the officers' questions about his identity, and at one point appears to say, "Please don't do it."

The officers briefly discuss rolling Gonzalez onto his side—a position which, according to expert testimony this month at the Chauvin trial, is safer for arrestees than the prone position because it doesn't impair breathing—but only do so after he has become unresponsive. An officer later says Gonzalez has "no pulse."

The body camera footage can be viewed on YouTube.

One officer says, "He went from combative to non-responsive almost immediately," though Gonzalez is never seen being violent toward the police.

"At no point was he violent," Gerardo Gonzalez said Tuesday. "The footage shows officers on top of Mario while he was face down on the ground. They had their weight on his head and his back. He was complying and they continued to bring him down with their weight. Everything we saw in that video was unnecessary and unprofessional, and it took a minuscule event and made it fatal."

In its account of Gonzalez's arrest and death, the Alameda Police Department claimed Gonzalez died in a hospital after his arrest, but in the video he appears to lose consciousness and his pulse at the scene. The police also made no mention of kneeling on his back during the arrest, and said in the official report of the arrest that Gonzalez died following a "medical emergency."

Last May, Minneapolis police filed a report stating Floyd had died after a "medical incident" and made no mention of Chauvin kneeling on his neck for nearly nine minutes.

Gonzalez's mother, Edith Arenales, condemned the police officers, who have been placed on paid leave, at the family's press conference.

"They broke my family for no reason," Arenales said.

In response to recent police killings of Black and Latino Americans in recent months, some civil rights advocates have called for drastic changes to policing across the country, including redirecting police funds to efforts that would allow mental health specialists to respond to calls like those that were made about Gonzalez.

"Defund is about taking money out of bloated police budgets and putting that into the community in the form of resources, programs and supports," Cat Brooks, a community activist in Alameda who leads the Anti Police-Terror Project, said Tuesday. "And it's about not calling the cops anymore when there's a mental-health crisis. ... It's about not calling the cops when someone is in the middle of a substance-abuse crisis. We got folks that can handle that."

Gerardo Gonzalez added that "there was no reason to detain" his brother, "let alone kill him."

"They could have asked him to call his family and we would have come and picked him up," he said.