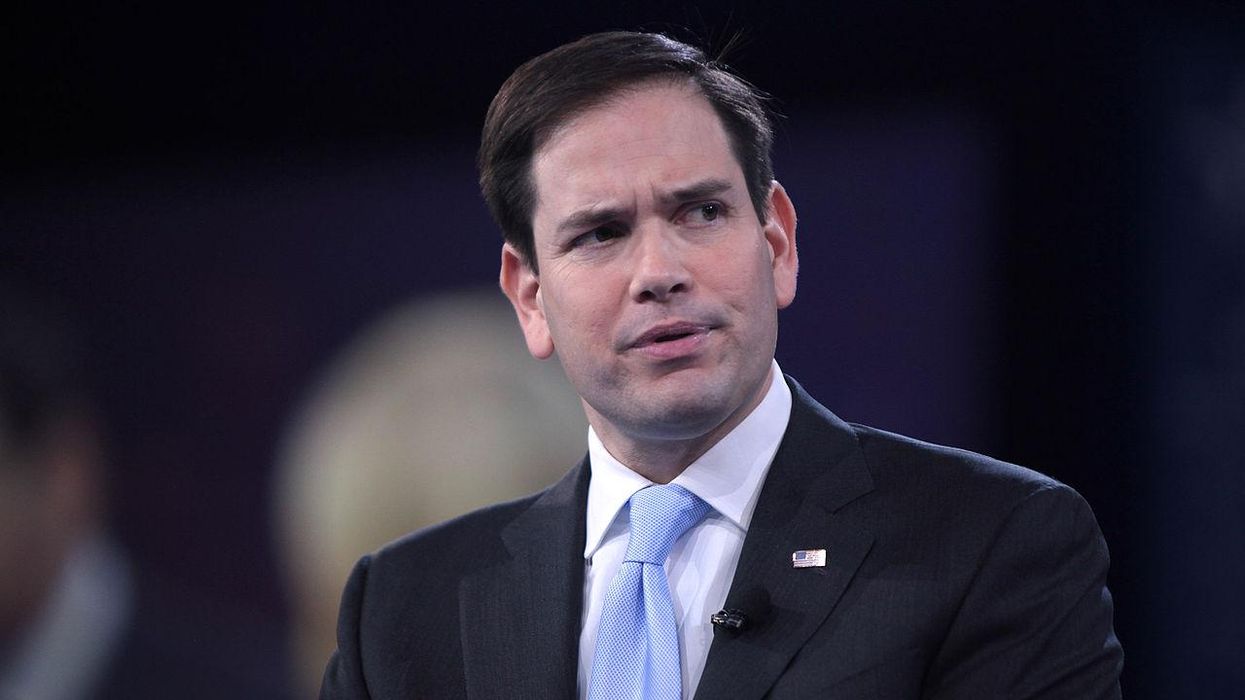 After decades of bowing down to large corporations, prominent Republicans like Sen. Marco Rubio of Florida, Sen. Ted Cruz of Texas and Rep. Jim Jordan of Ohio are now attacking corporate America for coming out against the suppression bills that have come from state legislatures in Georgia, Texas, Arizona and many other states. Rubio angrily attacked "woke" corporations in an op-ed published by the New York Post on April 25. And liberal New York Times columnist Michelle Goldberg slams the Florida senator's empty posturing in her April 27 column.

In his op-ed, Rubio wrote that large corporations need to be called out for "bending a knee to woke progressive craziness." According to Rubio, "Corporate America eagerly dumps woke, toxic nonsense into our culture, and it's only gotten more destructive with time."

Goldberg, in response, writes, "This analogy is slightly confusing, because usually, corporate polluters should expect no pushback whatsoever from Republicans. But Rubio wants us to assume that his party thinks dumping toxic waste is bad."

The Times columnist goes on to say that Rubio's posturing is meaningless in light of how much Republicans have kowtowed to Corporate America.

Goldberg explains, "If Republicans actually wanted to scare corporations into quiescence on social issues, they have a bunch of policy options. They could, for example, support President Joe Biden's plan to increase the corporate tax rate to 28% from 21% to help fund infrastructure. It was 35% before Donald Trump's tax cuts. But Rubio's not going to do that: He described Biden's corporate tax proposal as part of 'a radical agenda full of left-wing priorities.' When Senate Republicans unveiled their counterproposal on infrastructure, it called for 'protecting against any corporate or international tax increases.'"

During the 2016 GOP presidential primary, Rubio was a blistering critic of Donald Trump. But after Trump won the primary and the general election, Rubio — not unlike Cruz and Sen. Lindsey Graham of South Carolina — flip-flopped and became much more Trumpian rhetorically. And the empty anti-corporate rhetoric in his Post op-ed is full of Trump-like pseudo-populism.

According to Goldberg, "Rubio is following a model pioneered by Trump: rail against big corporations, occasionally bully those that defy you, but ultimately, put their profits and influence first."

Goldberg points out that Rubio has no problem with corporations until they embrace "cultural liberalism" in some respect.

"Last month," Goldberg observes, "Rubio did support the union drive by some Amazon workers in Bessemer, Alabama, framing it explicitly as payback for Amazon's cultural liberalism. 'If Amazon thinks that conservatives will automatically rally to do its bidding after proving itself to be such enthusiastic culture warriors, it is sorely mistaken,' he wrote in a USA Today essay. But the union drive, which Amazon opposed ferociously, failed, and Rubio isn't willing to back the kind of legislation that would make unionization easier…. The most Rubio is willing to do is to make a temporary rhetorical alliance with workers driven by spite."

Goldberg discussed her column during an April 28 appearance on MSNBC's "Morning Joe," slamming Rubio once again for being hypocritical in his "sudden" disdain for Corporate America and described his rhetoric as "toothless."

The Times columnist told hosts Joe Scarborough and Mika Brzezinski and guest Willie Geist, "I think it's prompted by Georgia and other instances where corporations have criticized right-wing legislation…. He's not talking about esoteric language policing. He's not talking about human resources fads that some people object to; when he talks about wokeness, he's talking about voting rights. And he is really, really angry that companies, after all the deference that they've been given by the Republican Party, would intervene in political issues on the side of Democrats."