In 'paradigm shift,' Manhattan DA will no longer prosecute prostitution 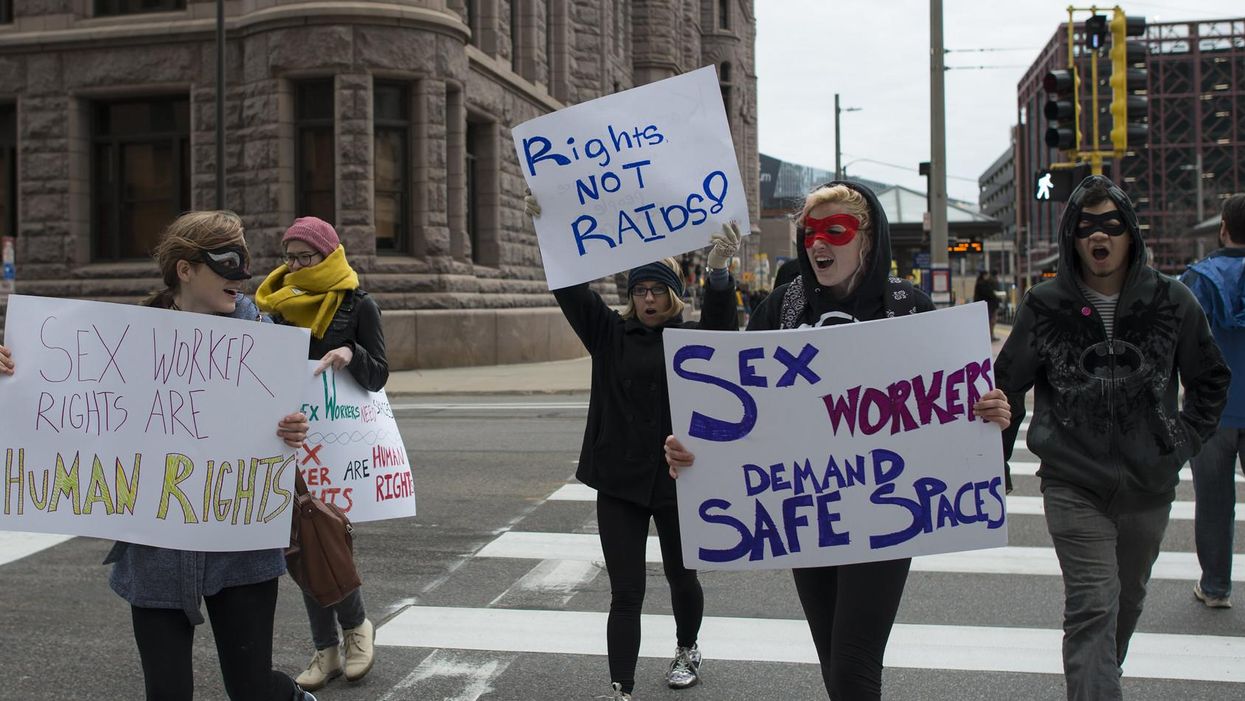 Minneapolis, Minnesota - October 25, 2016 - Sex Workers and their supporters gathered in Minneapolis to protest the recent raid and arrests at Backpage. Protesters say sites like Backpage.com allow them to work independently to screen clients and shutting them down exposes them to more risk. Credit: Fibonacci Blue
Andrea Germanos
and
Common Dreams
April 22, 2021

The Manhattan district attorney's office in New York announced Wednesday what it called a "paradigm shift" by saying it will no longer prosecute prostitution and unlicensed massage.

"Over the last decade we've learned from those with lived experience, and from our own experience on the ground: criminally prosecuting prostitution does not make us safer, and too often, achieves the opposite result by further marginalizing vulnerable New Yorkers," District Attorney Cy Vance said in a statement. "For years, rather than seeking criminal convictions, my office has reformed its practice to offer services to individuals arrested for prostitution. Now, we will decline to prosecute these arrests outright, providing services and supports solely on a voluntary basis."

At a virtual court appearance, Vance said his office was dismissing 914 prostitution and "unlicensed massage" cases to reflect the new policy.

His office is also dismissing over 5,000 "loitering for the purpose of prostitution" cases. State lawmakers in February repealed the law that criminalized such loitering. Dubbed the "walking while trans" law, its critics say (pdf) the law was used to targt BIPOC and transgender communities.

"By vacating warrants, dismissing cases, and erasing convictions for these charges, we are completing a paradigm shift in our approach," Vance said, pointing the fact that many cases go back to the 1970s and 1980s.

Vance added that reforms would not have been possible "without the tireless work of dedicated individuals who changed not only our laws, but law enforcement's understanding of their lived experiences."

The move in New York follows similar steps already taken by other cities, as the New York Times noted:

Manhattan will join Baltimore, Philadelphia, and other jurisdictions that have declined to prosecute sex workers. Brooklyn also does not prosecute people arrested for prostitution, but instead refers them to social services before they are compelled to appear in court—unless the district attorney's office there is unable to reach them.

Abigail Swenstein, staff attorney with The Legal Aid Society's Exploitation Intervention Project, welcomed the development. "Countless sex workers, those profiled as sex workers, and trafficking victims have suffered under the weight of convictions and warrants," she said. "These perpetual punishments extend into family and immigration court, and impact our clients' ability to find stability through housing and employment."

"However," Swenstein added, "today's announcement should not supplant the need to pass legislation that would fully decriminalize sex work and provide for criminal record relief for people convicted of prostitution offense." She called on lawmakers to pass the Stop Violence in the Sex Trades Act, S6419, which would decriminalize sex work.

An analysis released in October by the ACLU provides evidence for that legislation, finding that full decriminalization of sex work better supported such workers' safety, health, and economic well-being compared to more restrictive and punitive approaches.

"Right now, millions of people are asking what we can do to reduce abuse by law enforcement, racial disparities in our criminal justice system, and our overall jail and prison populations," LaLa Zannell, the ACLU's Trans Justice campaign manager, said at the time.

"One policy that can achieve all of these goals—particularly for Black trans women and immigrants—is to recognize that sex work is work and treat it like any other industry," said Zannell. "Sex workers have been saying they face significant violence from police and clients for decades and it is time that we all listen to these voices when determining how to improve safety for sex workers."