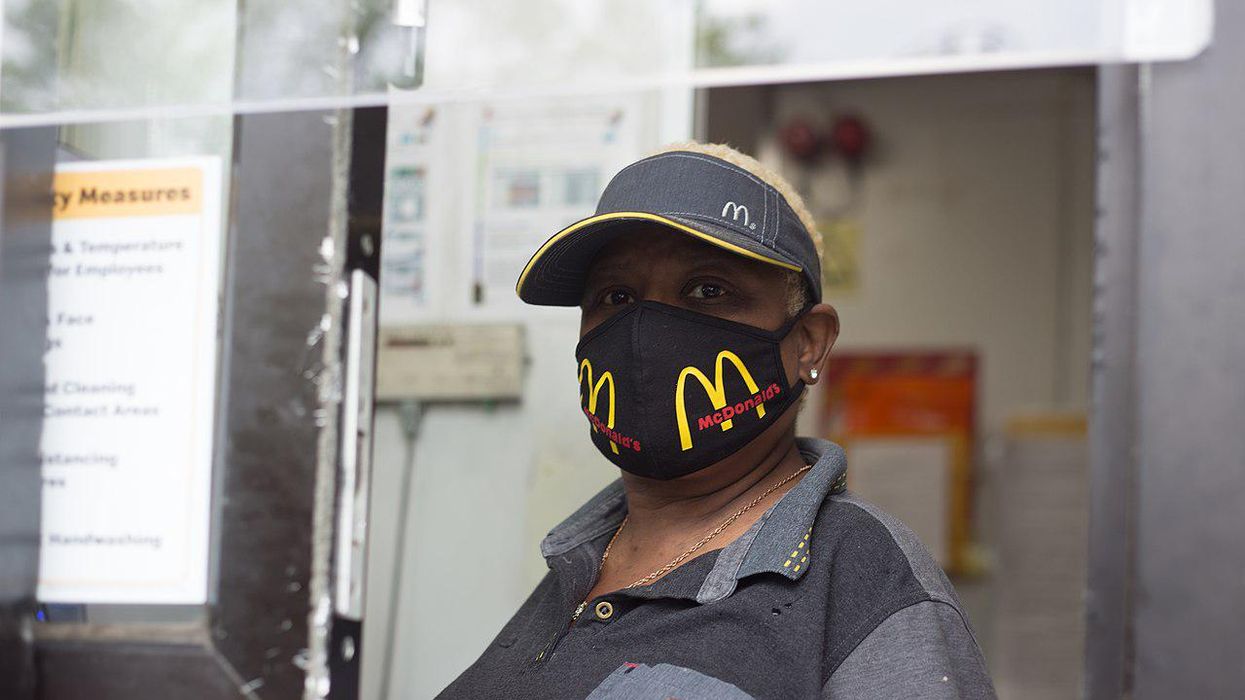 A McDonald's employee in May 2020 during the coronavirus pandemic, Paul Sableman
Alex Henderson
April 23, 2021

Conservatives and libertarians have often insisted that minimum-wage service workers are not underpaid — that if they had the skills of computer programmers, attorneys or cardiologists, they would be able to command higher wages. But during the COVID-19 pandemic, Americans who work for low wages cleaning floors in medical buildings or working at the checkout register in dollar stores have been described as "essential" workers by state and local governments. The horrors of the COVID-19 pandemic — which, according to Johns Hopkins University in Baltimore, has killed more than 3 million people worldwide — have dramatically underscored the importance of the jobs they perform. And journalist Annie Lowrey, in a thought-provoking article published by The Atlantic on April 23, argues that there is no such thing as a "low-skill" worker and that the very concept is fundamentally flawed.

Lowrey explains, "Being a prep cook is hard, low-wage and essential work, as the past year has so horribly proved. It is also a 'low-skill' job held by 'low-skill workers,' at least in the eyes of many policy makers and business leaders, who argue that the American workforce has a 'skills gap' or 'skills mismatch' problem that has been exacerbated by the pandemic. Millions need to 'upskill' to compete in the 21st Century, or so say the New York Times and the Boston Consulting Group, among others. Those are ubiquitous arguments in elite policy conversations. They are also deeply problematic."

The journalist adds that the term "low-skill" is frequently used in a "derogatory" way that "positions American workers as being the problem, rather than American labor standards, racism and sexism, and social and educational infrastructure."

"It is a cancerous little phrase, low-skill," Lowrey argues. "As the pandemic ends and the economy reopens, we need to leave it behind."

"Imagine going up to a person who's stocking shelves in a grocery store and telling him that he is low-skill and holding the economy back," Lowrey writes. "Imagine seeing a group of nannies and blasting 'Learn to code!' at them as life advice. The low-skill label flattens workers to a single attribute, ignoring the capacities they have and devaluing the work they do. It pathologizes them, portraying low-skill workers as a problem to be fixed, 'My Fair Lady'–style."

Lowrey goes on to say, "Many 'low-skill jobs' held by 'low-skill workers' are anything but. Many of these are difficult, physically and emotionally taxing jobs that, in fact, require employees to develop extraordinary skills, if not ones you learn at medical school or MIT. A great deal of skill is necessary to wash a lunch rush's worth of dishes. A great deal of skill is required to change the clothes of an immobilized senior who might not want to have her clothes changed, or to wrangle a class of toddlers, or to clean up an overgrown yard at breakneck pace, or to handle five tables of drunk guys who want their wings yesterday."

Arguments similar to the ones made in Lowrey's article were made by progressive Rep. Alexandria Ocasio-Cortez of New York City in a pre-pandemic tweet she posted on July 30, 2019. Republicans, for all of former President Donald Trump's pseudo-populism, love to sneer at AOC for having once been a bartender — and she called them out for it:

With more than half of U.S. residents having been at least partially vaccinated for COVID-19, millions of Americans are hoping and praying that the pandemic will end sooner rather than later. Lowrey worries that when life in the U.S. starts to get back to some degree of "normal," Americans will forget how important and necessary many low-paying jobs are.

"The pandemic has helped us recategorize many 'low-skill' jobs as 'essential' jobs — jobs integral to the functioning of the economy, but whose importance so often does not translate into fair pay and good benefits," Lowrey stresses. "But I fear we are losing that paradigm shift as the world normalizes again. Cashiers and receptionists and delivery drivers and parents' helpers will once again be seen as economic deadweight, not vital economic utilities."