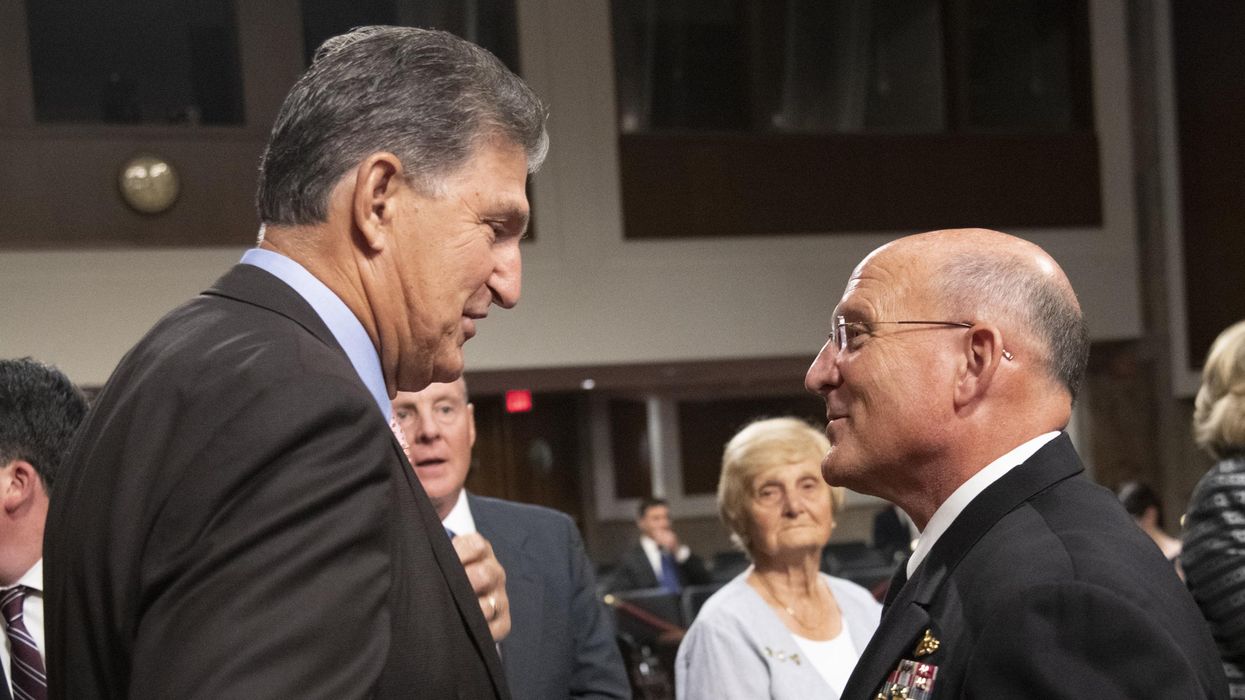 Those of us who've been watching politics for a while knew that the 50-50 Senate was going to be a challenge for the Biden administration. Yes, it's much, much better to have the majority and be able to set the agenda. But passing legislation with such a narrow margin is always very difficult. It's usually worse for Democrats because the small, conservative, rural state advantage in the US Senate makes it impossible to gain a majority without at least a few right-leaning showboaters who feel the need to demonstrate their "independence" from the libs who dominate the party.

Republicans have their "moderates" too, as we know, but generally, Democrats have a much more difficult task in these situations because they are actually trying to accomplish something rather than simply confirm judges, cut taxes and pretend to repeal popular legislation over and over again. Even when Democrats hold a large majority, the conservative senators in the caucus seem to always flex their muscles and make passing popular initiatives very difficult.

When Jimmy Carter was president and had a 57 vote majority in the Senate, his signature legislation was thwarted by Democrats who watered it down to almost nothing, stymying Carter's big initiative for the U.S. to attain energy independence. In 1993, when President Bill Clinton became the first Democratic president in 12 years, also with a 57 vote margin, the Democrats tried once again to raise taxes on the wealthy and pass a broad-based energy tax, this time in the name of "deficit reduction," and it was fought tooth and nail by different Democrats representing the same interests. Karen Tumulty writing for the LA Times back in 1993, wrote about the reaction of two Democratic senators, Oklahoma's David Boren and Louisiana's John Breaux, to Clinton's plan:

Sen. David L. Boren will happily admit to being the biggest thorn in President Clinton's right side. "Right now," he says, "I am perfectly at peace with my position." By virtue of his seat on the Senate Finance Committee, the Oklahoma Democrat holds the vote that could kill Clinton's economic program, and he believes he can use his extraordinary leverage to help redirect a presidency that has veered badly off course.
Also on the panel is Sen. John B. Breaux (D-La.), Clinton's longtime political ally and one of the earliest backers of his presidential campaign. He, too, has served notice that he will not support the plan unless it undergoes major revisions. Both senators insisted in interviews this week that their struggle goes far beyond their objections to an energy tax that could hurt industries in their states. They see it as nothing less than a war with the left for the soul of Bill Clinton's presidency.

Does that sound at all familiar?

Fast forward 16 years to President Barack Obama, who also enjoyed a large Democratic majority in the Senate. I'm sure we all recall the drama surrounding the passage of the Affordable Care Act. Not one Republican voted for it and the negotiations among Democrats were brutal with Senator Joe Lieberman, I-CT, successfully nixing the public option and Democratic members of the House holding up the bill over its provisions to provide abortion coverage. In the end, the Democrats passed the bill but lost 33 House Democrats and Sens. Blanche Lincoln, D-AR, Ben Nelson, D-NE and Mark Pryor, D-AR.

The point is that unless there is an emergency, "bipartisanship" on major legislation has been a pipe dream for a very long time. The political establishment harps on it like it's the norm but with the exception of some early bipartisan victories in the Reagan era, it hasn't been true for more than 40 years.

That brings us to Senator Joe Manchin, D-WV, the man of the hour.

Every political observer in the country has been waiting with bated breath to see which way the wind is blowing with him because he is the most conservative Democrat in the 50-50 Senate and he has made it clear that he has no compunction about dictating what the Biden administration will be allowed to accomplish legislatively. Theoretically, any senator could have this power and there have been rumblings from Arizona Senator Kyrsten Sinema and a few others, but Manchin is the man in the spotlight. Whether it's to provide the 50th vote to reform the filibuster or provide the 50th vote to pass a bill using reconciliation, it appears that he will be the decider in this congress.

This is not good news. He recently told Arthur Delaney of the Huffington Post that he believes congressional voting reform efforts in Congress should be designed to make Trump voters happy:

"The only thing I would caution anybody and everybody about is that we had an insurrection on January 6, because of voting, right? And lack of trust in voting? We should not, at all, attempt to do anything that would create more distrust and division."

Actually, we had an insurrection because the president propagated a Big Lie and incited his followers to storm the U.S. Capitol. I'm pretty sure that the only thing that would appease those people would be to remove Joe Biden from the White House and install Donald Trump. But Manchin, who told CNN, "January 6 changed me," seems to think insurrectionists are simply seeking bipartisan comity:

"So, something told me, 'Wait a minute. Pause. Hit the pause button.' Something's wrong. You can't have this many people split to where they want to go to war with each other."

I think it's fair to say that Manchin has somehow absorbed the circular GOP's talking points justifying their flurry of legislation to restrict voting all over the country in order to "restore trust in the system" after Trump lied about the election being stolen from him. Can Manchin be so naive that he doesn't know that this was on the GOP agenda long before Trump came down that escalator?

As with every Diva Democrat I mentioned in the fraught negotiations above, the big question always is, "what do they really want?" Is he posturing his mavericky independence image for the folks back home? Does he have a specific policy goal that he's negotiating for? Is he playing some multi-dimensional game in which he is acting as though he's demanding concessions from the Democrats but actually is forcing the GOP to demonstrate their obstruction so he can say he tried before voting with his party? Or does he believe the drivel he spouts about bipartisanship and just loves all the attention?

We really don't know. But it's always simplest to just take a politician at his word in cases like this and that would mean the op-ed he wrote for the Washington Post on Thursday is very bad news for the Democrats. In it, Manchin declared unequivocally:

There is no circumstance in which I will vote to eliminate or weaken the filibuster. The time has come to end these political games, and to usher a new era of bipartisanship where we find common ground on the major policy debates facing our nation.

It is very hard to see how he backs off from a Shermanesque statement like that and if he doesn't we are looking at total gridlock for the next two years and a probable wipe-out of the Democratic majorities in 2022.

Mitch McConnell has made it clear time and again that his philosophy in opposition is to block everything and then blame the Democrats for failing to get anything done. He has not changed his mind. Sure, they will pretend they want to negotiate but there will never be 10 Republicans willing to break a filibuster to pass major legislation under a Democratic majority. It's been completely unrealistic to expect that for the past 40 years. That Joe Machin thinks it is possible with the Trumpified GOP is downright delusional.