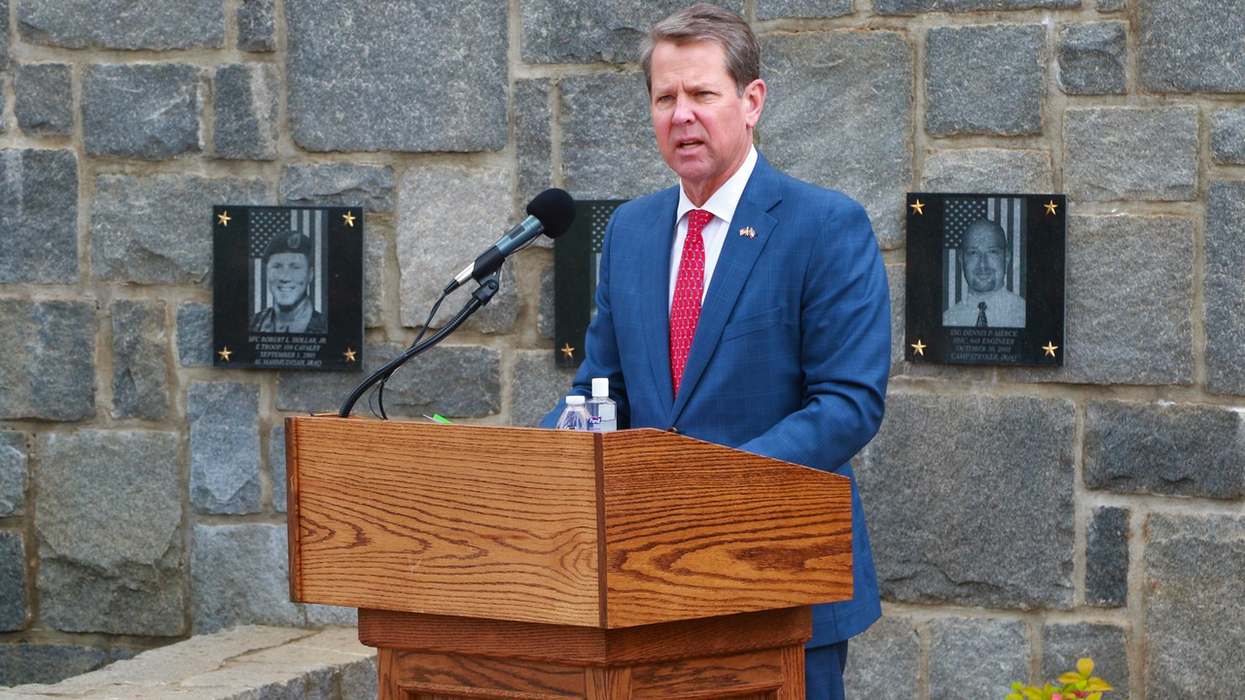 Brian Kemp, the Governor of Georgia, speaks during a virtual Memorial Day ceremony at Clay National Guard Center in Marietta, Georgia on May 21, 2020. Governor Kemp spoke of the ultimate sacrifice that fallen Georgia Guardsmen have made while fighting for the freedoms all Americans possess today.U.S. Army National Guard photo by Capt. Bryant Wine
Jeff Singer
and
DailyKos
April 18, 2021

Jones used his kickoff Friday to once again repeat the lie that Trump would still be in the White House if Jones had been governor in 2020. Joe Biden, of course, would still have earned an electoral college majority if Trump had carried Georgia, but that's hardly stopped Trump from targeting his one-time ally Kemp for refusing to go along with his efforts to try and steal the state's electoral votes.

That hasn't changed in the last month even though Kemp has attracted plenty of gratitude in conservative circles for signing the new voter suppression bill, a development that led Major League Baseball to move the All-Star Game from the Atlanta suburbs to Colorado. Trump instead responded earlier this month by labeling the new law "far too weak and soft" and claiming, "Kemp also caved to the radical left-wing woke mob who threatened to call him racist if he got rid of weekend voting."

Jones, as we'll discuss, has been an ardent Trumpest throughout the last year, but Kemp is already trying to make his Democratic past a liability. The incumbent's team greeted Jones' arrival into the race by noting that the then-Democrat opposed a 2019 bill that effectively banned abortion just six weeks into a pregnancy, legislation that has since been struck down by a federal court. Jones, who agreed during his 2008 U.S. Senate campaign that abortion should be legal, tried to get ahead of Kemp's attacks by tweeting on Monday, "Life begins at conception - period."

The governor may also have plenty of other material to work with from Jones' long time in Democratic politics, a career that was defined by several failed attempts to win higher office. After a stint in the state House in the 1990s, Jones became the first African American to lead DeKalb County following his 2000 victory for CEO of this large Atlanta-area community. The Atlanta Journal-Constitution writes that during his tenure, he "drew intense scrutiny for angry outbursts and an accusation of rape that he said was a consensual act between three partners." Jones, however, was never charged.

Jones, who had voted for George W. Bush twice, tried to use his high-profile post as a springboard to statewide office by seeking Team Blue's nomination to take on Republican Sen. Saxby Chambliss in 2008. However, the CEO earned plenty of negative attention during the nomination contest after Barack Obama took him to task for creating a mailer that made it appear that the two were campaigning together. Jones lost the primary runoff 60-40 to Jim Martin, who went on to lose to Chambliss.

Jones then challenged Rep. Hank Johnson in the 2010 primary for the 4th Congressional District and lost 55-26. In 2013, a grand jury probing his time leading DeKalb County recommended he be investigated for what the AJC calls allegations of "bid-rigging and theft." The following year, his campaign for county sheriff ended in a landslide 76-24 primary defeat.

Jones, though, resurrected his political career when he won the 2016 primary to return to the state House in a safely blue seat. Months later, DeKalb District Attorney Robert James announced that he wouldn't be charging a number of figures, including Jones, for lack of evidence.

Jones spent the next few years often voting with Republicans and tweeting favorably of Trump, but he only burned his last bridges with his party in 2020 when he endorsed Trump's re-election campaign. The state representative, who was already facing a competitive primary, ultimately retired from the legislature (albeit after initially saying he'd be resigning), and he spent the rest of the campaign as a prominent Trump surrogate. Jones spent his time after Election Day headlining Trump rallies alleging nonexistent voter fraud, and he finally switched parties in January.