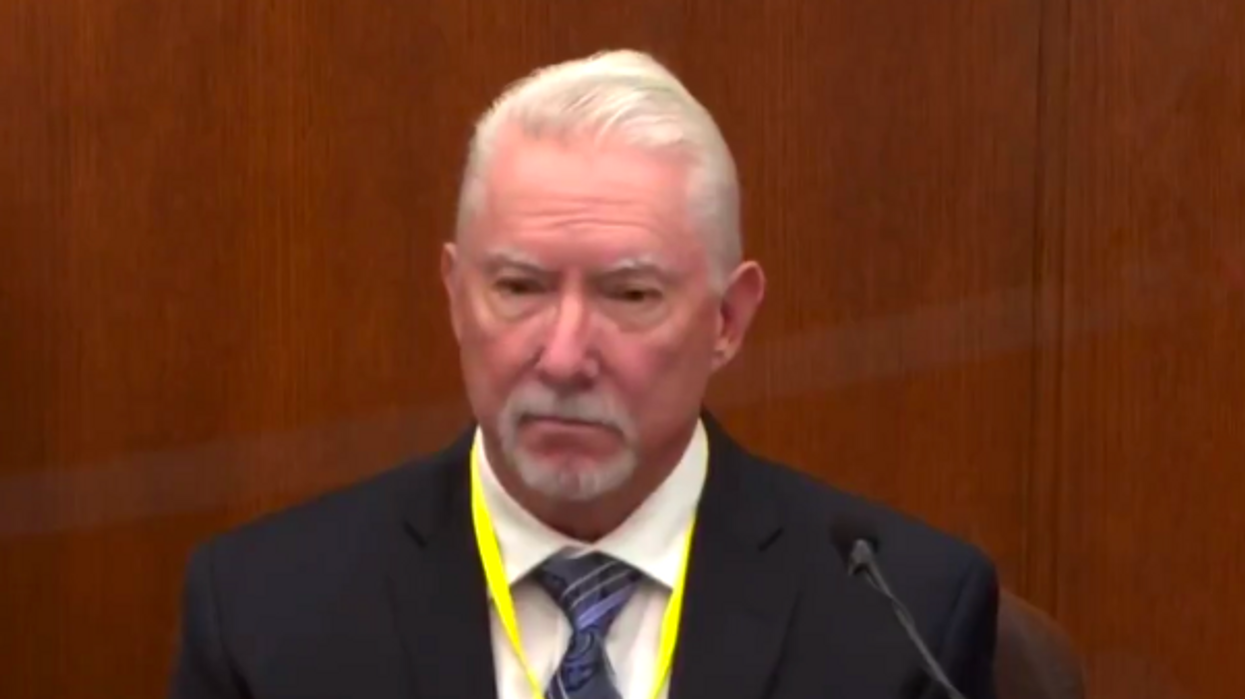 The defense in the murder trial of ex-Minneapolis police officer Derek Chauvin began building its case this week, and unfortunately but predictably attorneys seem to be trying to convince the jury that George Floyd was responsible for his own death. Barry Brodd, a use-of-force expert called by the defense on Tuesday, aided the defense in some regards. He testified that sometimes suspects "don't feel pain" and have "superhuman strength" while on drugs. He also said that Floyd was "actively resisting" and "struggling against the officers" for several minutes when being held in the prone position. "A compliant person would have both their hands in the small of their back and just be resting comfortably versus like he's still moving around," Brodd said when shown a photo of Chauvin kneeling on Floyd's neck.

He even claimed that holding Floyd in the prone position while he was handcuffed didn't constitute a use of force because Floyd wasn't in pain. "I felt that Derek Chauvin was justified, and was acting with objective reasonableness, following Minneapolis Police Department policy and current standards of law enforcement, in his interactions with Mr. Floyd," Brodd said. But even the alleged expert couldn't stick with that interpretation of the facts when the prosecution presented him with body-camera video and photos. He ended up admitting that the position Floyd was held in could inflict pain and that Chauvin's response did not align with the Minneapolis Police Department's policy.

Derek Chauvin’s use of force “expert” Barry Brodd claims George Floyd was “not compliant” because he was not “resti… https://t.co/eXYJKWcbJA
— Keith Boykin (@Keith Boykin)1618346722.0

In other matters pertaining to the case, however, Brodd seemed to stick with his interpretation of what happened. What the prosecution called "writhing on the ground because he can't breathe," Brodd deemed to be resisting. When Floyd said "everything hurts," Brodd admitted he didn't "note it."

When Floyd said his neck hurt, Brodd also admitted that he didn't make a note of it. Why, it's almost as if he was preparing for this very moment to be of use to the defense. In fact, his testimony contradicts nearly every police official who's testified in this case during the first two weeks, including Minneapolis Police Chief Medaria Arradondo.

"There's an initial reasonableness in trying to just get him under control in the first few seconds," Arradondo testified last Monday, "but once there was no longer any resistance and clearly when Mr. Floyd was no longer responsive, and even motionless, to continue to apply that level of force to a person prone out, handcuffed behind their back, that, that in no way, shape, or form is anything that is by policy.

The defense continued building on its position that Floyd's drug use caused his death, with attorney Eric Nelson focusing on the testimony of a woman who is a retired paramedic and knew Floyd. Former emergency worker Michelle Moseng testified that Floyd told during an earlier arrest in 2019 that he had taken a opioid, but he was not in respiratory distress as a result at that time.

Shawanda Hill, who was in the SUV Floyd was sitting in at the time of his detainment, testified that Floyd was "happy, normal, talking, alert" before his death on May 25, 2020. She said she had bumped into him at the Cup Foods store and he offered to give her a ride home; but while she was taking a call from her daughter, Floyd fell asleep. Hill said he nodded off repeatedly, but Floyd didn't wake up until Hill told him police were outside his window. At one point, an officer had a gun pointed at the window, she said.

Shawanda Hill, an associate of George Floyd’s who was sitting in the back seat of the car when he was first approac… https://t.co/TnyoGSqFjL
— The New York Times (@The New York Times)1618345004.0

Testimony from Minneapolis police officer Peter Chang seemed to support another element of Chauvin's defense, that a loud and unruly crowd of onlookers posed an added risk and distraction to officers. Chang described the crowd as "aggressive," but earlier witnesses testified that they were only frustrated and desperately trying to get Floyd help.

Genevieve Hansen, an off-duty firefighter who lived in the area of Cup Foods, testified that she tried to help but former Minneapolis Police Officer Tou Thao prevented her from intervening and even questioned her authority. "'If you really are a Minnesota firefighter you would know better than to get involved,'" Hansen said of Thao's reported words. She broke down in tears when describing how frustrated she felt knowing that she could help but not even being allowed to try. She admitted to calling officers a "b---h." "Mm hmm, yeah, I got quite angry after Mr. Floyd was loaded into the ambulance and there was no point in trying to reason with them anymore because they had just killed somebody," Hansen said.

View other social media postings related to the trial: