'I felt the need to call the police on the police': Witnesses describe seeing George Floyd’s murder 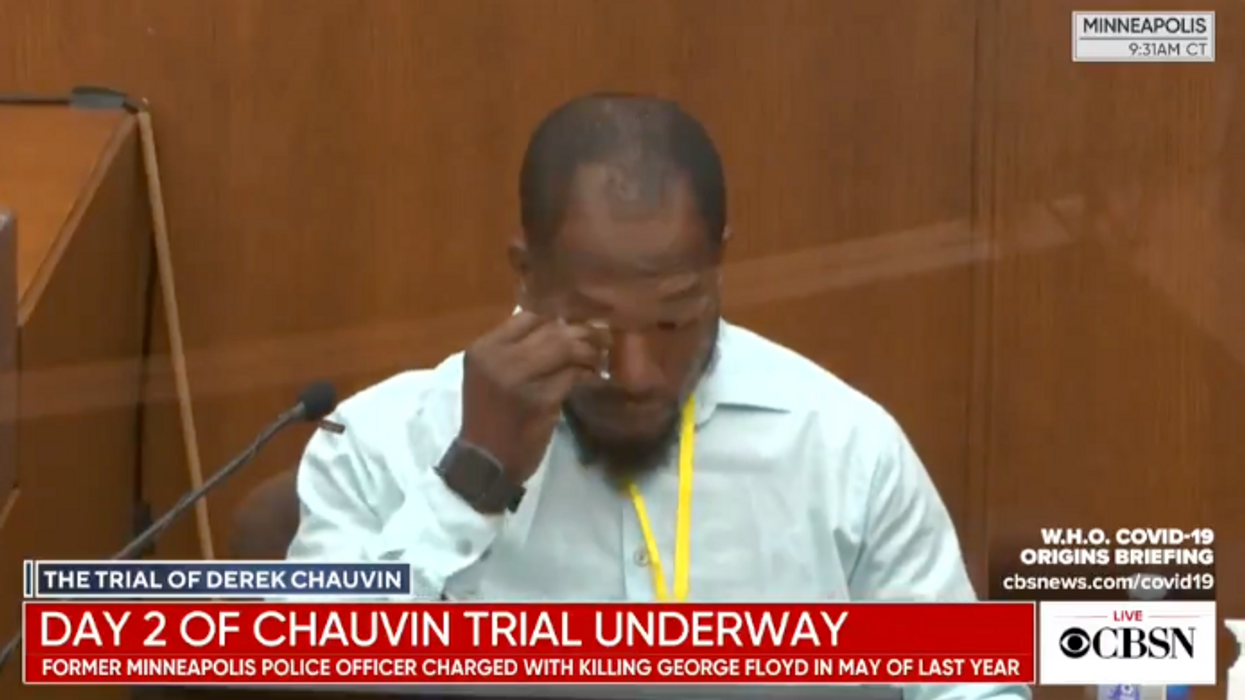 On the second day of the murder trial of former Minneapolis police officer Derek Chauvin, jurors heard chilling testimony from eyewitnesses who watched Chauvin kill George Floyd by kneeling on his neck for over nine months.

AMY GOODMAN: The trial of former Minneapolis police officer Derek Chauvin is entering its third day. Chauvin faces murder and manslaughter charges for killing George Floyd last May by kneeling on his neck for nine minutes and 29 seconds.

On Tuesday, jurors heard chilling testimony from eyewitnesses, including Darnella Frazier, who was just 17 years old when she used her cellphone to film the killing of Floyd. Her image was not broadcast on the court television feed because she was a minor at the time of his death.

JERRY BLACKWELL: When you walked past the squad car there, did you see anything happening there on the ground as you were walking towards Cup Foods with your cousin?

DARNELLA FRAZIER: Yes. I see a man on the ground, and I see a cop kneeling down on him.

JERRY BLACKWELL: So, tell the jury what you observed, what you heard, when you stopped to look at what was happening there at the scene.

JERRY BLACKWELL: Now, Mr. Nelson asked you a few questions about your video going viral and how that's changed your life. Remember that, at the end?

JERRY BLACKWELL: Would you tell the ladies and gentlemen how your viewing, experiencing what happened to George Floyd has affected your life?

AMY GOODMAN: Now 18-year-old Darnella Frazier, testifying at the trial of Derek Chauvin, who she says should have saved George Floyd's life.

MATTHEW FRANK: At some point, did you make a 911 call?

DONALD WILLIAMS: That is correct. I did call the police on the police.

MATTHEW FRANK: All right. And why did you do that?

DONALD WILLIAMS: Because I believe I witnessed a murder.

MATTHEW FRANK: And so you felt the need to call the police?

DONALD WILLIAMS: Yeah, I felt the need to call the police on the police.

AMY GOODMAN: Lawyers for officer Derek Chauvin attempted to counter the moving accounts by portraying the eyewitnesses to George Floyd's death as being part of an angry mob, but another one of the eyewitnesses was an off-duty firefighter and EMT. Genevieve Hansen told prosecutor [Matthew] Frank she urged the police officers to check George Floyd's pulse as he lay motionless on the ground.

GENEVIEVE HANSEN: I identified myself right away, because I noticed that he needed medical attention. It didn't take me long to realize that he was — had an altered level of consciousness. And in our training, that is the first time that somebody needs medical attention. So, my attention moved from Mr. Floyd to how can I gain access to this patient and give him medical attention or direct the officers. And I didn't pay much attention to George Floyd after that. …

MATTHEW FRANK: In terms of, you know, his face, when you're first there, or even the rest of him, what is it that you saw that made you concerned about his medical needs?

GENEVIEVE HANSEN: I was really concerned about — I thought his face looked puffy and swollen, which would happen if you are putting a grown man's weight on someone's neck. I noticed some fluid coming from what looked like George Floyd's body. And in a lot of cases, we see a patient release their bladder when they die. I can't tell you exactly where the fluid was coming from, but that's where my mind went. He wasn't moving. …

GENEVIEVE HANSEN: Pumping — pumping the blood for somebody that's not doing that themselves, trying to get a pulse back.

MATTHEW FRANK: And were you able to do that, any of those steps?

MATTHEW FRANK: Why weren't you able to do any of that?

GENEVIEVE HANSEN: Because the officers didn't let me into the scene. I also offered — in my memory, I offered to kind of walk them through it, or told them, "If he doesn't have a pulse, you need to start compressions." And that wasn't done, either.

MATTHEW FRANK: Is this — are these things that you wanted to do?

GENEVIEVE HANSEN: It would have — it's what I would have done for anybody.

MATTHEW FRANK: When you couldn't do that, how did that make you feel?

MATTHEW FRANK: Were you frustrated?

MATTHEW FRANK: Ms. Hansen, you know, as I told you, we can take our time, so feel free to just take a minute to — if you need a drink of water, go ahead.

MATTHEW FRANK: How were you doing that, trying to get the officers to focus on you and get help?

GENEVIEVE HANSEN: I think, in my memory, I tried different tactics of calm and reasoning. I tried to be assertive. I pled and was desperate.

AMY GOODMAN: Minneapolis firefighter and EMT Genevieve Hansen broke down in tears as she recalled seeing George Floyd die and being prevented from helping him. Visit democracynow.org to see all of our coverage on the police killing of George Floyd.