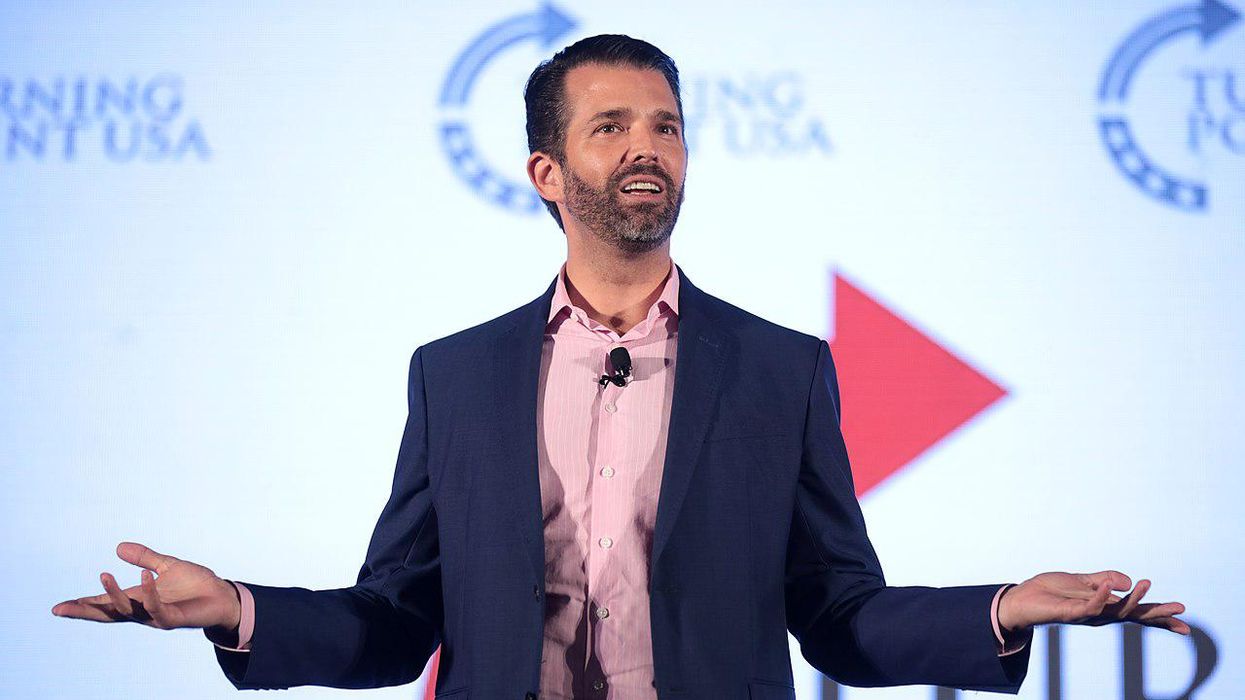 Donald Trump Jr. hasn't been in the headlines very much during the Biden era, but that doesn't mean that he has disappeared from GOP politics — far from it. Journalist Gabby Orr, in an article published by CNN's website on April 19, emphasizes that the 43-year-old son of former President Donald Trump is positioned as a key figure in his father's "post-White House political operation."

"Behind the scenes, Trump's eldest son has emerged as one of the former president's chief political advisers, according to multiple sources who are close to Trump or involved with his political operation," Orr explains. "Like his brother-in-law, Jared Kushner, who spent much of the last four years attempting to steer the Trump show from inside the West Wing, Trump, Jr. has been working closely with his father's team to ensure the next iteration of the 45th president's political career is running smoothly and that his father is endorsing reliably conservative candidates."

Orr reports that Trump Jr.'s influence in Trumpworld "extends far beyond operational guidance" and that he has "been steadily influencing his father's political instincts." An aide to the former president told CNN, "Don has the pulse of the base and knows where the energy of the party is. So, he's sort of the go-to person now on a lot of political things."

Orr describes Trump Jr. as "undeniably the most conservative member of the Trump family," and he is doing his part to encourage the GOP's far-right direction.

Trump Jr.'s sister, former White House Senior Adviser Ivanka Trump, is politically right-wing but isn't nearly as snarky as her brother. Trump Jr. is much more of an in-your-face "own the liberals" type of Republican — and while more moderate Republicans can't stand him, MAGA voters adore him.

"Trump Jr.'s rising influence was first visible to his father's aides in February, when Trump delivered his first major speech since leaving office at the annual Conservative Political Action Conference in Orlando," Orr observes. "There, the 45th president went on a lengthy riff about transgender athletes competing in interscholastic supports — a topic he had previously ignored as it was bubbling up in state legislatures across the country and as his own administration threatened to axe federal funding for schools that implemented trans-inclusive sports policies. Aides later said it was Trump Jr. who had encouraged his father to weigh in on the matter at CPAC, knowing it would be red meat for the overwhelmingly conservative crowd."

A source described by Orr as someone "close to Trump Jr." told CNN, "He was always fighting for the cause big-picture wise, but now, Don is taking more of a leading role in shaping the political direction of Trump's post-presidency."

According to Orr, Trump Jr. has "become a key conduit for GOP candidates vying for the 45th president's support" and has "been intimately involved in the vetting process for Republican hopefuls seeking Trump's coveted endorsement."

Former White House Press Secretary Sean Spicer told CNN, "He recognizes candidates who are authentically invested in the America First agenda and can spot those who are faking it. While it's true that all roads lead to Mar-a-Lago, smart candidates know there's a pit stop with Don that ensures a higher degree of success."

A source described by Orr as someone "close to" the former president told CNN, "I don't think the president is looking to Jared for advice these days."