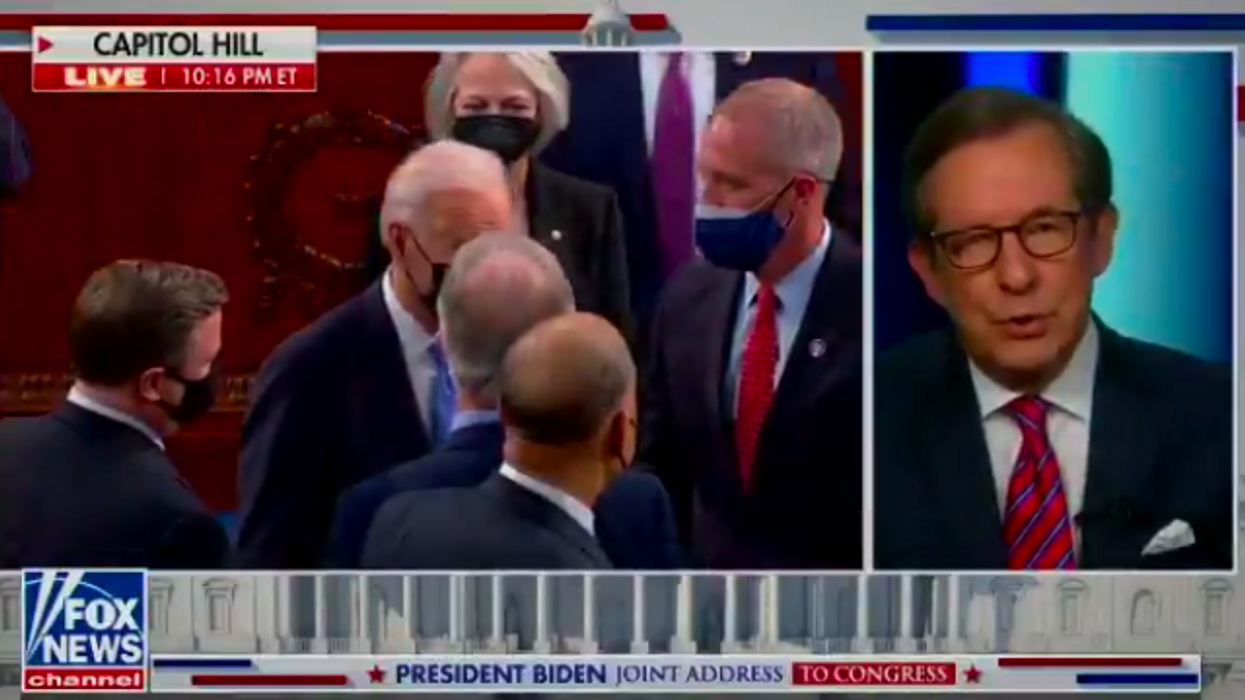 After President Joe Biden gave a speech before members of both houses of Congress on Wednesday evening, April 28, many pundits in the right-wing media responded with predictable rhetoric and knee-jerk claims that Biden was promoting a "radical socialist agenda." But Chris Wallace is among the minority of conservative Fox News hosts who actually offered some nuanced observations after the speech.

Wallace, around 10:16 p.m. eastern time, told his Fox colleagues, "I think this is going to be a popular speech with the American public. He offered a lot of stuff…. from millions of jobs to child care to community health centers. All kinds of stuff. Community colleges. And the other thing that's pretty popular is he said: You're not going to have to pay for it. Big corporations are going to pay for it. People making more than $400,000 are going to pay for it, but the vast majority of people watching tonight aren't. So, offering a lot of stuff and saying you aren't going to have to pay for it is pretty popular."

Wallace, who has interviewed Biden on his Sunday afternoon show, continued, "I think they're made a calculation that after COVID, that people have come to have a different feeling about government — that they now feel more trusting and more in need of government. And so, where this might have turned a lot of people off —and probably still will— they believe the majority of people are going to say: the government's here, and they're here to help."

Wallace was making a Ronald Reagan reference. In the early 1980s, President Reagan famously said that "I'm the government, and I'm here to help" were words to be afraid of. Government, Reagan argued, was the "problem" and not the "solution" — and that philosophy ushered in the era of Reaganomics and trickle-down economics.

Ben Domenech, who co-founded the Federalist and is married to Meghan McCain, didn't like hearing a nuanced critique of Biden's speech. Taking a shot at Wallace on Fox News, Domenech complained, "The last time I was on air talking the same time as Chris Wallace about a Joe Biden speech he waxed eloquent about — how it was so powerful and unifying — I don't think that that turned out to be true at all. I think it turned out to be a complete tissue of lies that Republicans rejected. It's not something that actually led to any kind of bipartisanship. I expect the same result from this speech."

Ben Domenech follows up by taking a shot at his colleague Chris Wallace: "Last time I was on air talking the same t… https://t.co/0qM9Dq2D1O
— Justin Baragona (@Justin Baragona)1619663628.0

Here are some responses to Domenech's comments:

@justinbaragona The gop politicians on the right hate it because this will help their constituents. They don't want… https://t.co/19xKFyv6lg
— leenich (@leenich)1619691718.0

@justinbaragona Wasn't this the same guy who said if Biden really wanted to impress him he would double the number… https://t.co/HXIlnh5Qcu
— Trev (@Trev)1619693327.0