The party of Charlottesville: Trump's praise of white nationalists is now the GOP mainstream 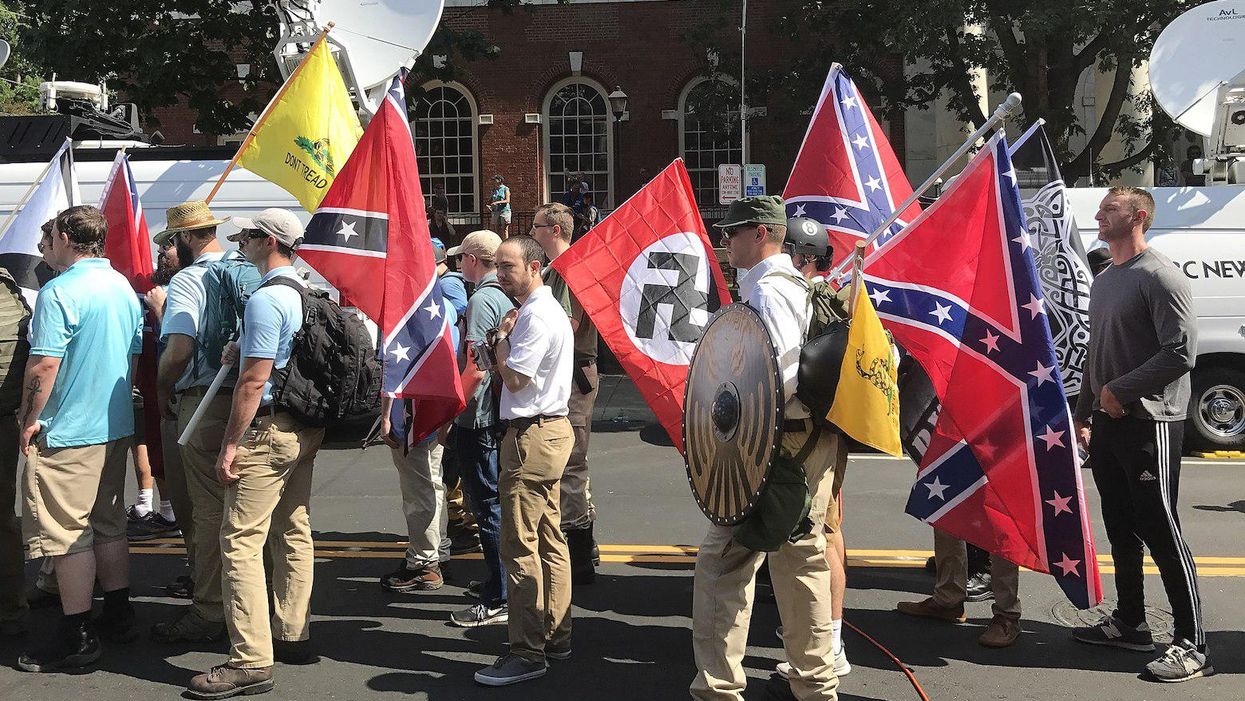 Former Democratic National Committee chair Howard Dean had some choice words for the modern Republican Party during a recent interview with Molly Jong-Fast of The Daily Beast. He called the GOP "racist" and "neo-fascist" and, hilariously, compared the Republican congressional caucus specifically to a "sentient YouTube comment section." I expected there to be some outrage, but so far not so much. Apparently, even Republicans are running out of energy to deny what is obviously true about their party. Donald Trump's only been out of office for a little over three months and his once-shocking levels of racism have now become just normal Republican politics.

In August 2017, Trump incited one of the larger of his nearly infinite controversies by insisting that a crowd of neo-Nazis and other white nationalists who gathered for a race riot in Charlottesville contained "very fine people" in it. Over the next few days, Trump did his usual thing of backing off the racist comments and then backing off the back-off. Ultimately, everyone walked away with the same general understanding: Trump's heart was with the white nationalists and any half-hearted gestures otherwise were political theater no one actually took seriously. Efforts by conservative pundits to clean up Trump's comments over the next few years were merely meant to get liberals to stop bugging them about it, not a genuine sign of confusion over where he stood on the matter.

Trump was constantly in the news for saying racist things, but this one stuck out because that crowd of "very fine people" that Trump had so much love for produced a murderer that day. James Fields Jr. rammed his car into a crowd of anti-racists that were counter-protesting, killing a woman named Heather Heyer and injuring 19 others, five critically. Fields went to prison for the attack, but Republican politicians, following Trump's "very fine people" lead, have since moved to legalize what Fields did that day.

In Oklahoma and Florida, Republicans have passed new laws making it legal for motorists to run over protesters, so long as they claim that they felt afraid of a "riot." The laws are clearly meant to give cover to people who attack anti-racist protesters, a trend that started with Fields murdering Heyer but has spread rapidly on the right. Over the Black Lives Matter protests last summer, there were a whopping 104 incidents — including 8 by police — of motorists hitting protesters with cars. The 2017 video of Fields slamming his car into a crowd was a genuine shock, but similar images became sadly common in 2020. Now Republicans want to make it legal.

Such laws are part of a larger push to use violence and threats to silence anti-racism.

The pro-vehicular homicide law in Florida, for instance, is part of a larger package signed by Republican Gov. Ron DeSantis that redefines "rioting" in order to make it easier for police to shut down anti-racism protests. DeSantis has explicitly tied the bill to the conviction of former Minneapolis cop Derek Chauvin for murdering George Floyd, insisting that the conviction was because "the jury is scared of what a mob may do" and not because of the evidence — including a video of the murder, which happened in broad daylight — of Chauvin's guilt.

Indeed, this overwhelming evidence against Chauvin is also overwhelming evidence that his supporters in the media and politics simply believe that police should have an unchecked "right" to kill people of color at will. In fact, Chauvin's guilt was so obvious that many in the right-wing media initially seemed to feel the smart move was to throw him under the bus. But Tucker Carlson of Fox News went all-in on treating the verdict like a travesty and now even supposedly more "intellectual" outlets like National Review are hyping the idea that the "real" bad guys are the ones who wanted Chauvin to pay for his crimes.

The "anti-anti-Chauvin" messaging appears to be working.

Right after Chauvin's verdict, a Morning Consult/Politico poll showed that 61% of Republicans said the jury decided correctly while only 29% defended Chauvin. A few days later, after much of the right-wing media portrayed Chauvin as a martyr, a CBS News/YouGov poll showed a shift with 46% of Republicans opposing the verdict and 54% supporting it. That's still the majority, thankfully. But considering how the murder was both dramatic and indisputable, these numbers suggest that Carlson and other figures are successfully winning over Republicans with the notion that people who commit racist violence shouldn't be held accountable. Which, of course, is also the message of the laws legalizing hitting protesters with cars.

It's not just that the larger GOP is increasingly embracing Trumpesque levels of comfort with racist violence. They are also embracing Trump's racist reaction to the 2020 election, which he continuously insisted was "stolen" with racist rhetoric painting voters in cities like Philadephia and Detroit as illegitimate.

A new bill in Texas further dispenses with the GOP's paper-thin rationale of "concerns" about "fraud" to nakedly target the ability of voters in racially diverse cities to cast ballots at all. It sets forth a bunch of regulations to make it much harder to vote, but limits the restrictions to cities with populations of over a million people. It's crystal clear why: The cities of Texas are racially diverse and left-leaning, whereas most rural districts in the state are white and conservative.

The racist intent is right on the surface, and likely, that's a huge part of the point. We already saw this in Georgia, where the racist signaling around the signing of an anti-voting law was so over-the-top that it had to be intentional. Making it hard to vote, but only in the cities, sends a message from the GOP leadership to their own voters: "We are targeting people of color."

The big takeaway that Republican leaders and conservative pundits clearly got from the Trump era was that the Republican base wants their racism delivered piping hot and with the minimal amount of subtlety. It's a situation that is likely to get much worse before it gets better.