Share vaccine recipes with poor during pandemic? One of world's richest men says 'no' 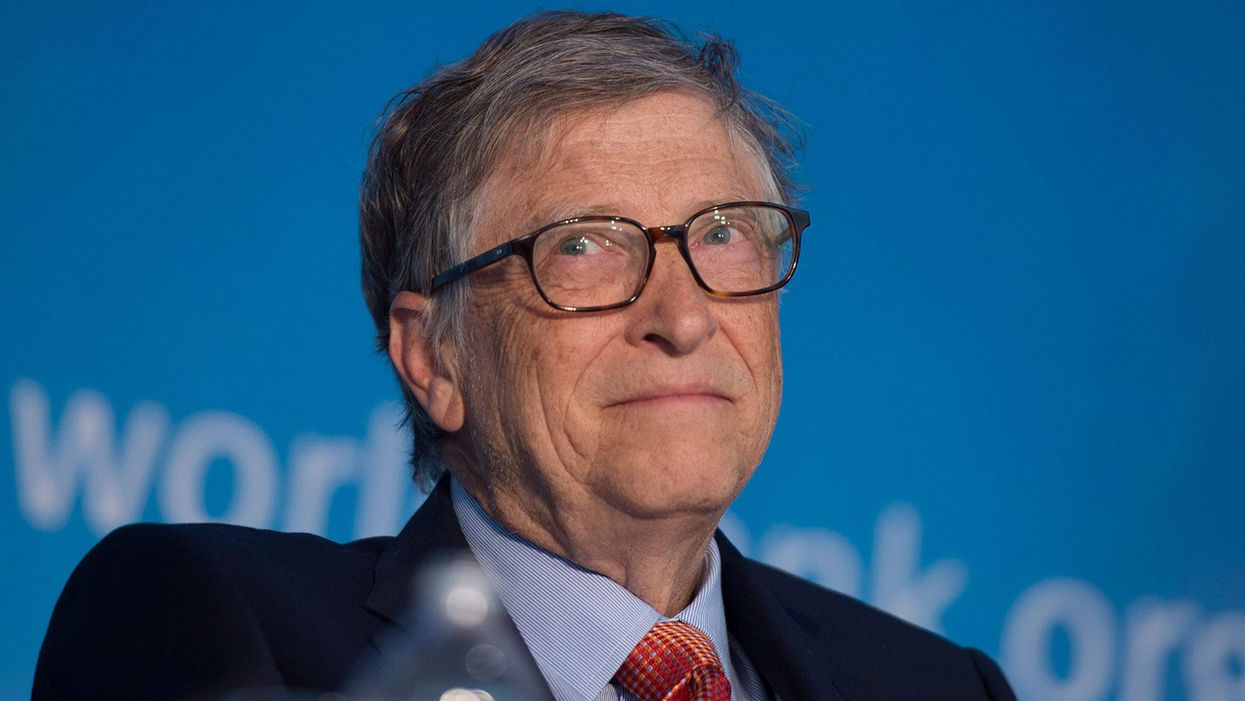 Bill Gates, one of the world's richest men and most powerful philanthropists, was the target of criticism from social justice campaigners on Sunday after arguing that lifting patent protections on Covid-19 vaccine technology and sharing recipes with the world to foster a massive ramp up in manufacturing and distribution—despite a growing international call to do exactly that—is a bad idea.

Directly asked during an interview with Sky News if he thought it "would be helpful" to have vaccine recipes be shared, Gates quickly answered: "No."

Asked to explain why not, Gates—whose massive fortune as founder of Microsoft relies largely on intellectual property laws that turned his software innovations into tens of billions of dollars in personal wealth—said that: "Well, there's only so many vaccine factories in the world and people are very serious about the safety of vaccines. And so moving something that had never been done—moving a vaccine, say, from a [Johnson & Johnson] factory into a factory in India—it's novel—it's only because of our grants and expertise that that can happen at all."

The reference is to the Serum factory in India, the largest such institute in the country, which has contracts with AstraZeneca to manufacture their Covid-19 vaccine, known internationally as Covishield.

The thing that's holding "things back" in terms of the global vaccine rollout, continued Gates, "is not intellectual property. It's not like there's some idle vaccine factory, with regulatory approval, that makes magically safe vaccines. You know, you've got to do the trial on these things. Every manufacturing process needs to be looked at in a very careful way."

Critical advocates for robust and immediate change to intellectual property protections at the World Trade Organization when it comes to the Covid-19 vaccines, however, issued scathing indictments of Gates' defense of the status quo.

Gates speaks as if all the lives being lost in India are inevitable but eventually the West will help when in reali… https://t.co/bNCkebIcDQ
— Tara Van Ho (Dr) (@Tara Van Ho (Dr))1619364685.0

Nick Dearden, executive director of Global Justice Now, one of the lead partner groups in an international coalition calling for WTO patent waivers at a crucial meeting of the world body next month, characterized Gates' remarks—and the ideological framework behind them—as "disgusting."

"Who appointed this billionaire head of global health?" asked Dearden. "Oh yeah, he did."

Journalist Stephen Buryani, who on Saturday wrote an in-depth Guardian column on the urgent need for the patent waivers and technology sharing, offered a similarly negative view of the billionaire's "awful" arguments against sharing the vaccine technology.

Gates, charged Buryani, "acts like an optimist but has a truly dismal vision of the world."

During the Sky News interview, Gates said it was "not completely surprising" that the richest nations like U.S., U.K., and others in Europe vaccinated their populations first. He said that made sense because the pandemic was worse in those countries, but said he believed that "within three or four months the vaccine allocation will be getting to all the countries that have the very severe epidemic."

COVID-19: Bill Gates hopeful world 'completely back to normal' by end of 2022 www.youtube.com

Offering his interpretation of what Gates was actually throughout the interview, Buryani paraphrased it this way: "We can't make more vaccines, we can't compromise profits, we can't trust poor countries with our technology, and they'll get their scraps after we eat."

Bill Gates on Sky today, acts like an optimist but has a truly dismal vision of the world. We can’t make more vacc… https://t.co/YoPYFwCwgL
— Stephen Buranyi (@Stephen Buranyi)1619349995.0

"The poverty of vision from [Gates] and other 'leaders' has been astounding," added Buryani. "Smallpox, Polio, both had joined-up responses that shared knowledge and technology across the world. We're happy to let the *pharma* market sort out the biggest crisis of our lifetimes. Totally on autopilot."

While public health experts agree that developing nations may not have the current know-how or capacity to produce advanced vaccines at scale, they argue that is also the result of policy choices that governments and others have made. Earlier this month 66 organizations called on the U.S. to initiate a global vaccine manufacturing program that, in tandem with patent waivers and recipe sharing, would pave the way for ramped up capacity.

"The U.S. government has helped produce hundreds of millions of vaccine doses for people living in the U.S., on a relatively short timeline. The same is needed—and within reach—for all countries," said Peter Maybarduk, director of Public Citizen's Access to Medicines program, at the time. "The key missing ingredient is ambitious political leadership, to end the pandemic for everyone, everywhere."

Meanwhile, in a detailed online social media thread earlier this month, journalist and activist Cory Doctor stated that while numerous "people helped create our 'Vaccine Apartheid,' the single individual who did the most to get us here is Bill Gates, through his highly ideological 'philanthropic' foundation, which exists to push his pitiless doctrine of unfettered monopoly."

Doctorow also pointed people to a feature in The New Republic by Alexander Zaitchik earlier this month which details Gates has long used his "hallowed foundation" and position as the "world's de facto public health czar" to defend the intellectual property regime that is now central to the fight between those defending "Vaccine Apartheid" on the one hand and international campaigners fighting for a "People's Vaccine" that would unleash the life-saving inoculations from their corporate masters in the pharmaceutical industry.

Bill Gates’ failure to anticipate a crisis of vaccine supply, and his refusal to engage those who predicted it, hav… https://t.co/M69ljEgMdU
— The New Republic (@The New Republic)1618250452.0

In April [of 2020], Bill Gates launched a bold bid to manage the world's scientific response to the pandemic. Gates's Covid-19 ACT-Accelerator expressed a status quo vision for organizing the research, development, manufacture, and distribution of treatments and vaccines. Like other Gates-funded institutions in the public health arena, the Accelerator was a public-private partnership based on charity and industry enticements. Crucially, and in contrast to the C-TAP, the Accelerator enshrined Gates's long-standing commitment to respecting exclusive intellectual property claims. Its implicit arguments—that intellectual property rights won't present problems for meeting global demand or ensuring equitable access, and that they must be protected, even during a pandemic—carried the enormous weight of Gates's reputation as a wise, beneficent, and prophetic leader.

How he's developed and wielded this influence over two decades is one of the more consequential and underappreciated shapers of the failed global response to the Covid-19 pandemic. Entering year two, this response has been defined by a zero-sum vaccination battle that has left much of the world on the losing side.

Quoted in the piece is James Love, founder and director of Knowledge Ecology International, which studies public policy and intellectual property as it intersects with public health and the drug industry. Love explains just how powerful the influence of Gates and the Bill & Melinda Gates Foundation has been in curtailing the conversation around I.P. and vaccines.

"If you said to an ordinary person, 'We're in a pandemic. Let's figure out everyone who can make vaccines and give them everything they need to get online as fast as possible,' it would be a no-brainer," Love told TNR. "But Gates won't go there. Neither will the people dependent on his funding. He has immense power. He can get you fired from a U.N. job. He knows that if you want to work in global public health, you'd better not make an enemy of the Gates Foundation by questioning its positions on I.P. and monopolies. And there are a lot of advantages to being on his team. It's a sweet, comfortable ride for a lot of people."

Back at the beginning of the pandemic in March of 2020, said Love, "Things could have gone either way, but Gates wanted exclusive rights maintained." That, argues, was crucial in terms of what has happened since.

As Doctorow also suggests in his exploration of the issue, the fix was in from the beginning in terms of intellectual property and the Covid-19 pandemic and nobody should take seriously Gates' argument that there's simply not enough time to make lifting patent protections a priority at this point.

"Having sabotaged the efforts by poor countries to engage in the kind of production ramp-up the rich world saw as vaccines were being developed, it may NOW be too late," tweeted Doctorow. "Because of my bad ideas THEN, it's too late NOW."
From Your Site Articles
Related Articles Around the Web
Report typos and corrections to: feedback@alternet.org.
#story_page_ below_article