'Wild card': One of Arizona’s kookiest pro-QAnon ‘Stop the Steal’ wingnuts wants to be secretary of state 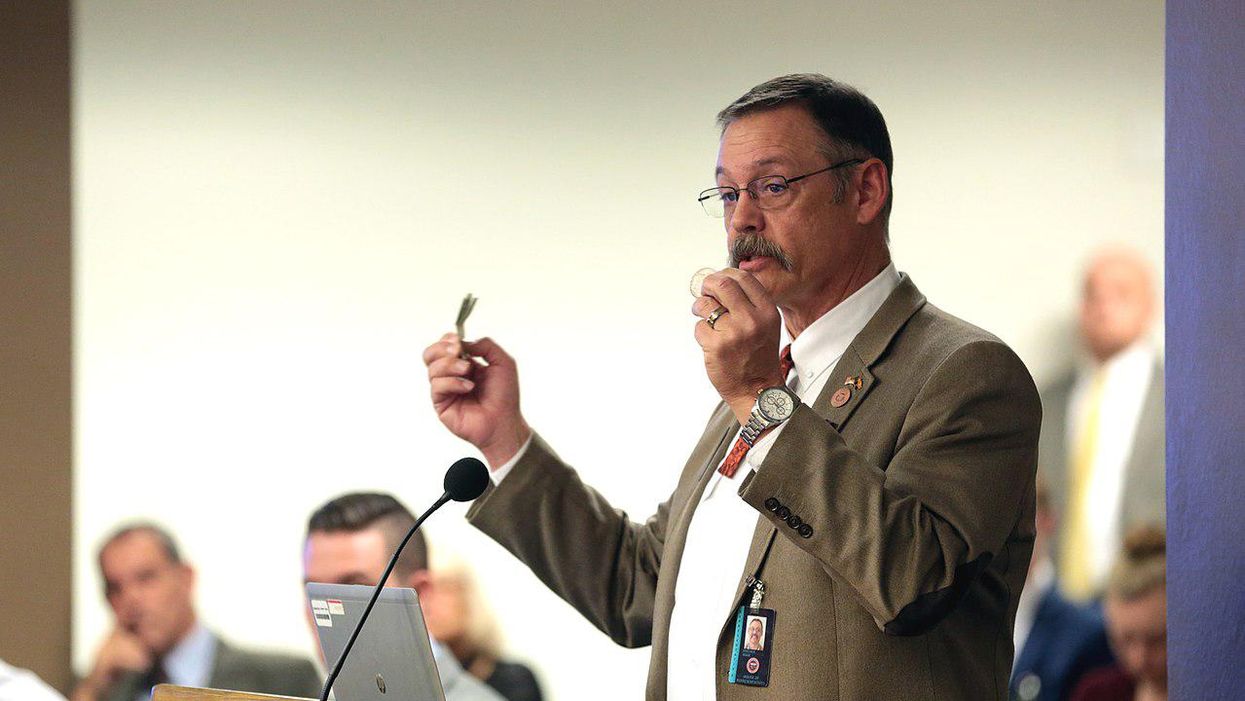 Arizona State Rep. Mark Finchem will not be mistaken for a Never Trump conservative anytime soon. The far-right Republican conspiracy theorist, who comes from the Rep. Marjorie Taylor Greene/Rep. Lauren Boebert school of extremism, has voiced his support for QAnon, praised the Oath Keepers, promoted former President Donald Trump's bogus election fraud lies and falsely claimed that antifa attacked the U.S. Capitol Building on January 6. And now, Finchem is running for Arizona secretary of state — which, journalist Cameron Joseph stresses in an article published by Vice on April 12, would put him in charge of elections in the Grand Canyon State.

"Some Republicans worry that Finchem could be a force to contend with in primary, given how virulently pro-Trump much of the GOP base is in the state," Joseph observes. "And Democrats are terrified at the prospect of Finchem in charge of Arizona's election system heading into 2024 — when the state could once again be at the epicenter of the presidential map."

One of the Arizona Democrats who is sounding the alarm about Finchem is Bonnie Heidler, who chairs the Pima County Democratic Party Chair. Heidler told Vice, "I'm totally freaked out that he's running. He cannot hold that position. If he does, democracy is completely out of the question."

Heidler is right to be concerned given Finchem's history. After now-President Joe Biden defeated Trump in the 2020 presidential election, Finchem joined Trump in promoting the false claim that the election had been stolen from him because of widespread voter fraud — and he claimed that Trump really won Arizona. Finchem, like Trump, was furious when Gov. Doug Ducey, a conservative Republican, certified Biden's Electoral College victory in the state.

On his website, Finchem claims, "Since my very first election, I knew something was very wrong with our elections process. Then on November 3rd, 2020, the unthinkable happened: Americans witnessed real-time reallocation of votes from one candidate to another, broadcast on national television."

Such claims have been totally debunked by cybersecurity experts for the U.S. Department of Homeland Security, but that hasn't prevented Finchem from promoting them. And on January 6 — before the storming of the U.S. Capitol Building — he was in Washington, D.C. for Trump's Stop the Steal Rally.

During a March 4 appearance on Victory News — a Christian Right outlet — Finchem pushed the QAnon conspiracy theory, saying, "They're finding so many kids. We've got a serious problem in this nation. And that's one of the things that disturbs me so much about our current congressional state of affairs. There's a lot of people involved in a pedophile network and the distribution of children, and that makes me absolutely sick. And unfortunately, there's a whole lot of elected officials that are involved in that."

In order to become Arizona's secretary of state, Finchem would have to win the GOP primary, followed by the general election. A Republican strategist in Arizona told Vice that a Democrat will easily win the general election if Finchem is the nominee — saying, "If he wins the primary, we're done."

But Democrat Tony Cani, who worked on Biden's 2020 campaign in Arizona and is now working on an effort to get Finchem thrown out of the Arizona House of Representatives, told Vice, "I think that he is a legitimate threat to not only win the nomination, but to ride a wave of lies and conspiracy theories into office. Elections in Arizona are a wild card, and we have a history of people with extreme views navigating their way into office."