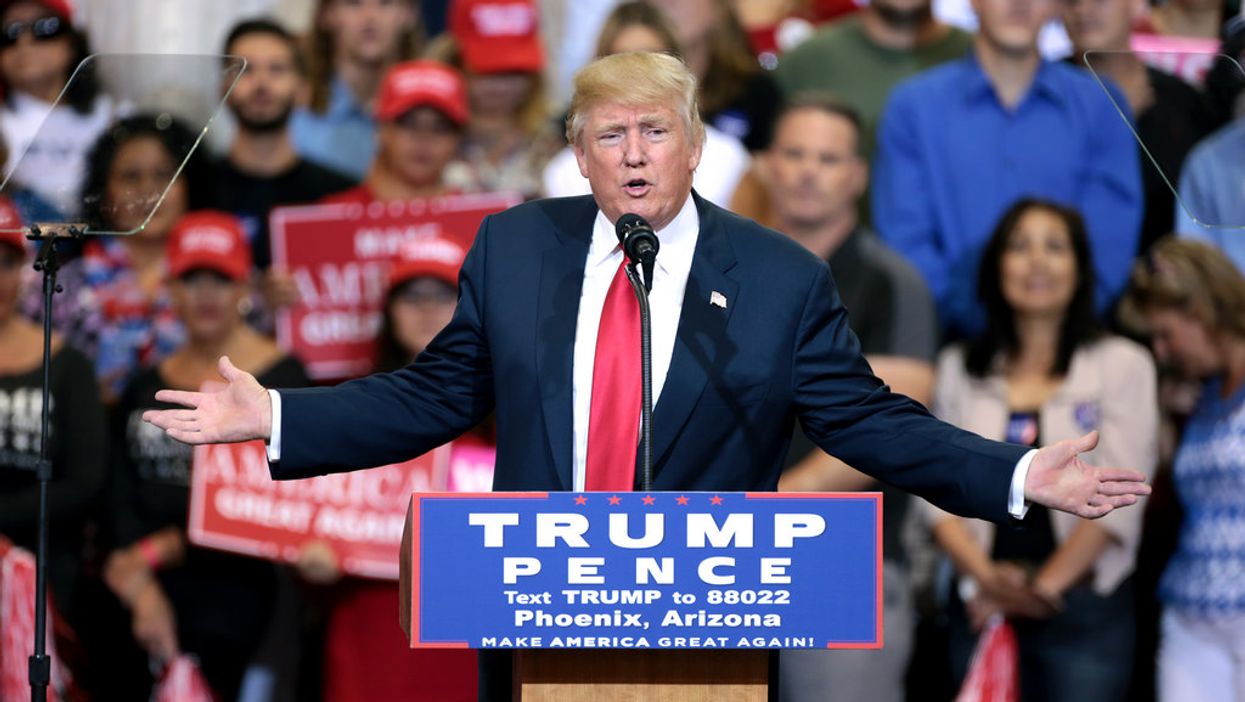 In the aftermath of the passage of the American Relief Plan, Republicans are caught in a swirl of regret and recriminations.

President Joe Biden's $1.9 trillion package, which tackles the twin problems of ending the pandemic and relieving the economic pain it's caused, is incredibly popular with the public. It enjoys approval from not just a large majority of Americans but a plurality of Republican voters as well. A huge part of the reason why has been the lack of effort from well-heeled conservative groups to seed "grassroots" opposition through their usual Astroturfing methods.

This "wait-and-see approach has baffled some GOP luminaries and Trump World figures who expected Republicans to seize their first opportunity to cast newly-in-charge Democrats as out of control," reports Politico, adding that "the party did little to dent Biden's major victory."Steve Bannon, Donald Trump's former advisor who was recently arrested on charges of defrauding gullible conservatives with a fake border wall group, has complained about the "lack of response to this bill in an organized messaging and aggressive media push back."

It is a little puzzling, especially in light of what happened in 2009, when then-President Barack Obama saw an uprising of rage, dubbed the "Tea Party," first against his economic relief bill and then against the Affordable Care Act. This time around, there's a curious dearth of angry white people clad in cargo shorts and tricorner hats hitting the streets to wave incoherent cardboard signs. Considering how much enthusiasm there was on the right for the outright overthrowing of the government through violence just a couple of months ago, this "meh" reaction to Biden's bill is a bit surprising.

In the past five years, the GOP morphed from a real political party that had a platform to a personality cult built around a failed businessman, a party whose only platform was "do whatever Dear Leader says is his whim today." Now Trump has retreated to Mar-A-Lago, having failed at his efforts to steal the 2020 election or incite a coup to overthrow the government. And he is way more interested in trying to reroute donor money from Republicans to his own pockets than he is getting involved in an organized effort to oppose Biden's economic and pandemic rescue plan.

In 2009, there was a multitude of conservative groups, many of them funded by the Koch brothers, on hand to coordinate a response to Obama's economic rescue plan. They understood that the GOP base wasn't actually interested in "small government," but they were able to tap into the racism that actually animates the base, telling supporters a fake story about how Obama's American Recovery and Reinvestment Act was just a cover for the federal government to give free houses away to Black and Latino people. Quite literally, Tea Party groups were selling "Honk If I'm Paying Your Mortgage" bumper stickers, premised on this deeply racist and false narrative. That racism was then channeled into the opposition to the Affordable Care Act, as these same Astroturf groups seeded lies about things like "death panels," meant to scare aging white people into believing their health care would be taken away and given to younger, more racially diverse Americans. It's the same crap Republicans have been pulling for decades, channeling the energies of racists towards the goals of the economic elite to keep their own taxes and regulations low.

Now, however, Trump has captured the loyalties of that group of racist white Americans who make up the GOP base. More importantly, he cut out the middleman by embracing an overt form of racism that's more appealing than the coded dog whistles of the past. The more traditional form of GOP politics, where racism has to be sublimated into movements that pretend to be about "small government," like the Tea Party, just can't compete.

So while Trump is gone, for now, the party is still organized around Trump and his particular obsessions, especially his anger over losing the 2020 election, and his rather unsubtle narrative characterizing voters in cities like Philadelphia, Atlanta, and Detroit as "illegal" and "fraudulent." Republican donors and conservative activists don't have the energy to fight against Biden's agenda, because they're focused on relitigating the 2020 election and embracing Trump's desire to punish and marginalize those who voted against him, especially those Democratic voters who are Black.

The New York Times reports, "Americans for Prosperity, the political organization funded by the Koch fortune, is not supporting the efforts to pass more ballot access laws, nor are other groups in the multimillion-dollar Koch political network." Americans for Prosperity was the main organization behind the "grassroots" Tea Party, and they are focused on using their might, as they did in the Obama years, to resist the legislative agenda of a Democratic president. But the base isn't along for the ride, as they were back then, because backing Trump's war on Black voters is more interesting to them than resisting Biden's legislative agenda.

To be clear, the threats to voting rights are extremely serious. As Heather "Digby" Parton explains at Salon, it's crucial that Democrats pass a voting rights bill, or they very well may find themselves left never winning national elections again. But it is also no surprise that it's hard for Republicans to muster much enthusiasm to fight Biden's legislative agenda, when they are so focused on pursuing the Trump-set priority of waging war on voting rights.

As Igor Derysh reported earlier this week, the two Republicans in Congress who have done the best job of associating themselves with Trump's attempted coup — Sen. Josh Hawley of Missouri and Rep. Marjorie Taylor Greene of Georgia — have also been raking in the dough from donors. As Derysh explained in Friday's Standing Room Only newsletter, this shows how "a growingly extremist Republican base" is spliting from "corporate PACs and big donors" that are less interested in Trump-centric politics.

The Trump addiction of the GOP is a double-edged sword, to be sure. On one hand, as Biden and the Democrats are discovering, it has drained the Republican base of interest in pursuing goals, such as resisting the American Rescue Plan, that aren't set by Trump. It's created a real opportunity for Democrats to push through a bunch of legislation, if they could just get rid of the filibuster, without facing much opposition from the right. Still, Trump's anger at losing the election has focused Republicans on a war on voting that could very well destroy democracy itself, if Democrats don't do more to save it.

If Republicans are successful at gutting democracy and turning the federal government into a one-party GOP state, it ultimately won't matter how many economic relief bills Biden was able to pass.