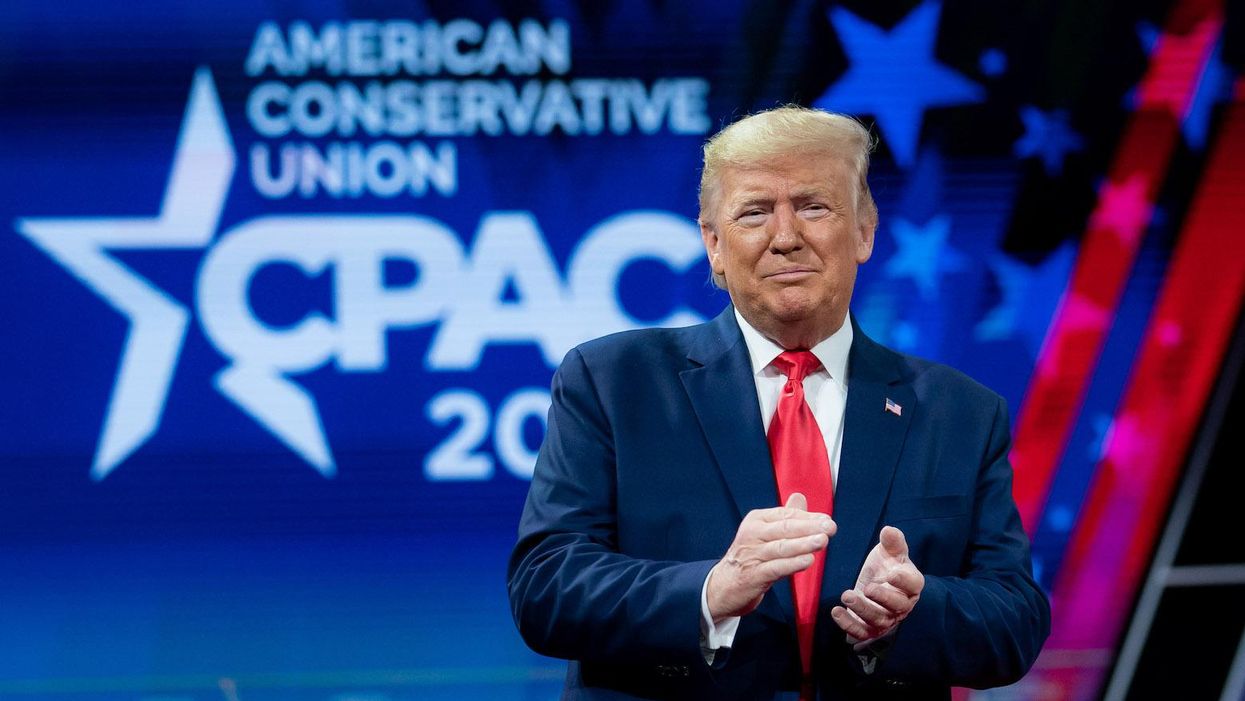 With his trademark hair helmet a bit less brassy and his bronzer evenly applied, a rested and recharged former president Donald J. Trump made his triumphant return to the main stage at the annual CPAC convention on Sunday and it was like he never left. Delivering a patented 90-minute rally speech that could have been delivered in October of 2020, or October of 2016 for that matter, Trump hit all his low notes from the border wall to China trade to the Muslim ban to the mortal dangers of windmills. The only addition to his greatest hits were a lengthy riff on the Big Lie, a declaration of war against all Republicans who've betrayed him and a new attack on the Supreme Court for being "cowards."

In other words, it was the same old, same old, and while the crowd cheered and swayed awkwardly to their favorite decadent 70's disco tunes "Macho Man" and YMCA," it was a rather sad little spectacle in a small hotel ballroom that couldn't hide the fact that any other weekend it would probably be hosting an insurance underwriter conference. While Trump has clearly decided to "tease" his decision about whether he's running again, hinting broadly that he almost certainly plans to do it, it's hard to imagine he isn't going to insist on holding a major rally sometime soon to prove he can still pull a big crowd.

Of course, he won the convention's annual straw poll, but he only got 55% support which had to be something of a blow. He certainly couldn't have been happy to see his loyal henchman Florida Governor Ron DeSantis come in second with 21%. (If I were DeSantis, I'd keep my back to the wall for a while.) The rest of the vote was split among a dozen others, including former Secretary of State Mike Pompeo, who gave a remarkably churlish speech, Kristi Noem, the governor of South Dakota, and Texas Sen. Ted Cruz, who seems to be moonlighting either as a comedian or a barking seal these days.

So it is little surprise that despite the fact that the conference's theme was "Uncancel America," Trump went out of his way to cancel a whole lot of Republicans he considers disloyal, promising to do everything in his power to "get rid of 'em all." He didn't mince words:

He called out every single GOP politician who voted for impeachment individually, his voice dripping with venom, ending with the most hated of all his enemies, Wyoming Rep. Liz Cheney. I'm only surprised the crowd didn't erupt in a raucous round of "lock her up" when he mentioned her name. He didn't spare Senate Minority Leader Mitch McConnell, R-Ky., whom he claimed owed his seat to him, which is utter nonsense, either.

Whether Trump ends up running again or not — and I suspect he will if he is able — he is already making it clear that he will use whatever clout he has to destroy anyone who speaks out against him. In fact, that's his priority. This is a man, after all, who has said over and over again that the most important thing in life is getting even. As he wrote in his 2009 book called "Think Big":

I love getting even when I get screwed by someone. ... Always get even. When you are in business you need to get even with people who screw you. You need to screw them back 15 times harder. You do it not only to get the person who messed with you but also to show the others who are watching what will happen to them if they mess with you. If someone attacks you, do not hesitate. Go for the jugular.

Trump's collected a big wad of money from his faithful and he's got lots of time on his hands. He's reportedly forming a new Super PAC with his former campaign manager Corey Lewandowski at the helm, which seems to be the likliest vehicle for revenge. Looks like he needs to "settle all the family business" before focusing on his own campaign.

Mark Caputo of Politico wrote a piece last week in which he harkened back to the "lane" theory of 2016 and surmised that there will be three, "Trump Ultra", "Trump-Lite" and "Trump-zero." I won't go into the full analysis —I think it's obvious from the cute names what he was getting at. But the upshot is that everyone will be traveling down Trump Interstate Highway, one way or the other. Warming up the crowd for Trump on Sunday, Ohio Rep. Jim Jordan helped make Caputo's point and made clear where the party is today:

So what are all the other 2024 presidential hopefuls to do?

Trump has made it very clear that he won't stand for any criticism and GOP primary voters are as enthralled as ever. Even if they never say a harsh word against him and continue to publicly kiss his ring, can any Republican even hope to raise money without risking his ire? I wouldn't think so. Basically, they are all running exactly the same playbook they ran in 2016: hug Trump as tight as possible in the hopes that when he finally flames out they will inherit his voters who will love them almost as much as they love him. But how did that work out for them last time?

Of course, the bloom could finally come off the rose over the course of the next few years. Maybe his acts of revenge will backfire, the people who crossed him will survive and his power will wane because of it. He's no spring chicken and he might not be up for another run. There's also a chance that some of the many legal proceedings against him will somehow make it impossible for him to seek another term. But until something like that happens, Trump has got his golden 757 parked right in the middle of that highway and nobody else is taking off.