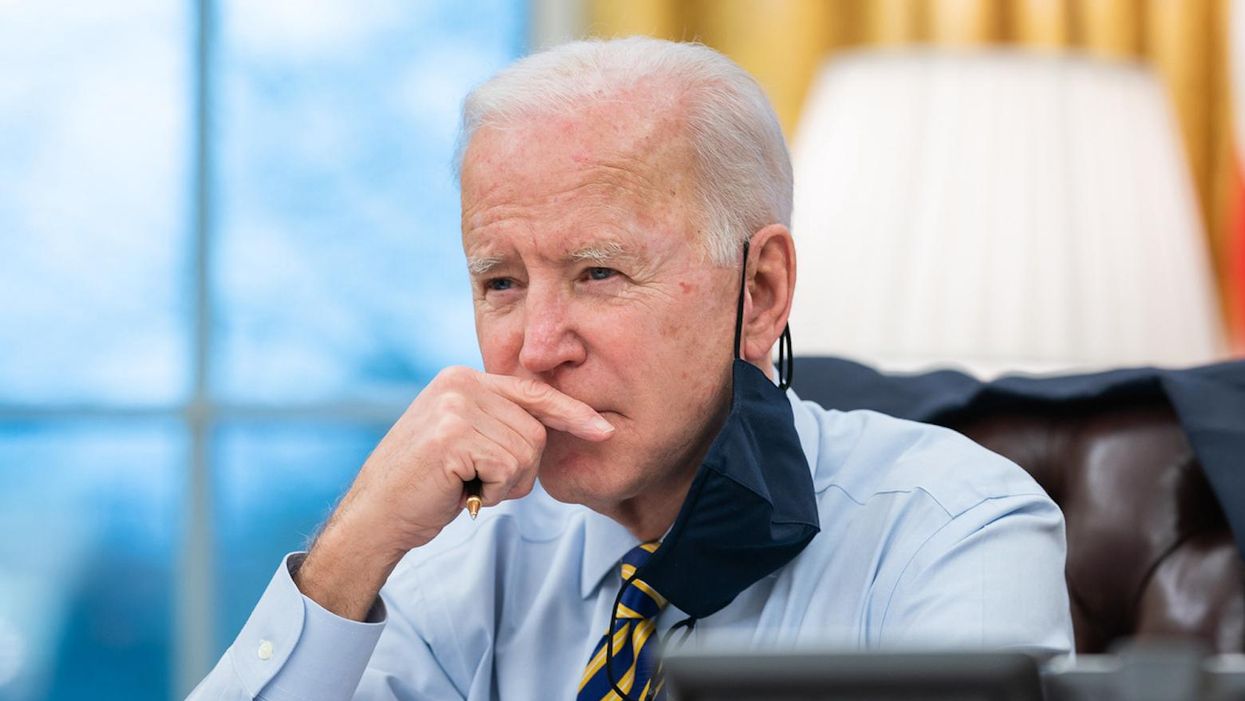 President Joe Biden participates in a conference phone call with governors affected by a snowstorm in the Midwest and southwest Tuesday, Feb. 16, 2021, in the Oval Office of the White House. (Official White House Photo by Lawrence Jackson)
Jessica Corbett
and
Common Dreams
March 01, 2021

"The Trump administration's moves to lock-in last-minute regulatory rollbacks were plagued with unprecedented and unlawful legal tactics that make them much more vulnerable to reversal," said Matt Kent, regulatory policy associate for Public Citizen and co-author of the group's new report.

The progressive advocacy organization is urging Biden to expand the scope of his freeze memo from January 20 to include 25 more midnight regulations issued under former President Donald Trump—"many of which will harm consumers, workers, the public's health and safety, and the environment."

Those 25 deregulatory actions, "including some of the most egregious and damaging rollbacks of public protections produced during the entire Trump administration," violated the "obscure but powerful" Congressional Review Act (CRA), according to Public Citizen.

Under the CRA, regulations only take legal effect after they are published in the Federal Register and submitted to the U.S. House of Representatives and Senate. Public Citizen's report highlights regulations that weren't sent to either or both bodies of Congress before Biden issued his memo shortly after taking office.

There are also multiple rollbacks, "particularly from the Environmental Protection Agency (EPA), that were made legally effective immediately in potentially unlawful fashion and would have been subject to the regulatory 'freeze' if those rollbacks had legally proper effective dates," the report says.

As report co-author and Public Citizen regulatory policy advocate Amit Narang put it: "Trump's sloppiness and incompetence has created an opening to undo some of the damage caused by his destructive anti-regulatory agenda."

"Since many of Trump's last-minute regulatory rollbacks technically were not on the books when Biden took office, Biden can immediately freeze potentially dozens of them, making it easier to eventually undo them," Narang added.

The report explains that applying the memo to these 25 regulations follows precedent:

If the Biden administration was to take this action, not only would it be a natural and non-controversial reading of the scope of Biden's regulatory "freeze" memo, but it would also rest on the very same interpretation of the CRA that conservatives and Republicans in Congress asserted back in 2017. For example, Sen. Pat Toomey (R-Pa.) argued that because a guidance document issued by the Consumer Financial Protection Bureau in 2015 had not been submitted to Congress under the CRA, it had never taken legal effect. This allowed Congress to use the CRA to repeal the guidance document in 2018 three years after It was issued. With that backdrop, there is little basis to criticize President Biden for relying on the same interpretation.

Public Citizen, the report acknowledges, "is no fan of the CRA" and has even called for its repeal, "because it introduces more political and corporate influence in a regulatory process that should be driven by science, data, evidence, and agency expertise, and also because it is a poorly drafted law that creates significant uncertainty for agencies in numerous respects."

However, the report adds, "the CRA is still the law, and it is quite clear that the last-minute regulatory rollbacks from the Trump administration violated the CRA in many instances."

Over half of the 25 Trump-era rollbacks in the report—which are detailed in a series of charts sorted by topic—relate to energy and the environment, from eliminating safety and inspection requirements for offshore oil and gas drilling operations to opening the Tongass National Forest in Alaska to logging.

There are also multiple actions related to consumer and civil rights, immigration, and labor. Additionally, there is one related to finance and another on agriculture.

They range from narrowing asylum eligibility and shielding corporate giants from liability for franchisees' labor law violations to enabling more discrimination against LGBTQ people on "religious liberty" grounds and allowing federal executions by not only lethal injections but also firing squad and the electric chair.