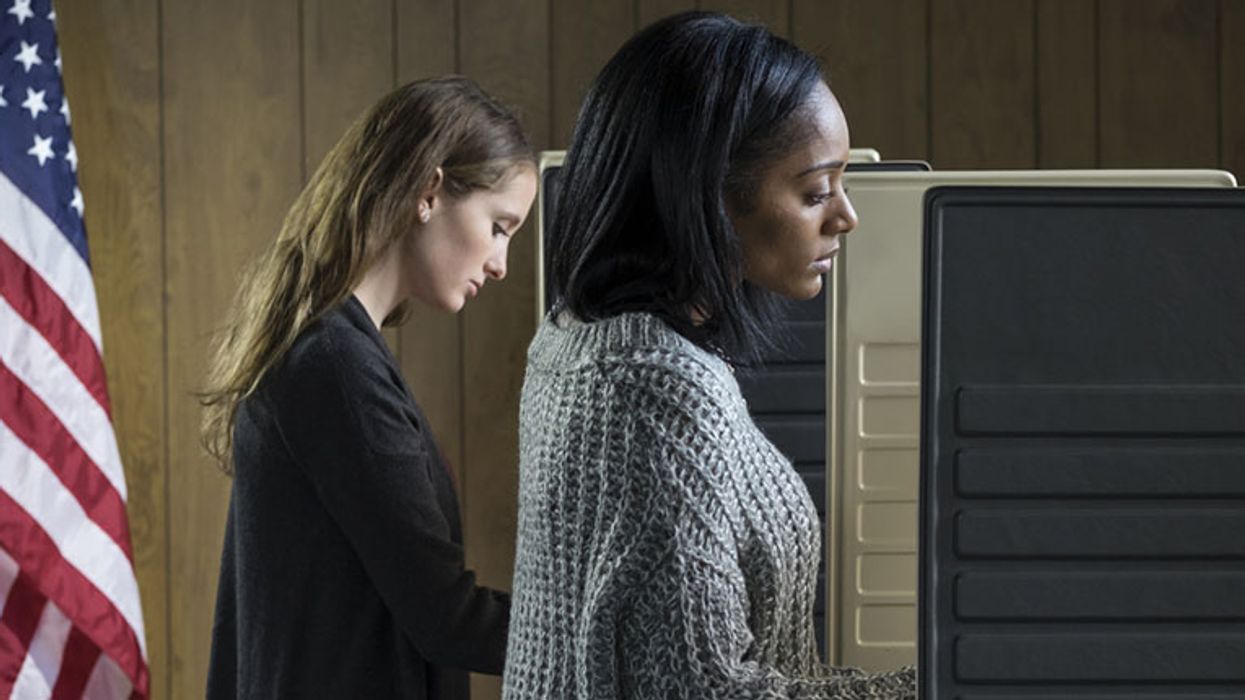 Not every state's voters determine which party wins congressional majorities and the presidency. But among the states that tip these outcomes, partisan battles over the ease or difficulty of voting have become ongoing features of their political life—bleeding over from completed elections into state legislative sessions and forcing voters and local election officials to pivot as the cycle continues.

In America's 2020 general election, voters had more options than ever to vote—due to state responses to the pandemic. They set turnout records. But partisan fights over voting rules did not stop after Election Day, nor after the Electoral College met, nor after Donald Trump supporters stormed the U.S. Capitol.

In January, as lawmakers convened in the battleground states with Republican governors and GOP-majority statehouses, Republicans introduced a wave of restrictive voting legislation. Not every bill had traction, but bills rolling back access to a ballot and options to return it moved in Iowa, New Hampshire, Georgia, Arizona, Florida and Texas. In March, Iowa became the first state to enact rollbacks into laws, immediately triggering a lawsuit claiming that the restrictions violated its state constitution's right of equal access to a ballot. Advocates for Latino voters and the Democratic Party filed the lawsuit.

Republicans introduced similar bills in other battleground states with Democratic governors, such as in Michigan, Nevada and Wisconsin. But unlike in the red-led states where some of the bills may yet become law, these states lack sufficient numbers of Republican legislators to override gubernatorial vetoes. In other words, their efforts attacking voting and undermining confidence in the most democratic of public institutions are posturing mostly intended to placate their base after Democrats swept control of Congress and the White House.

Either way, partisan fights over the options to access and cast a ballot appear to have become an ongoing feature in battleground states. This development is akin to what campaign consultants first coined as a "permanent campaign" during the 1970s, referring to nonstop "image making and strategic calculation." The most disturbing aspects of permanent campaigns, according to scholars, are how they disrupt and distort political representation, governing and now, voting.

"No one planned such an emergent pattern in the general management of our public affairs, yet it now seems to lie at the heart of the way Americans do politics—or more accurately—the way politics is done to Americans," wrote Hugh Heclo, for the joint publication in 2000 from the Brookings Institution and American Enterprise Institute on permanent campaigns.

With fundraising, the endless drive to raise big money skews a candidate's time and attention. With voting, many lawmakers are driven to revise the rules to benefit their party. After 2020, some Democrat-led states, like Virginia, passed several laws expanding ballot access. But many more Republican-led states have sought to make voting harder. These power grabs often ignore warnings from election officials about deliberately complicating the process for voters and election administrators, which is what has been unfolding in Florida over a Republican proposal to ban absentee ballot drop boxes.

Another feature of the permanent voting wars is the nonstop campaigning that now surrounds the rules for casting ballots. In Georgia, for example, which arguably has the nation's most intense post-election battles—after ex-President Trump lost its 2020 general election and its two GOP senators lost in January's runoffs—Democrats and their allies have responded to restrictive GOP bills with lobbying, media and calls to boycott Republicans' corporate donors. Ahead of the early March NBA all-star game, superstar LeBron James' and his More Than a Vote group created a TV ad criticizing the Georgia rollbacks and emphasizing that this is a long-term struggle for representative government.

The GOP efforts in red-led swing states are also striking. Notably, Republican lawmakers are justifying their proposed rollbacks by citing falsehoods about voters and voting. The most activist Republican lawmakers continue to cast doubts about the legitimacy of 2020's presidential results, even after ex-Trump administration officials—starting with former Attorney General William Barr—stated there was no widespread election fraud. The professional organizations for top state election officials have repeatedly said that 2020's general election was the most transparent, secure and problem-free exercise in decades—from a voting and vote counting perspective. But that hasn't stopped GOP attacks.

Some of these lies have been around for years, such as falsely claiming that the country is plagued by massive illegal voting—voter fraud by Democrats. Other lies are newer, such as Trump's evidence-free claim of millions of stolen votes.

While what unfolds inside statehouses may appear to be inside local political ecosystems, some of the falsity-filled messaging and strategic calculations are coming from the Republican National Committee and its top partisan allies.

As Mandi Merritt, an RNC spokeswoman, recently told the Washington Post, the national party "remains laser focused on protecting election integrity, and that includes aggressively engaging at the state level on voting laws and litigating as necessary." She continued, "Democrats have abandoned any pretense that they still care about election issues."

On March 8, Fox News reported that Heritage Action, the grassroots front of the right-wing Heritage Foundation—which has, for years, perpetuated a myth that illegal voting is widespread and a blight—"plan[ned] to spend at least $10 million on efforts [media and ads] to tighten election security laws in eight key swing states."

"Fair elections are essential," said Heritage Action Executive Director Jessica Anderson. The group's website had links to a February 1 "factsheet" that listed purported problems that largely do not exist—such as failures to update voter rolls. (More than half the states cooperate on this task, including sharing more reliable data than these partisans advocate.)

While Heritage Action's swing-state ads will seek to sound authoritative as they fan fears about voting, its much-hyped "Election Fraud Database" bears scrutiny. Nationally, in 2020's election cycle, where more than 155 million people voted for president—and tens of millions more voted in primaries—Heritage's database only cited five examples of illegal voting by individuals. It cited examples of people illegally signing qualifying petitions for candidates and ballot measures, and also falsifying absentee ballot applications in 2020. But these latter illegal activities were detected by officials and prosecuted, meaning, among other things, that this handful of potentially illegal ballots were caught, not cast. More importantly, Heritage's numbers attest to the fact that illegal voting is very rare and almost always detected before it counts.

But such facts are often lost when more simplistic partisan disinformation and smears race ahead, often amplified by social media sites that elevate incendiary content that attracts readers, which is what advertisers seek. Such propaganda perpetuates fake narratives that mask the real agenda: gaming election results.

The reality of permanent campaigns to reshuffle voting options and rules in battleground states is yet another sign that an even-handed federal response is called for. Whether the remedy is the Democrats' omnibus election reform bill, H.R. 1, or the narrower restoration of the Voting Rights Act's enforcement provisions, the John Lewis Voting Rights Advancement Act, remains to be seen. But as Brooking and AEI scholar Hugh Heclo noted a generation ago, the "permanent campaign" was eroding foundational features of representative government.

"[B]y the beginning of the twenty-first century, American national politics had gone past a mentality of campaigning to govern. It had reached the more truly corrupted condition of governing to campaign," he wrote. "It is no exaggeration to use the imagery of true 'corruption' in its classic sense—something much darker than money or sex scandals."

"We can know quite well from history when democratic politics is passing from degradation to debauchery. That happens when leaders teach a willing people to love illusions—to like nonsense because it sounds good. That happens when a free people eventually come to believe that whatever pleases them is what is true."