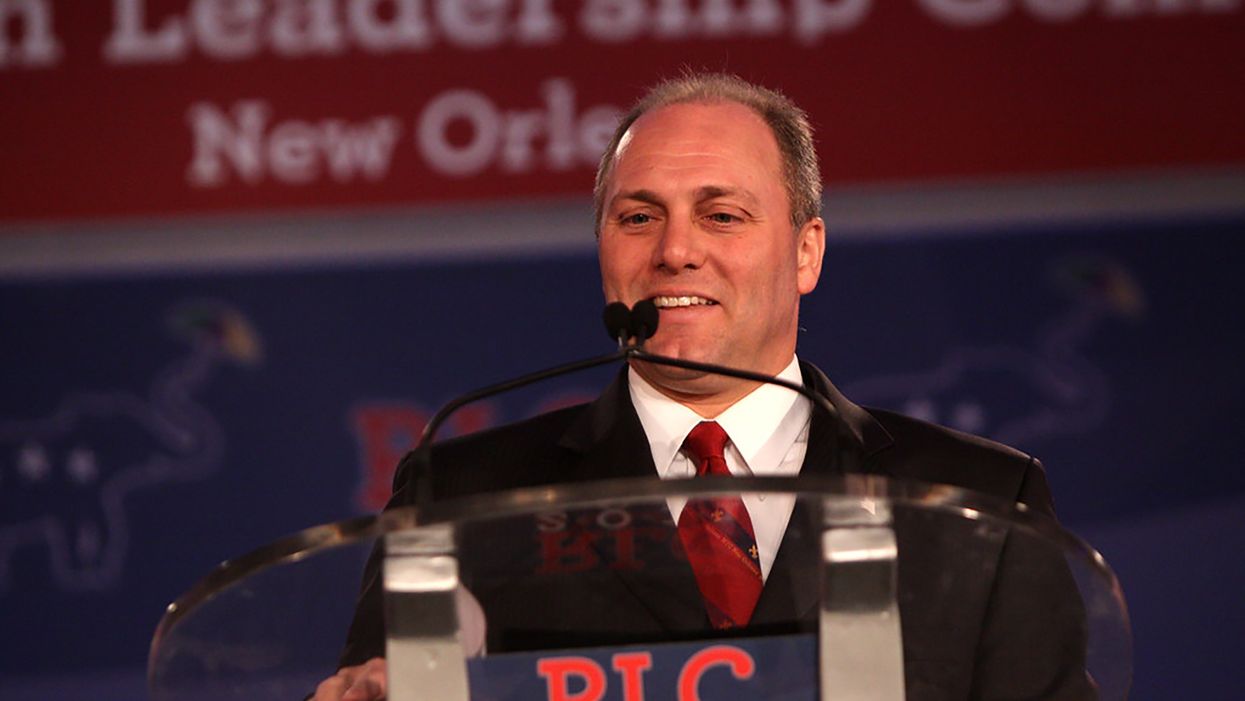 House Minority Whip Steve Scalise (R-LA) is being criticized and mocked after posting a tweet insisting Americans should be "outraged" by the Democrats' voting rights bill that passed the House Wednesday night by a slim 220-210 margin. His tweet caused "outraged" to trend on social media.

The bill, HR1, protects and expands the right to vote and has been met with fear-mongering, lies, and twisted "facts" from the right. Republicans know the more Americans vote, the less likely GOP candidates are to win elections, as an RNC attorney told the Supreme Court this week.

Among those twisted facts are the ones Rep. Scalise included in his tweet:

Every single American should be OUTRAGED by this: Democrats just voted to ban voter ID nationwide and force every… https://t.co/rGz7VmZSDW
— Steve Scalise (@Steve Scalise) 1614831579.0

Based on a February 3 reports by the fact-checkers at Politifact, Scalise is wrong.

HR1, also known as the For the People Act, does not ban photo ID nationwide, nor does it force every state to permanently expand mail-in voting – although voting rights experts agree it should do both.

"The legislation doesn't expressly ban voter ID, but it does include a work-around for voters that already exists in some states," Poilitfact reports, adding that it does call voter ID laws "excessively onerous."

"The bill says that if a state has a requirement for an individual to present an ID to cast a ballot, the state shall permit the individual to present to election officials a sworn written statement under penalty of perjury attesting to the individual's identity and that they are eligible to vote," which "is actually a common practice used in several states," according to David Becker, executive director of the Center for Election Innovation & Research.

On Scalise's claim HR1 forces "every state to permanently expand mail-in voting," that too is false.

"The bill does not mandate voting by mail, but it aims to make it easier for voters to cast ballots by mail if they wish."

"For example, the bill says that states can't require a voter to provide an ID to vote by mail or require notarization or witnesses of voters' signatures to cast an absentee ballot. But states can still set some rules, such as deadlines to request a ballot."

Scalise is spreading dangerous disinformation – which, given the grave threats on the nation's Capitol today that are forcing Congress to not meet out of caution over potential deadly violence, is even more dangerous that he is choosing to do this now.

But it's important to note that many assumed his characterizations of the For the People Act were accurate – and want them to be included in the legislation, showing just how outside the mainstream Scalise's views are.

Here's what some are saying in response to his tweet:

While we're at it, I'm OUTRAGED that basic things like mask-wearing during a GLOBAL PANDEMIC have been politicized.… https://t.co/TlKYn3oO0y
— Colin P. Clarke (@Colin P. Clarke) 1614864521.0

Be outraged that GA Republicans want to make voters wait for hours while also making it criminal to hand them water… https://t.co/uOAiXnHc71
— Chris Hahn (@Chris Hahn) 1614865018.0

What folks should actually be outraged about is every House Republican voting against covid relief and survival che… https://t.co/VcmZVbHU5q
— Thomas Kennedy (@Thomas Kennedy) 1614862191.0