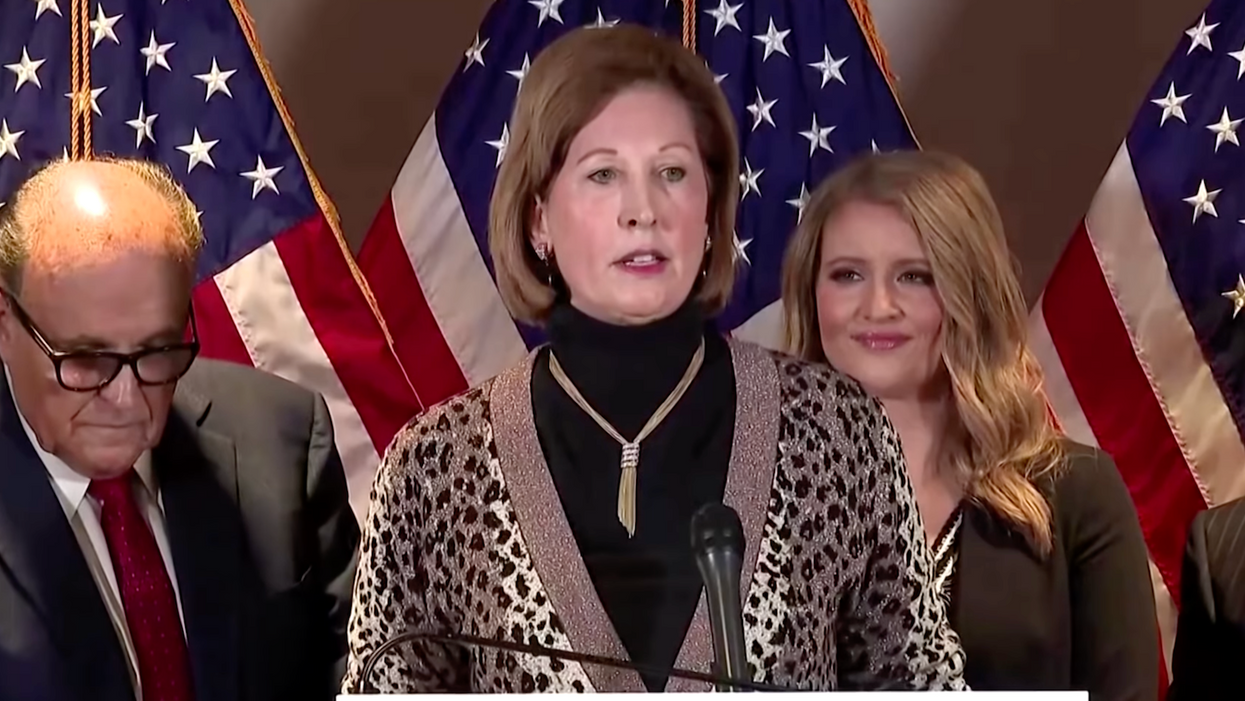 This week, Fox News' legal department learned that Dominion Voting Systems has filed a $1.6 billion defamation lawsuit against the right-wing cable news outlet — and this comes in addition to the $2.7 billion defamation lawsuit from Dominion competitor Smartmatic that Fox News was already facing. A far-right attorney who helped to pave the way for Fox News' legal woes is Sidney Powell, who repeatedly made the false claim that Dominion's voting technology helped now-President Joe Biden steal the 2020 presidential election from former President Donald Trump.

Media Matters and conservative pundit David French are among those who have pointed out the problems that right-wing media outlets have caused themselves by taking Powell's claims seriously.

Washington Post reporters Elahe Izadi and Paul Farhi, reporting on Dominion's lawsuit against Fox News, note, "In the suit, filed in a Delaware court, Dominion argued that the Fox and several of its on-air personalities elevated conspiracy theories about the voting company rigging the 2020 election and allowed falsehoods by their guests to go unchecked, including a wild claim that the company's machines were manufactured in 'Venezuela to rig elections for the dictator Hugo Chávez' and that Dominion's algorithm manipulated votes so that then-President Trump would lose."

After Powell, in late 2020, accused Dominion of having been helpful to the late Chávez, the company corrected her claim by responding that its technology had never even used in Venezuela — at all. Powell herself is the target of a separate defamation lawsuit from Dominion, and Never Trumper French lays out some of the problems with her defense in a Twitter thread posted this week.

As she has sought to defend herself from the legal peril she has opened up, Powell is effectively pulling the rug out from any media organization or public figure who took her seriously.

French, a former National Review staff writer with a legal background, explains, "If you're Powell's lawyers, you've got a huge challenge. You have a client who spent weeks stating provable falsehoods that were amplified and spread to millions of Americans through some of America's most popular outlets for news and commentary. Not great. You can't admit to the lie. That would essentially admit 'actual malice.'"

In a defamation lawsuit, the plaintiff must prove actual malice. French notes that there are "different kinds of false factual assertions," and they range from "truly potentially damaging lies" to "obviously wild and insane accusations." Powell, according to French, is now trying to defend herself against Dominion by saying that her statements about the voting technology company fall into the latter category.

"In other words," French writes, "the argument isn't that Powell's lying. It's that she was OBVIOUSLY making wild claims. They're saying, 'C'mon man. She might believe it, but no reasonable person does.' But that's implicitly tossing a ton of right-wing media figures under the bus…. For weeks, they were broadcasting the claims of a person who her own lawyers say was making claims that 'no reasonable person would conclude' were 'truly statements of fact.'''

The fear that right-wing media outlets now have of being sued for defamation by Dominion or Smartmatic is evident in a recent broadcast by Fox News competitor Newsmax TV. When the stridently pro-Trump MyPillow CEO Mike Lindell appeared on Newsmax in early February, he tried to promote the false claim that Dominion helped Biden steal the election — and host Bob Sellers quickly shut Lindell down, obviously fearful of a lawsuit, and stressed, "We at Newsmax have not been able to verify any of those allegations."

Dominion has filed a lawsuit against Lindell in addition to its lawsuits against Powell and Fox News.

According to Ariane de Vogue, Supreme Court reporter for CNN, Powell may be facing "real legal jeopardy" because her defense in the Dominion lawsuit is at odds with her defense in a motion for sanctions against her in Michigan — one of the states where Powell fought to overturn the presidential election results.

"In the two cases, both still pending, her lawyers appear to contradict each other," de Vogue writes. "In the defamation case filed by Dominion, her lawyers claim, in a motion to dismiss, that what Powell said about voting issues could not reasonably be established as fact at the time she said it. In the Michigan case, her lawyer calls allegations that she lied 'outrageous' and 'entirely unacceptable.'"

Ted Boutrous, a constitutional law expert, told CNN, "The 1st Amendment provides strong protections for statements of opinion, but what Dominion is pointing to is the fact that Ms. Powell was declaring that she had evidence of this fraud and this election malfeasance and she was declaring that as a matter of fact. The 1st Amendment doesn't protect knowingly false statements of fact."

Stephen Gillers, a professor of legal ethics at New York University law School, told CNN, "Even opinions can be defamatory if they imply facts that are false and Powell knew it or recklessly disregarded the truth or falsity of the implied facts. Her problem is that her defense in the defamation case is going to sink her in the Michigan case."

Media Matters has reported extensively on how quick Fox News and Fox Business were to promote debunked claims of widespread voter fraud in the 2020 presidential election — including Powell's. This week, Media Matters updated an article that was originally published on January 21 by noting, "Update (3/26/21): Dominion Voting Systems has reportedly filed a defamation lawsuit against Fox News."

The lengthy article offered a wealth of details on opinion hosts at Fox News or Fox Business who were quick to promote false claims about Dominion from Powell and other Trump allies and reported them as fact. The piece, written by a team of Media Matters reporters, shows that former Fox Business host Lou Dobbs repeatedly accused Dominion's technology of promoting election fraud — and that Fox News' Sean Hannity "pushed the narrative that Dominion machines had suspiciously switched votes in Pennsylvania." No serious evidence of these claims has ever been put forward — as Powell is all but confirming as her lawyers argue no one should have even believed them in the first place.

The Media Matters piece shows Dobbs, Hannity, Jeannine Pirro, Maria Bartiromo and others at Fox painting Dominion in a sinister light and not even bothering to vet the claims of pro-Trump attorneys.

In its lawsuit against Fox News, Dominion argues, "Fox sold a false story of election fraud in order to serve its own commercial purposes, severely injuring Dominion in the process."