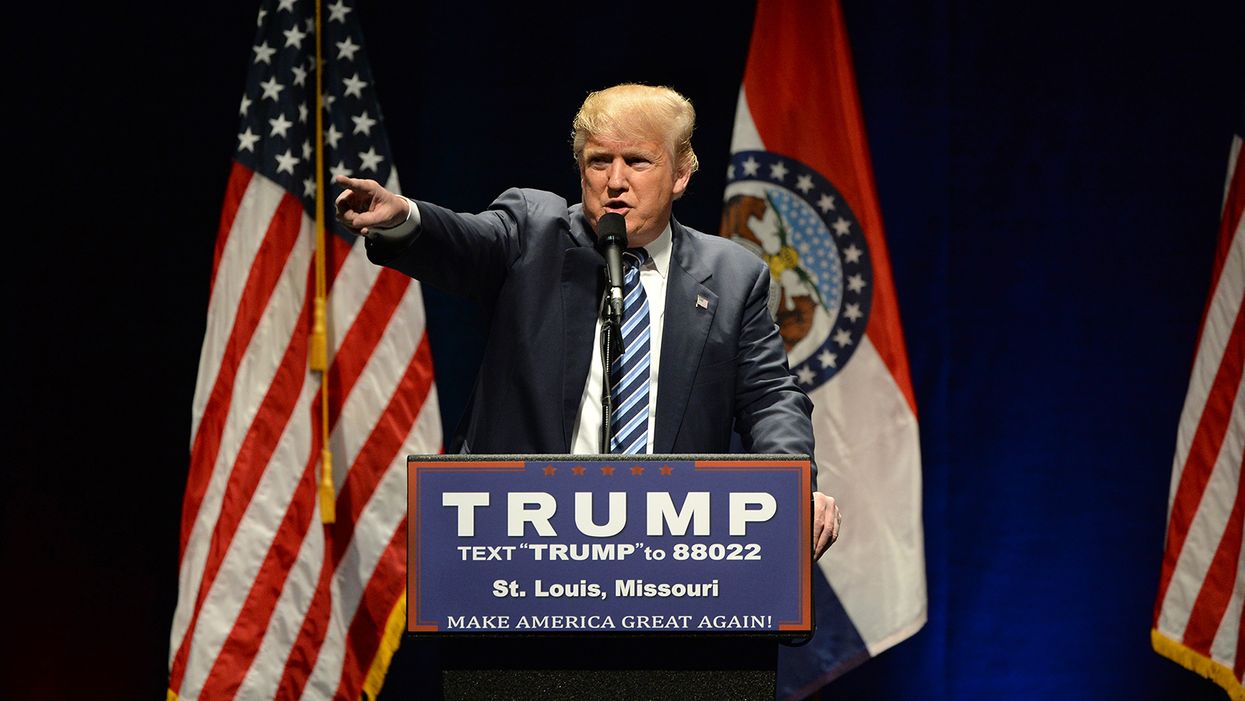 Republican Gov. Brian Kemp has one word for how he felt signing a new law aimed at making it significantly harder for people — especially people of color and people living in urban neighborhoods — to vote in Georgia: "Proud."

"I was proud to sign S.B. 202 to ensure elections in Georgia are secure, fair, and accessible. I appreciate the hard work of members of the General Assembly to make it easy to vote and hard to cheat," Kemp tweeted on Thursday, sending out a photo that drew immediate comparisons to an infamously repugnant 1960s era Alabama governor.

There is, of course, no evidence of voters cheating in Georgia elections, or that the new law — which imposes onerous restrictions on voting, makes it easier to challenge the eligibility of voters, and opens the door to GOP takeovers of election boards — in any way addresses fraud. The law does ban handing out water to people waiting in line to vote, however. Of course, that's not about preventing cheating but making sure voters are physically unable to handle the long lines in certain neighborhoods that were created by previous assaults on voting access. "Cheating" — like "fraud" — is one of those Trumpian code words to smear Black voters and imply there's something inherently illegitimate about people of color having the franchise.

While Kemp would undoubtedly deny the racist intent of the law if asked outright, the visuals behind his signing photo were unmistakeable. As journalist Jill Filipovic pointed out on Twitter, "a photo of all white men signing a bill that cements their political power by disenfranchising Black voters" is "not a gaffe," but "a deliberate message." In case anyone was missing the message, another set of visuals drove it home: State Rep. Park Cannon, a Black Democrat, being arrested for asking to attend the signing ceremony.

It might be hard to accept that Georgia Republicans, in the year 2021, would be actively trying to draw comparisons to segregationists and white supremacists of old. It's often assumed in the media people universally view the George Wallaces and Bull Connors as villains that no one would want to emulate or be likened to. But the grim truth is that Donald Trump's continuing popularity with the Republican base sends a clear signal to GOP politicians that their voters want their racism raw and unvarnished, not swaddled in the winks and code words that Republican leaders have long clung to for plausible deniability. So it's likely that Kemp is not only aware that the visuals from Thursday's signing, but that was what he was going for, knowing that the same ugly urges that fueled the pro-segregation movement in the 60s are fueling the Republican party now.

For further evidence, look to Tennessee, where Republicans in the state legislature are waging an all-out battle to preserve and honor the memory of the Ku Klux Klan's first Grand Wizard.

Slave trader and Confederate leader Nathan Bedford Forres is an infamous figure, even by the standards of his fellow Confederate generals. Before he helped start and lead the KKK, he spearheaded one of the ugliest war crimes of the Civil War, the Fort Pillow massacre, in which captured Union soldiers, most of them Black, were murdered rather taken prisoner. Forrest was revived as a "hero" in Tennessee in the 1960s and 1970s by segregationists who were lashing out at the gains made by Black Americans in the civil rights era. A holiday honoring Forrest started in 1969 and a bust of his head was erected in the state capitol in the 1970s.

Democrats in recent years have understandably been trying to end the holiday and get rid of the statues honoring Forrest since these continued traditions are the moral equivalent of Germany having an annual Hitler Day and putting up statues honoring goose-stepping Nazis. But these efforts have met an unbelievable amount of resistance from Republicans. They are whining about "cancel culture" as if that is somehow worse than celebrating a racist war criminal and terrorist.

But despite an emotional presentation on Tuesday by Democratic Rep. London Lamar, in which she pointed out that Forrest "would rape me" and "take me away from my family" if "he was alive today," the Republican-controlled general assembly refused to take the annual Nathan Bedford Forrest Day off the calendar.

The battle over the bust in the capitol building is even nastier. In 2013, 2016, and 2017, Republicans in the assembly passed a laws meant to make it significantly harder for both state and local governments to remove statues honoring Confederate leaders. Despite the obstacles, however, the state historical commission successfully voted earlier this month to remove the bust of Forrest in the state capitol. In response, state senators are moving to replace nearly the entire commission with lackeys who will keep the bust in place.

There is, of course, the usual lip-smacking from Forrest defenders about how this isn't racism but "preserving history." No one should buy that excuse, as there are ways to preserve history — perhaps honoring Forrest's many victims? — without treating a KKK leader like a state hero. The likelier story is the simpler one: Republicans in the state are super racist and want to honor the first Grand Wizard of the KKK to celebrate white supremacy.

Same story in Georgia. There's no point in tying ourselves in knots trying to find some more flattering story for what Kemp and his fellow Republicans are up to. They know they look racist. They're likely counting on it.

Trump may be gone, but the lessons his presidency imparted on Republican leadership clearly will linger. Republican politicians believe a little more shameless racism is what gets their base motivated and activated, and frankly, they are likely correct in this belief. Progressives need to respond by redoubling their efforts at anti-racist activism and registering people of color to vote. The only way that racism is defeated is an overwhelming show of political power because clearly, appealing to the better angels of white conservatives isn't working.